With the modern touchscreen smartphones having put old-school flip phones out of commission for the most part, it is not very often that we see one in use anymore. But over the past couple of years, companies like Samsung and LG have been coming out with a few Android-based smartphones in the clamshell form factor, in the belief that the retro-chic appeal of such devices will be able to create a large enough niche for the devices to be commercially viable, especially as there's hardly any competition in the category from many manufacturers. While such recent launches haven't yet become mainstream, they have reportedly been selling well enough for the two South Korean companies to persist with their yearly launch schedules for such devices, which have thus far been restricted to East Asian markets for the most part.

Talking about flip-phones from the two South Korean consumer electronics giants, one of them – Samsung – is now apparently readying its next generation Android flip-phone as part of its Galaxy Golden lineup of devices. An all-new handset with model number SM-W2016 has now showed up on the GFXBench database, and is believed to be the next in line to be released as part of the company's Galaxy Golden lineup of flip-phones it has been releasing over the past few years. While it's not immediately clear whether the phone will ultimately be launched commercially as the Galaxy Golden W2016 or if it will get a more mainstream nomenclature, the GFXBench listing definitely outs a lot of the hardware specs, which make for interesting reading. Mind you, the device has already previously been spotted on India's import / export tracking website Zauba, where the pre-tax, pre-markup price seems to be around $400 – $520.

Coming to some of the hardware on offer in the upcoming device, the smartphone will apparently feature a 4.6-inch display with a resolution of 1280 x 768 pixels. It will be powered by an Exynos 7 series chip with an octa-core CPU clocked at a frequency of 2.1 GHz and a Mali-T760 MP8 GPU from ARM. The device will come with 3 GB of RAM and 64 GB of internal storage. As for the cameras, the smartphone will have a 16-megapixel primary camera and a 5-megapixel front-facing selfie-cam, both of which will be able to record 1080p videos. The listing also reveals the device will ship with Android 5.1.1 Lollipop out of the box, and have support for LTE, NFC and Bluetooth. Sensors will include GPS, barometer, accelerometer and proximity. 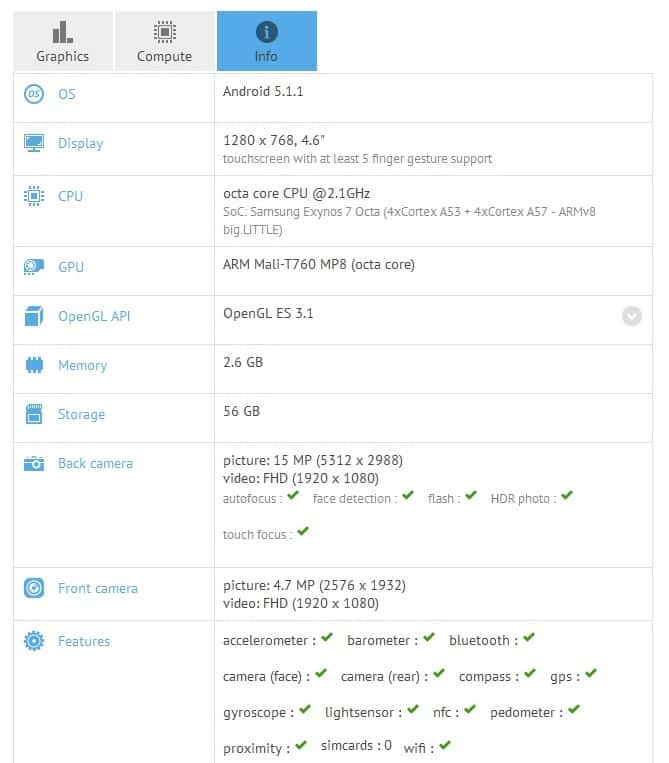 Sponsored Video
Advertisement
Trusted By Millions
Independent, Expert Android News You Can Trust, Since 2010
Publishing More Android Than Anyone Else
12
Today
150
This Week
525
This Month.
525
This Year
110693
All Time
Advertisement