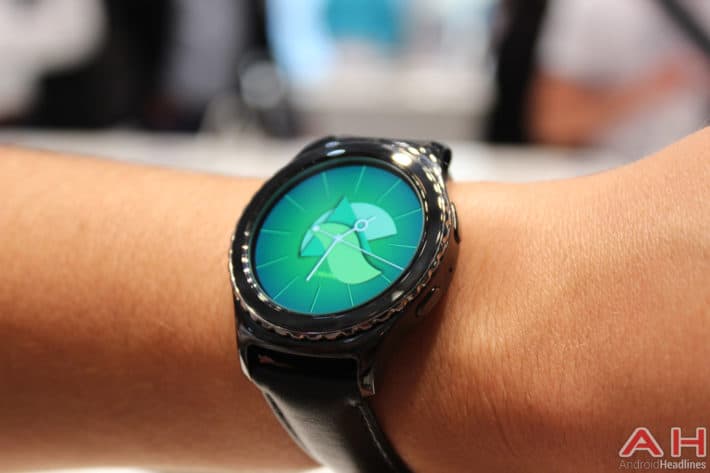 Samsung's Gear S2 is the company's first approach into a device with a circular display. They chose that particular design not only to make it look like something that consumers are already used to wear every day, but also to make the rotating bezel surrounding the screen an integral part of how the device actually works. This mechanism actually allows users to interact with the watch without covering the screen in some situations, although it does have a touchscreen as people are now used to them.

The Gear S2 series is actually integrated by three models, the regular Gear S2 and the 3G version look a little more futuristic than the so-called Gear S2 Classic version, but all of them share some internals including the 1.2-inch circular display with a resolution of 360 x 360 pixels, 512 MB of RAM and 4 GB of internal storage. They are also IP68 certified to make them resistant to water or dust and they include the same sensors. Although they run Samsung's Tizen OS, the company has now made them compatible with some Android smartphones that are not made by the company.

These watches will start selling tomorrow in the US and now we know the kind of packaging that Samsung will be using thanks to some pictures from TizenCafe.net. The pictures show the box of the Gear S2 Classic, which is black and cylindrically shaped referencing to the shape of the display. It has the name of the watch on the top and the surface on the side has a glossy finish. The first thing users will get to see when they open the box is the watch itself and beneath that layer, the box contains the charging cradle, a charging cable and an additional strap, which is a little shorter to fit smaller wrists. To be honest, the box looks quite similar to the original box of the original Moto 360, even the charging cradle offer similar functionality, so it would have been nice to see Samsung do something more radical for their first round smartwatch. It is still unknown if the two other watches will get different packaging.