Skip to content
Trusted By Millions
Independent, Expert Android News You Can Trust, Since 2010
Publishing More Android Than Anyone Else
3
Today
144
This Week
605
This Month
6353
This Year
116331
All Time Do we have a good one for you – the legendary Samsung Galaxy Note 5 goes up against the brand new LG V10 phablet.  The Galaxy Note 5’s explanatory multitasking Super AMOLED display goes up against the QHD Quantum IPS display with a secondary screen.  Both devices have a premium build quality – the Galaxy Note 5 is metal and glass and is the more luxurious looking of the two, although the more fragile device.  The LG V10 is more solid with a stainless steel and silicone Dura Guard clad body – it is well protected against drops and shocks, providing a superior grip, although it gives up a little in the looks department.

These two premium devices do have a few things in common, starting with their physical size, although the LG V10 weighs in at 192 grams versus the Note 5 at 171 grams.  They both have a Quad HD (QHD) 5.7-inch display, but they do use different technologies.  The Note 5 and LG V10 both have 4GB of RAM with the Note 5 using the newer and faster, DDR4 technology versus the DDR3 RAM in the LG V10.  You can get 64GB of internal memory in both – the Note 5 uses the newer and faster UFS 2.0 flash memory with no way to expand, while the LG V10 has a microSD slot for expansion.  Both cameras are using a 16MP sensor for the main camera with the Note 5 uses a single 5MP front-facing camera (FFC) and the new LG V10 uses dual 5MP FFCs.

Both devices have their speaker on the bottom of the device and they both have fingerprint sensors.  The Note 5 and LG V10 each have a 3000mAh battery – the Note 5’s is non-removable and the LG V10’s is removable…both offer a rapid charge feature. They both have the usual suspects – Wi-Fi, Bluetooth (4.2 on the Note 5 and 4.1 on the LG V10), GPS, NFC and a microUSB port for charging and data transfer. 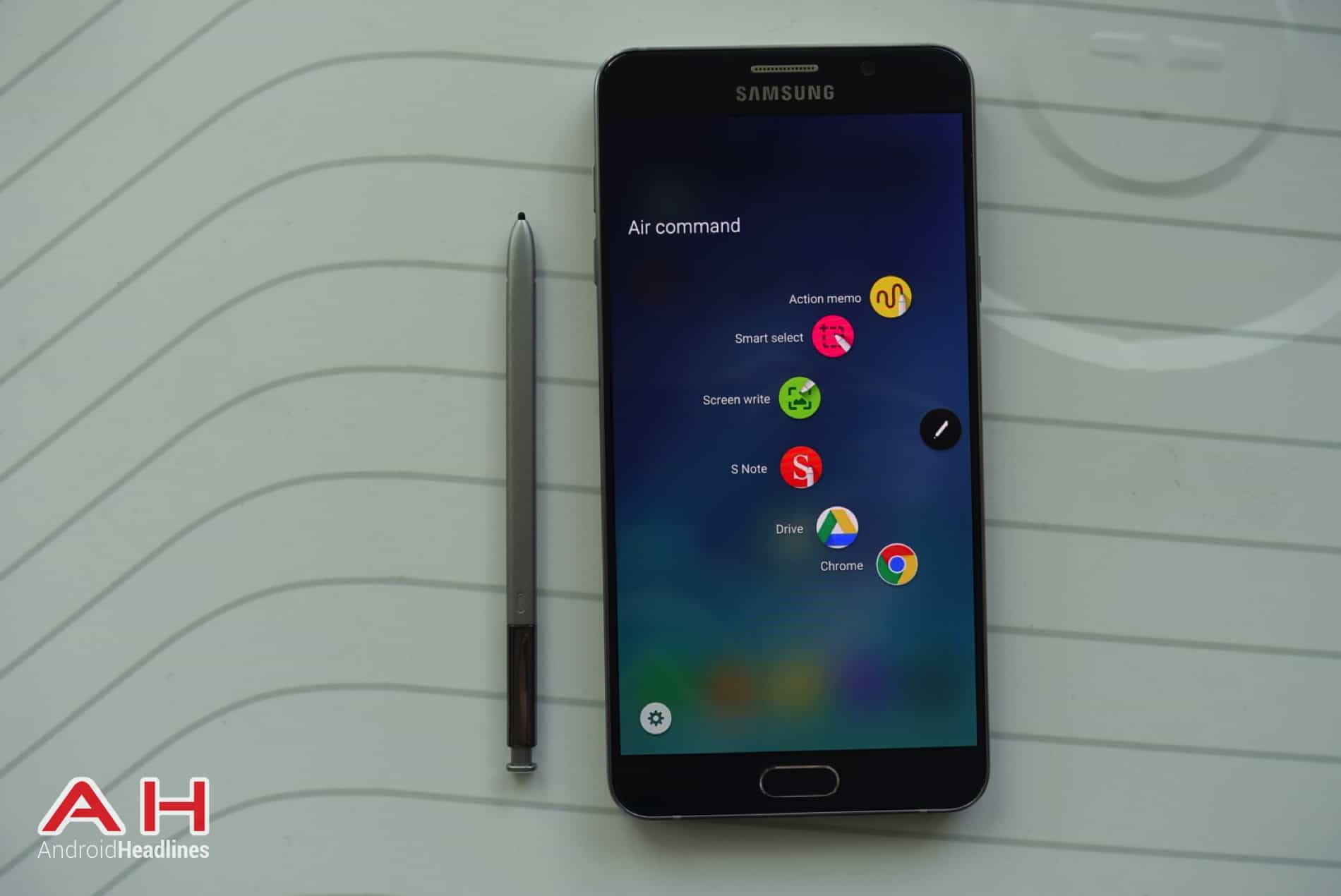 The Samsung Galaxy Note 5 is a stretched out Galaxy S6 – from a 5.1-inch display to a 5.7-inch display, added a few things and deducted a couple of things.  The RAM increased from 3GB to 4GB, but they did away with the 128GB option.  Samsung also removed the IR Blaster – a mainstay with Samsung on the S series and Note series.  These changes, along with the non-removable battery, did not go over well with many Note 5 customers as Samsung always improved the camera area and/or processor over the Galaxy S series.  The Note 5 is probably the most advanced smartphone currently on the market, but we expect more technical superiority in the Note series.

The Galaxy Note 5 is sporting the same size 5.7-inch display as the past two years with Samsung implementing improvements every year.  It uses a QHD Super AMOLED display with a resolution of 2560 x 1440 pixels and 518 PPI and is one of the best displays on the market.  This goes up against the QHD Quantum IPS display found on the LG V10 with 515 PPI – it also has a secondary display that is 160 x 1040 pixels.  The Note 5 uses Samsung’s 64-bit Exynos 7420 octa-core processor with four cores clocked at 1.5GHz and the other four cores clocked at 2.1GHz.  This goes up against the 64-bit Snapdragon 808 hexa-core processor in the LG V10.  The Note 5 packs 4GB of faster DDR4 RAM rather than the 4GB of DDR3 found in the LG V10.  When it comes to internal storage, the Note 5 has a 32GB or 64GB option of much faster UFS 2.0 Flash memory and no room for expansion.  The LG V10 offers only one option – 64GB, but a microSD card slot for internal memory expansion.

The main camera on the Galaxy Note 5 is the same one used on the Galaxy S6, which means it is one of the best cameras on a smartphone.  It has a 16MP Samsung ISOCELL sensor with a fast startup, faster autofocus, large aperture at f/1.9, Live HDR and great software.  The Note 5 also has a large 5MP FFC with the f/1.9 aperture and wide-angle and Live HDR for selfies and video chats.  This compares to an excellent 16MP main camera on the LG V10 and a dual 5MP FFCs.  The Note 5 has a non-removable 3000mAh battery, but it has quick charge and quick wireless charging capabilities…the LG V10 also has a 3000mAh removable battery with a rapid charge battery.

The Galaxy Note 5 has a fingerprint sensor, heart rate and oxygen saturation sensors, is Samsung Pay capable and PayPal certified and has its speaker on the bottom of the device.  It comes with a much improved and more sensitive S-Pen with added features giving it even more functionality.  The Note 5 has more flexibility with longer documents, can send live broadcastings of your videos and you have an optional slip-on physical, BlackBerry-style keyboard.  It is running Android Lollipop 5.1.1 and will cost you about $700 outright. 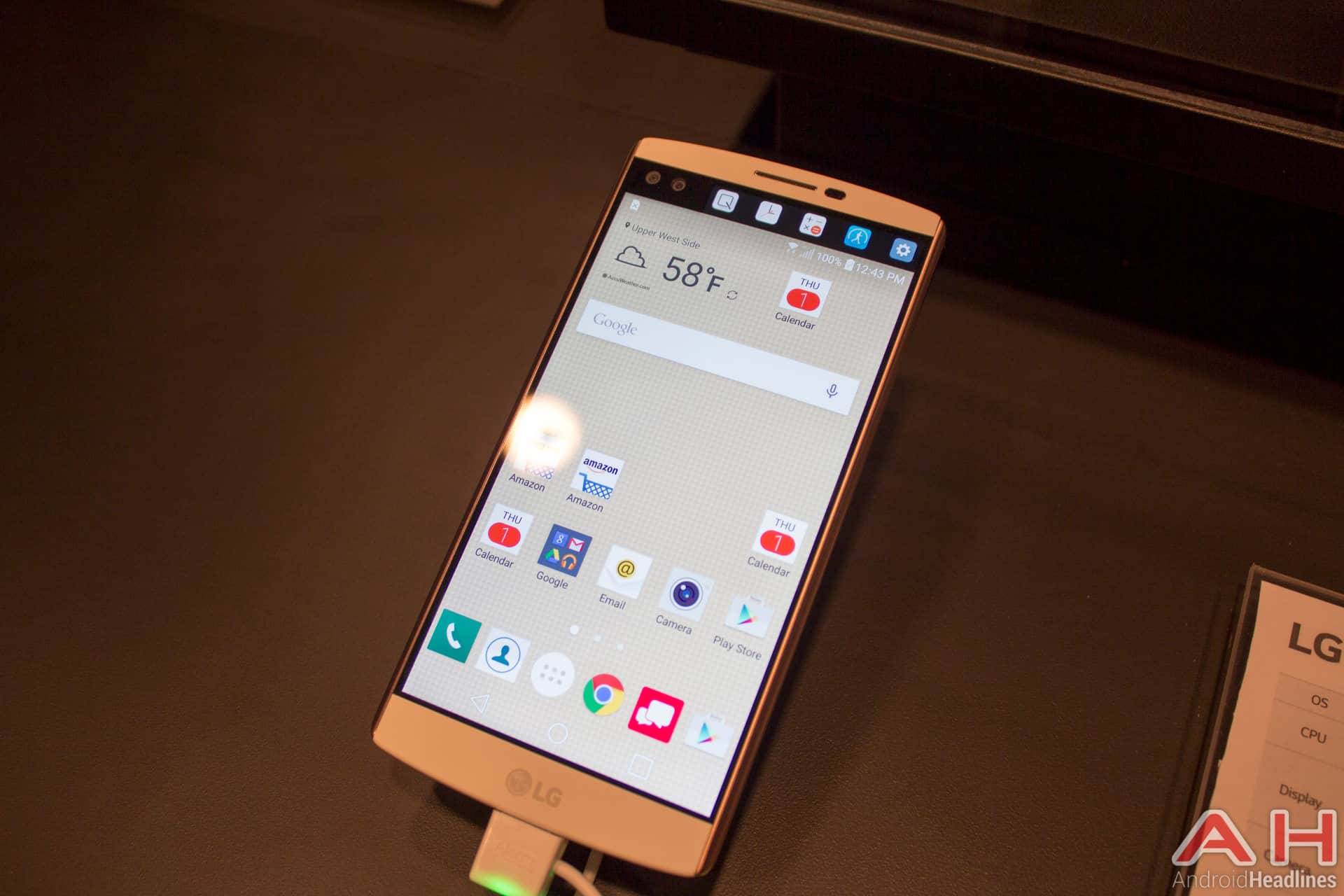 The new LG V10 is an interesting smartphone – first, it is sculptured from stainless steel and silicone, secondly it has two 5MP FFCs, and lastly, it has a small, independent display sitting above the 5.7-inch main display – it can be on even when the main display is off.  How well will the LG V10 perform within this crowded field of premium devices…are customers going to grab it up or past for the regular LG G4, Galaxy S6, Galaxy S6 Edge and S6 Edge+, the new Nexus 6P, Moto X Pure Edition or the Galaxy Note 5?  Let’s take a closer look at the new LG V10 and see just how it stacks up against the phablet that started it all…the Galaxy Note 5.

The LG V10 sports two displays – the main display is a 5.7-inch IPS Quantum QHD with a resolution of 2560 x 1440 pixels and 515 PPI, along with a 1040 x 160 pixel display that ‘sits’ above the main display at the top.  The secondary display can be on while the main display is off – showing notifications, the weather, the time/date, app shortcuts and more.  This goes up against the fantastic 5.7-inch QHD AMOLED display of the Galaxy Note 5.  LG chose the Snapdragon 810 to use in their LG G Flex 2, but have stayed away from it in the LG G4 and in their new LG V10.  They went to the 64-bit Qualcomm Snapdragon 808 hexa-core processor with four cores clocked at 1.44GHz and dual cores clocked at 1.82GHz.  The Note 5 is using their Exynos 7420 octa-core processor clocked at 2.01GHz.  The V10 is packing 4GB of DDR3 RAM versus the Note 5 with 4GB of DDR4 RAM.  The LG V10 has only one option – 64GB of internal memory, but has a microSD card slot to expand another 128GB.  The Galaxy Note 5 gives you two options – 32GB or 64GB – and no means to expand.

The main camera areas should be very competitive if the LG V10 lives up to the LG G4’s camera heritage.  Both devices use a 16MP sensor and the V10 adds laser autofocus, a large f/1.8 aperture, OIS and an LED flash.  The LG V10 uses a dual 5MP FFC to add a wider field and more depth to the traditional selfie or video chat.  The Note 5 has the more traditional single 5MP FFC.  Both devices use a 3000mAh battery – the V10 has a removable battery and the Note 5 is a non-removable battery, although both have a fast charge option, with the Note 5 also enjoying a quick wireless charge option.

Like the Galaxy Note 5, the LG V10 wisely included a fingerprint sensor and NFC that will allow the V10 to make mobile payments and once Android 6.0 Marshmallow is updated on the V10, it will be able to make mobile payments using the fingerprint sensor.  The LG V10 has a speaker on the bottom of the device and includes Hi-Fi circuitry for improved sound through the headphones.  It also has a built-in IR Blaster – something Samsung used to include on their Note series, but removed it this year.  The available colors are Space Black, Luxe White, Modern Beige, Ocean Blue, Opal Blue.  It should be available in October/November on Verizon, AT&T and T-Mobile so far and priced approximately $600+. 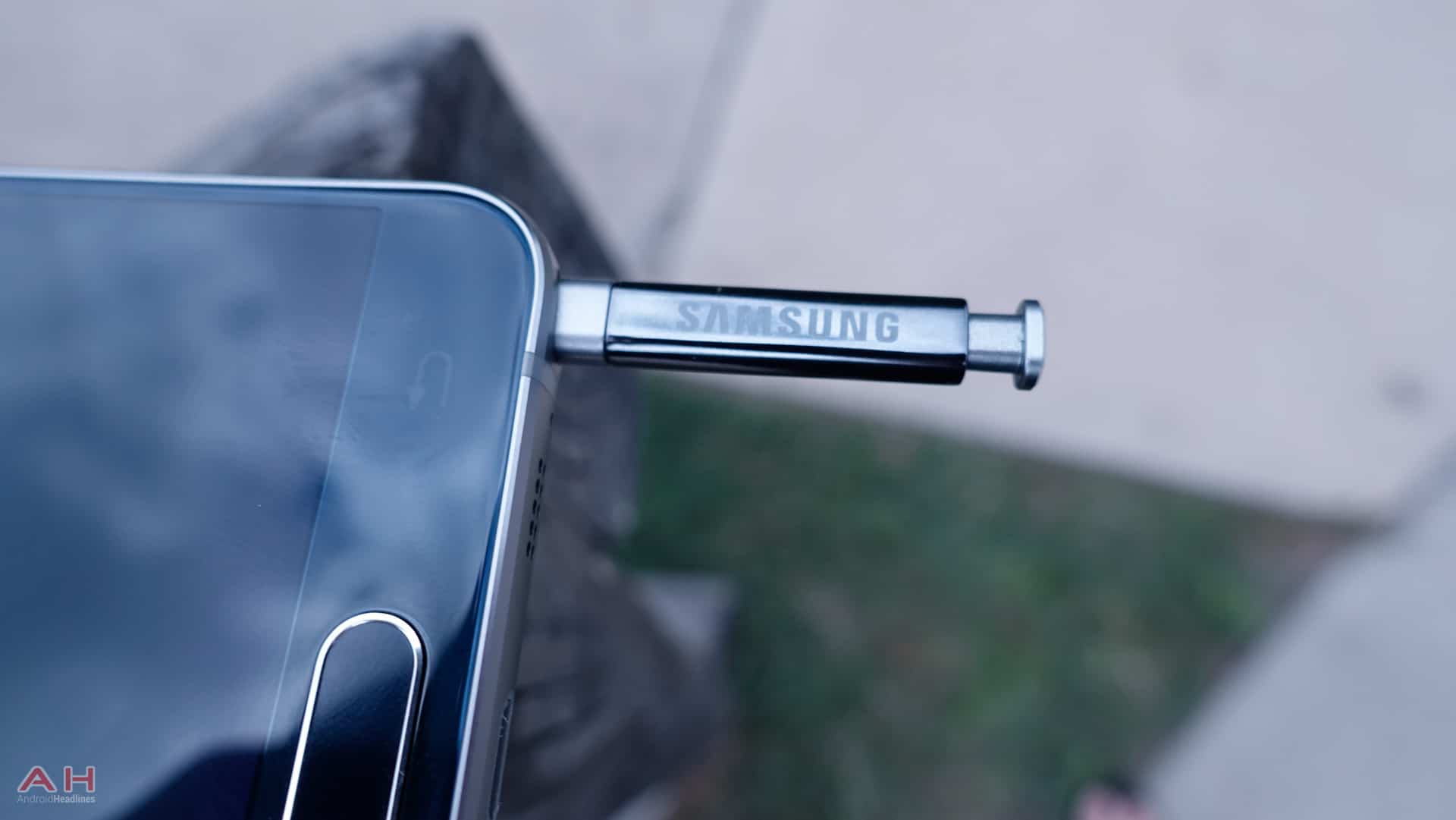 This was really a tough one to pick, as these devices are very close in specifications, but with all things considered, I picked the Samsung Galaxy Note 5 as the winner of this comparison. The Note 5 has a superior Super AMOLED display, a faster processor with 14nm technology, faster RAM and flash memory, equal main camera area, PayPal certified and Samsung Pay fingerprint sensor.  It has a built-in heart and oxygen saturation sensors and has both a quick charge battery and built-in wireless quick charge.  The LG V10 does offer room for additional external memory, has the dual FFC setup and does incorporate a removable battery.

When it comes to leveraging their beautiful displays – the Note 5 sports an S-Pen that utilizes the display for a number of purposes and there are many apps that were developed specifically for the Note 5’s stylus – it really does make the Note 5 stand out from the other phablets, but many users rarely utilize its many capabilities.  LG V10 took a different approach – almost a Galaxy S6 Edge approach – only LG put a separate display at the upper part of the screen for alerts, app shortcuts, weather, etc.  LG claims it is not actually a discrete panel, but simply an extension of the main panel with its own special backlight.  Which display type you would utilize more is something only you can answer.

Specification-wise and the technical edge would definitely go to the Galaxy Note 5 – 14nm processor, DDR4 RAM, UFS2.0 flash memory and quick wireless charging.  But a couple of beloved features are on the LG V10 – expandable memory and removable battery – that are no longer on the Note 5.  If you think you will use the S-Pen and many features the Note 5 offers it is definitely a solid device, but if you cannot live without the removable battery and expandable memory, then the LG V10 is your device.