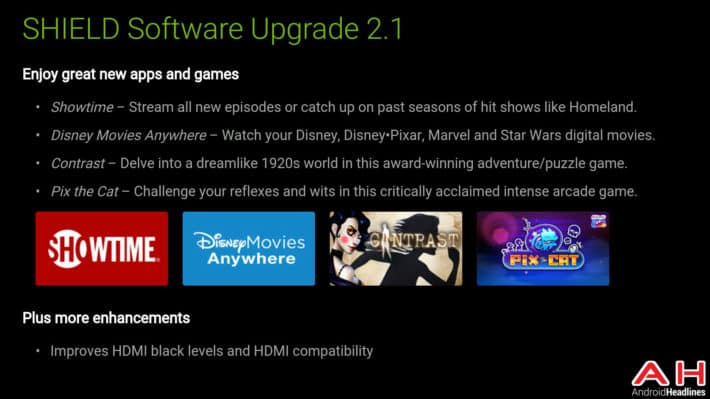 If you are currently the proud owner of an NVIDIA SHIELD then you might have noticed a few updates rolling in for your device. A couple of week ago, NVIDIA announced a massive update which was rolling out to SHIELD devices. The update was coming in the form of version 2.0 and with it, brought a ton of bigger changes than you would normally see in such an update. The biggest of which was the inclusion of the new GeForce NOW subscription service which allows gamers to subscribe to NVIDIA's back catalog of games.

However, it seems that a number of users have been encountering a couple of issues with the update. One which seems to be occuring is a darkened screen which seems to be an effect of the HDMI black levels. If you had noticed this, then the issue now looks to have been fixed based on another update which is now in the process of rolling out to SHIELD devices. The latest update comes in the form of version 2.1 and SHIELD owners are already reporting that the update seems to be fixing the issue.

In addition, the update changelog also lists increased support for a number of SHIELD and Android TV apps and games that have been announced recently. These include the recent Android TV compatibility with the likes of the Showtime and Disney Movies Anywhere apps, as well as support for the very recently released SHIELD compatible games, Contrast and Pix the Cat. For those wondering, these last two games are currently exclusive to SHIELD devices and not available on other Android TV devices. If you haven't seen the update arrive for your device yet, then you should do soon enough as it seems to have begun rolling out last night. As always with these updates, if you do notice any issues, it is always worth reporting them to the NVIDIA forums as it looks like it is that level of feedback which has helped in making sure this update has rolled out so quickly. To report any issues or read the full details of the latest update, you can head over to the NVIDIA forums though the source link below.