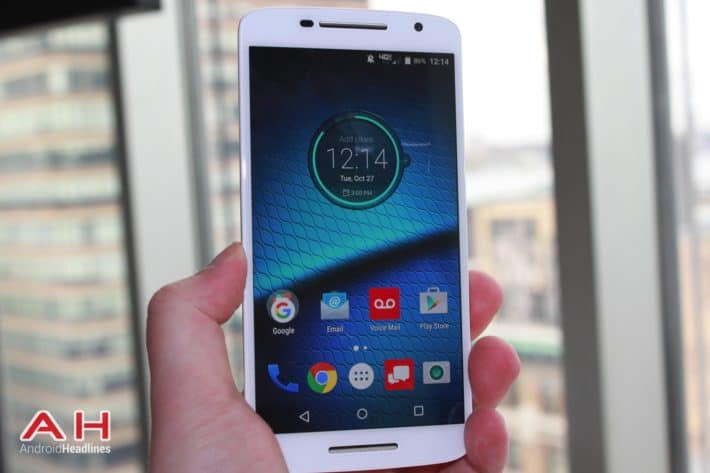 Motorola had a big day on Tuesday, announcing the Droid Turbo 2 and the Droid Maxx 2 with their partner Verizon in New York City. The Droid Turbo 2 is the one that has been getting the majority of the spotlight, as it is their high-end flagship. Additionally, it has a feature that many of us are likely drooling over. And that's the shatter-proof display. Now we had seen that feature leaked and teased plenty, ahead of the announcement. On Tuesday, Motorola boss Rick Osterloh walked on stage with the Droid Turbo 2 and dropped it on a set of bricks on the stage. Not once, but twice. And no damage at all to the display. The company explained how they did this, which is using five layers for the display. And the most interesting part is the flexible AMOLED display, which can absorb the impact.

Now with the Droid Turbo 2 being exclusive to Verizon. That left a number of us wondering, why not bring this to the the Moto X Style/Pure Edition that was announced in July? Motorola VP Jeff Miller told the press that due to the relationship they have with Verizon for the Droid brand (since 2009 with the original Droid), it was important to continue innovating the Droid brand. He also said that the Droid brand represents durability and strength. Which is what ShatterShield is, really. Miller also stated, "We'll consider it overtime how we might apply the technology to our other devices – but for now, we think Droid smartphones are the most practical place for it."

In the future, we could see ShatterShield make its way to the Moto X or other products from Motorola. But as of right now, it appears to be exclusive to Verizon and to the Droid Turbo 2. The Droid Turbo 2 is going on sale on Thursday, October 29th in all 1600 Verizon locations across the US, as well as at VerizonWireless.com. It'll cost you $26 per month for the 32GB version on Verizon's EDGE plan (remember, no more contracts), or $624 at full retail price. Verizon has also worked with Motorola to bring Moto Maker to the Droid Turbo 2, so you'll get virtually unlimited customization in the look of your Droid Turbo 2, in addition to that shatter proof display.