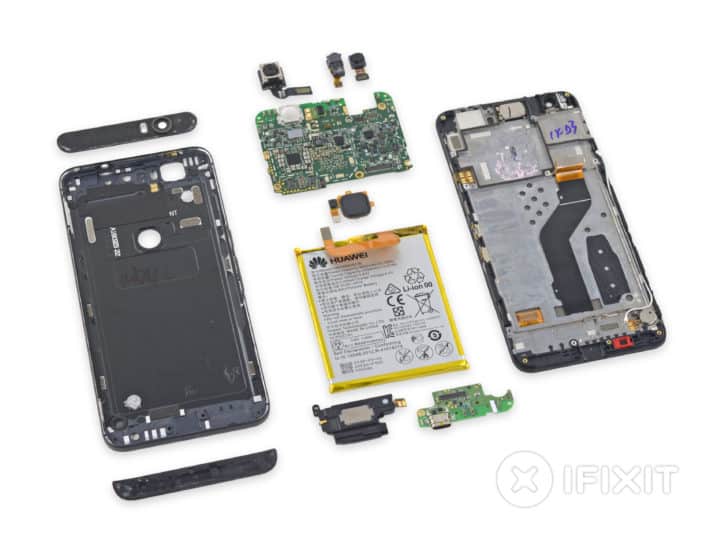 On Thursday, iFixit posted their teardown of Google’s latest flagship device, the Nexus 6P. iFixit determined that the device would actually be pretty tough to repair actually, and thus giving it a 2 out of 10 for repairability. So if anything goes wrong, you’re better off sending it off to Huawei/Google to get it repaired than to do it yourself. Of course, that’s not all an iFixit teardown is good for.

iFixit also shows us everything that’s behind that camera hump on the Nexus 6P. Which we find the camera, flash, laser auto-focus as well as other things like the WiFi, Bluetooth, NFC and more underneath that hump. iFixit also states that the glass for the hump is made of easily shattered, glass. And also adds that removing it won’t be fun. Taking off the back cover, the battery is easily accessible. However there is a cable running from the motherboard (that sits near the top of the phone) and the daughterboard (that sits below the battery), that is in the way. iFixit confirms that this is indeed a 3450mAh battery inside the Nexus 6P. They say it’s a “monster” and is also fiercely glued into place in the Nexus 6P.

In the teardown, iFixit did notice that the headphone jack was encased in a rubber sleeve. Seeming to point towards the Nexus 6P possibly being water-resistant. Although that’s not the case, Google could be experimenting with that for future Nexus devices. Which would be a great idea. Every phone should be water resistant. iFixit also found that the fingerprint reader on the back of the Nexus 6P is much different from what we have on the Nexus 5X. And in fact, it’s a square fingerprint reader and not a circle like the cut out on the back of the device.

For the complete teardown, and all of the specifics, including the Samsung flash storage used in the Nexus 6P, be sure to check out iFixit’s teardown which will be linked down below. The Nexus 6P begun shipping out to those that pre-ordered earlier this week. While 128GB pre-orders will have to wait a bit longer. Additionally, you can buy the Nexus 6P from both the Google Store and Huawei.