Chrome OS has been around for a long time now, and some people would say that it hasn’t evolved to the point it should have. Google has envisioned this OS as internet only operating system, and even though it gained quite a few offline features, it’s still pretty much an interent OS, if we can call it that. I personally use a Chromebook for a long time now, and it’s quite limited in some ways, but in other ways it’s truly great, it all depends on who’s using it and what that person wants to use it for. Chromebook sales have been right where Google expected them to be, and it seems like the company has no issues as far as that is concerned.

That being said, a report surfaced yesterday, stating that Chrome OS might get absorbed by Android in 2017. The report has also stated that we might see first editions of the merged OS next year. This, of course, managed to create a lot of interesting questions and conversations all over the internet. Well, we do have some new info on the matter, even though it’s not exactly a direct clarification or anything of the sort, read on.

Google’s VP of Engineering, Hiroshi Lockheimer, said the following on Twitter yesterday: ”There’s a ton of momentum for Chromebooks and we are very committed to Chrome OS. I just bought two for my kids for schoolwork!” Now, this was posted yesterday, and considering the timing, it might have something to do with the report which surfaced yesterday as well. If Mr. Lockheimer is to be believed, Chrome OS as a unit isn’t going anywhere. This, of course, is not a direct confirmation, or clarification of any sort, but it’s at least something. There’s always a chance that Google will merge the two OS’ at some point, in which case we might get some unification between Google’s mobile and desktop software, not that they’re not communicating with each at the moment, but it would be far more pronounced if Google opts to merge the two. This sure is interesting, and it remains to be seen what is Google’s next step here. 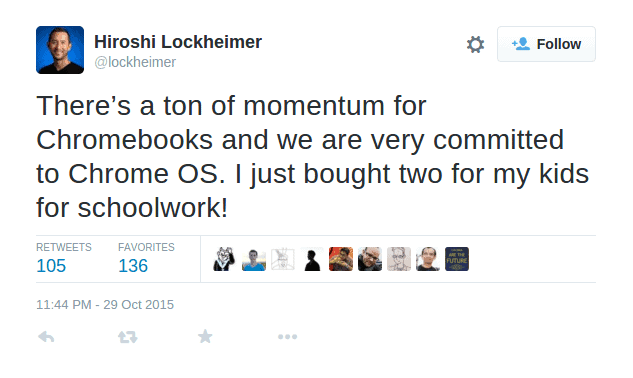