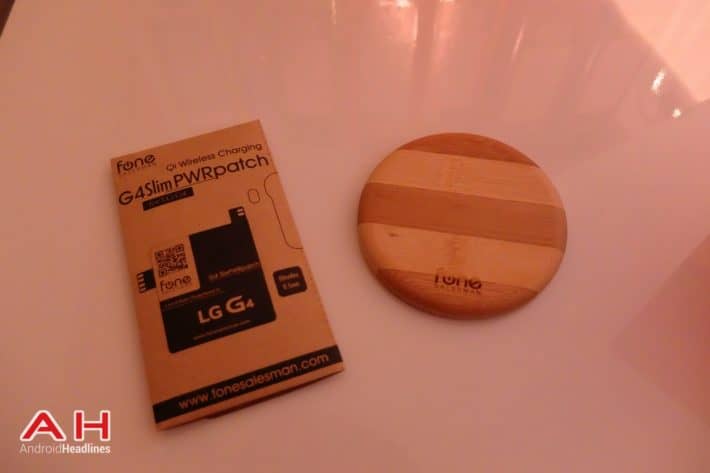 When it comes to wireless charging it seems that nobody can quite get it right. The Qi standard has been the dominant one for some time now and yet the majority of smartphone manufacturers still don't ship with support built-in. Samsung has turned over a new leaf with the Galaxy S6 line and they all ship with wireless charging built-in, but for older Samsung devices and the likes of LG, some modification is required. So today, we're reviewing two products from FoneSalesman (which actually has nothing to do with actually selling phones), a Limited Edition version of the Bamboo WoodPuck Qi Charger and the G4 SlimPWRpatch which converts a G4 to being able to charge over Qi wireless charging. The SlimPWRpatch is available for other phones as well, so this review could stand as an example for other models.

Starting with the SlimPWRpatch, it's all packaged in a neat cardboard sleeve, with some easy-to-follow instructions. Caution: this will void your warranty if you're using the original cover that came with your device, and so this shouldn't be taken on by just anyone. In fact, taking off the sticker off the G4's battery cover was less than ideal if I'm honest, and the included guitar pick wasn't much help. However, this is more due to LG's stickiness than anything else. Long story short, you'll be taking the back cover of your G4 from this: 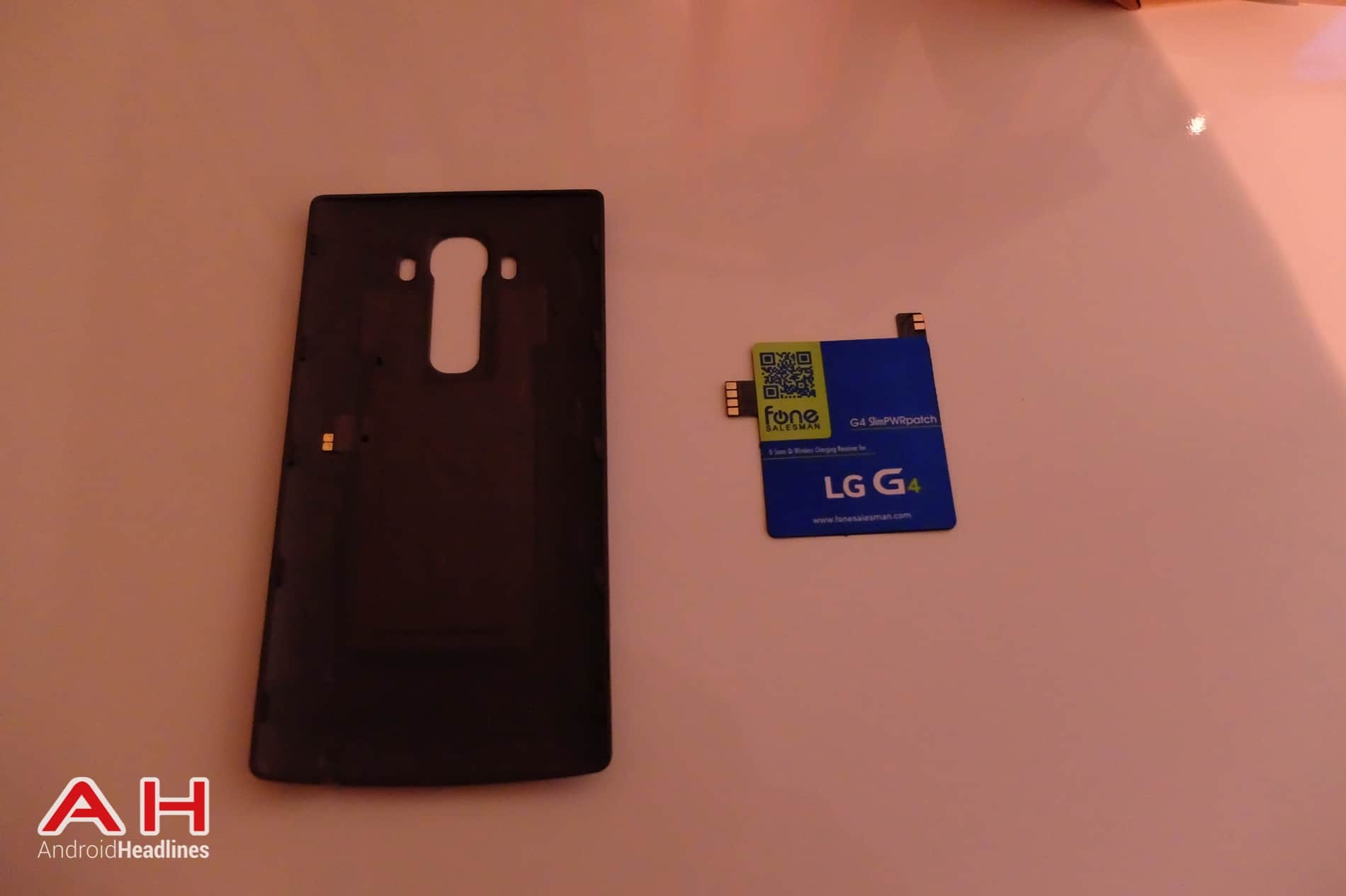 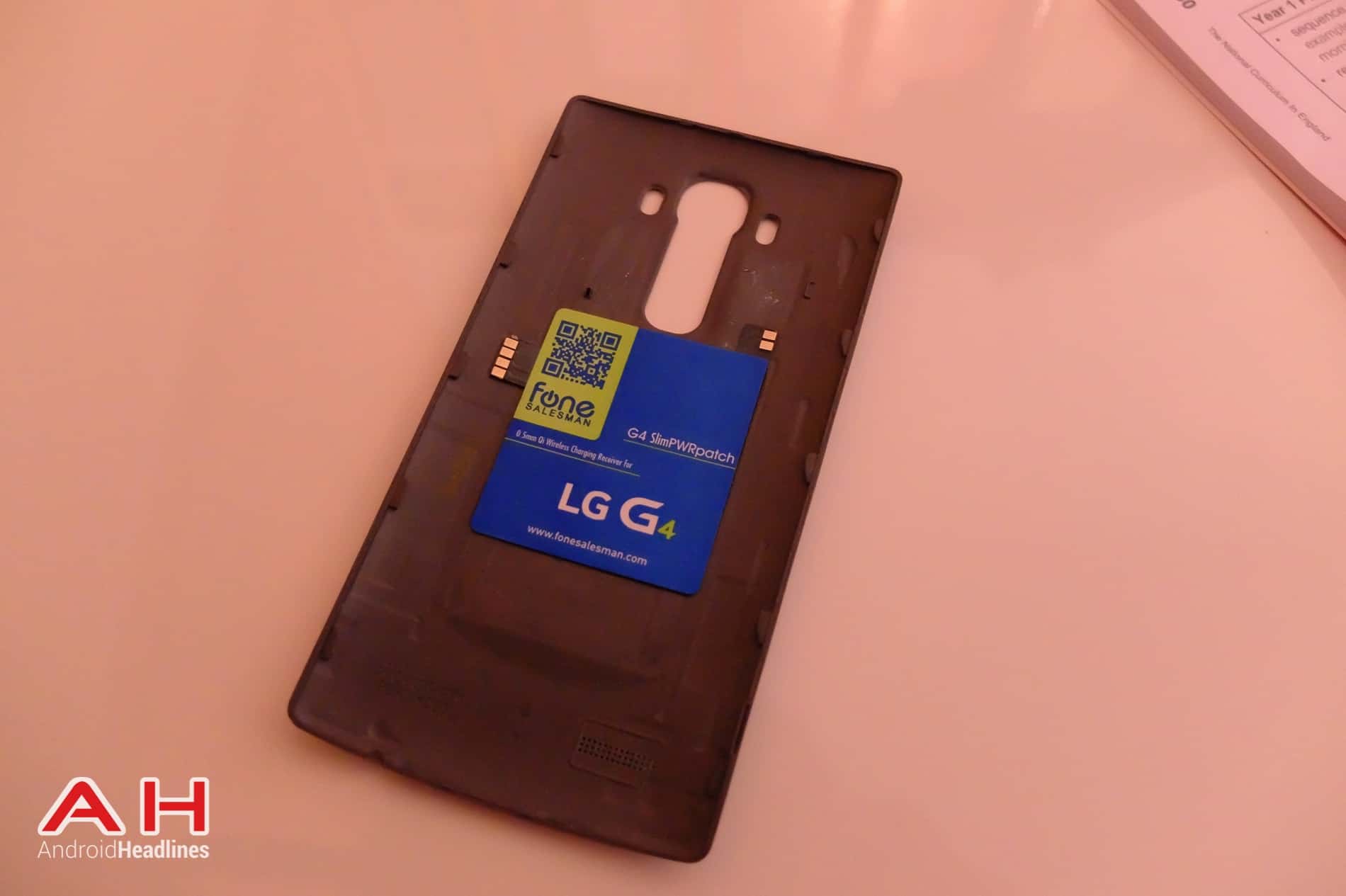 It took me around five minutes to do this, and this was only because I didn't use the pick tool properly. When all is said and done, you have an LG G4 that can charge over Qi charging. While the PRWpatch is fairly slim, it will make putting the back of the G4 on a little more difficult, but I'm willing to bet that this is as slim as they were willing to make it. It's not something I would recommend to the average user, but anyone with an interest in this sort of thing isn't going to be too difficult, and I'd say that this was only a little more difficult than putting on a screen protector sans air bubbles.

On to the WoodPuck, and while we've reviewed one of these before, this is one of the Limited Editions that FoneSalesman is currently selling. it's a nice contrast between light and dark, and it does look very nice on no matter which service you choose to rest it on. They even supply you with a brown USB cable to complete the look, along with dust covers for microUSB ports in both black and white. A complete package this certainly is, and the WoodPuck can be used with any phone that works with Qi charging.

There are no pesky LEDs here, just a subtle – if not high-pitched – beep to let you know that your device is charging. Overall, I'm pretty impressed with both products, and while the SlimPWRpatch is available for a lot of other devices, including older smartphones, I wouldn't recommend this to everyone. Those willing to take a little initiative into their own hands however will do just fine, and get a much better-looking and convenient solution for charging a smartphone overnight.