When Google launched the original Chromecast two years ago they revolutionized the media streamer, creating a cheaper, better alternative that was open to development much like Android is.  Now Google is attempting to do the same for the audio streaming market, and it's doing it in a way that we don't normally see.  Up until now we've pretty much only seen Bluetooth media streamers to keep those older speakers going with the new wave of tech, but there are some significant disadvantages with using Bluetooth for audio streaming in this situation.  First of all is the battery drain, as your phone has to literally stay connected and constantly send and receive data to this dongle.  Second of course is the fact that Bluetooth range is 30ft on a good day, and that's not including being behind those pesky walls in your house.  Now Google is positioning it's Chromecast as the perfect solution to this problem, but one that's audio only instead of video like the regular Chromecast would.  Let's take a look at how this works and whether or not it is actually the solution you want. 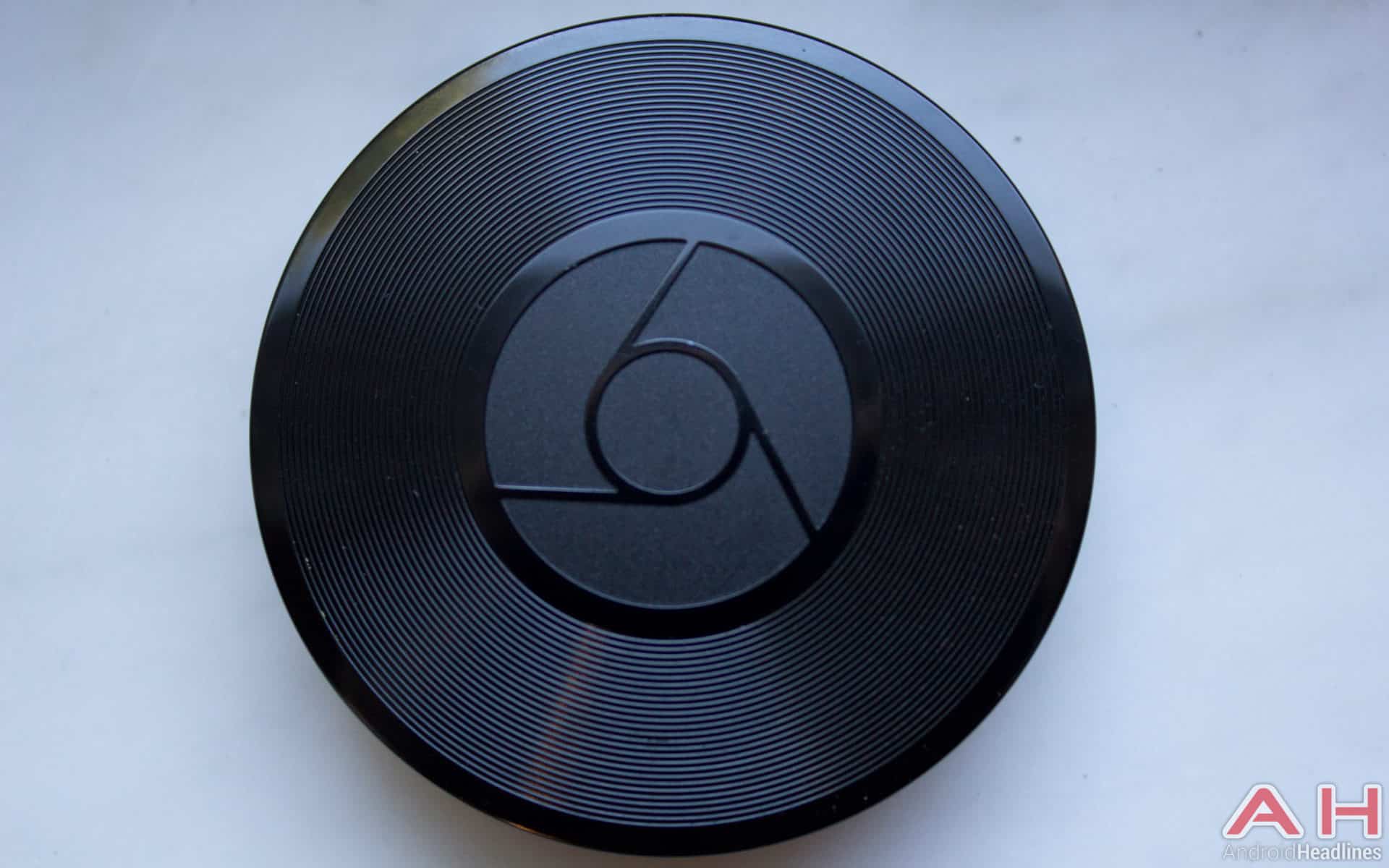 The Chromecast Audio is really a brilliant and beautiful device, which quite honestly is a bit of a shame given that it's probably never going to be seen once installed.  Google's 2015 Chromecast design follows the same language here; a pretty simple looking puck with the exception of the top portion, which features circular ribs just like a record has.  Google's marketing material highlights this by obvious design by using the included 3.5mm cable to look like the needle on a record player.  It's obvious right from the get-go that this is an audio-focused product, and that's the genius of the design.  On the side of the puck is a microUSB port for charging, with a single reset button and status LED right next to it.  On the opposite side from these ports sits a dual 3.5mm headset jack and optical audio jack in one.

Since Google only ships the device with the microUSB cable and 3.5mm cable you'll need to buy additional cables if you want to get it working with other ports.  The list of included supported plugs include a 3.5mm to RCA cable, as well as a Mini-TOSLINK-to-TOSLINK cable for optical audio.  This means you should pretty much be able to plug the Chromecast Audio into any old speaker system lying around, and that's entirely the point.  The puck is small and can be hidden anywhere or prominently placed if you want to display Google's excellent design.  Don't forget too that you'll need to power the unit with a USB to microUSB cable, which is included in the box along with a wall charger.  The Chromecast Audio will also need powered speakers to function, so if you're using standalone speakers you'll need to hook the Chromecast Audio up through an amp. 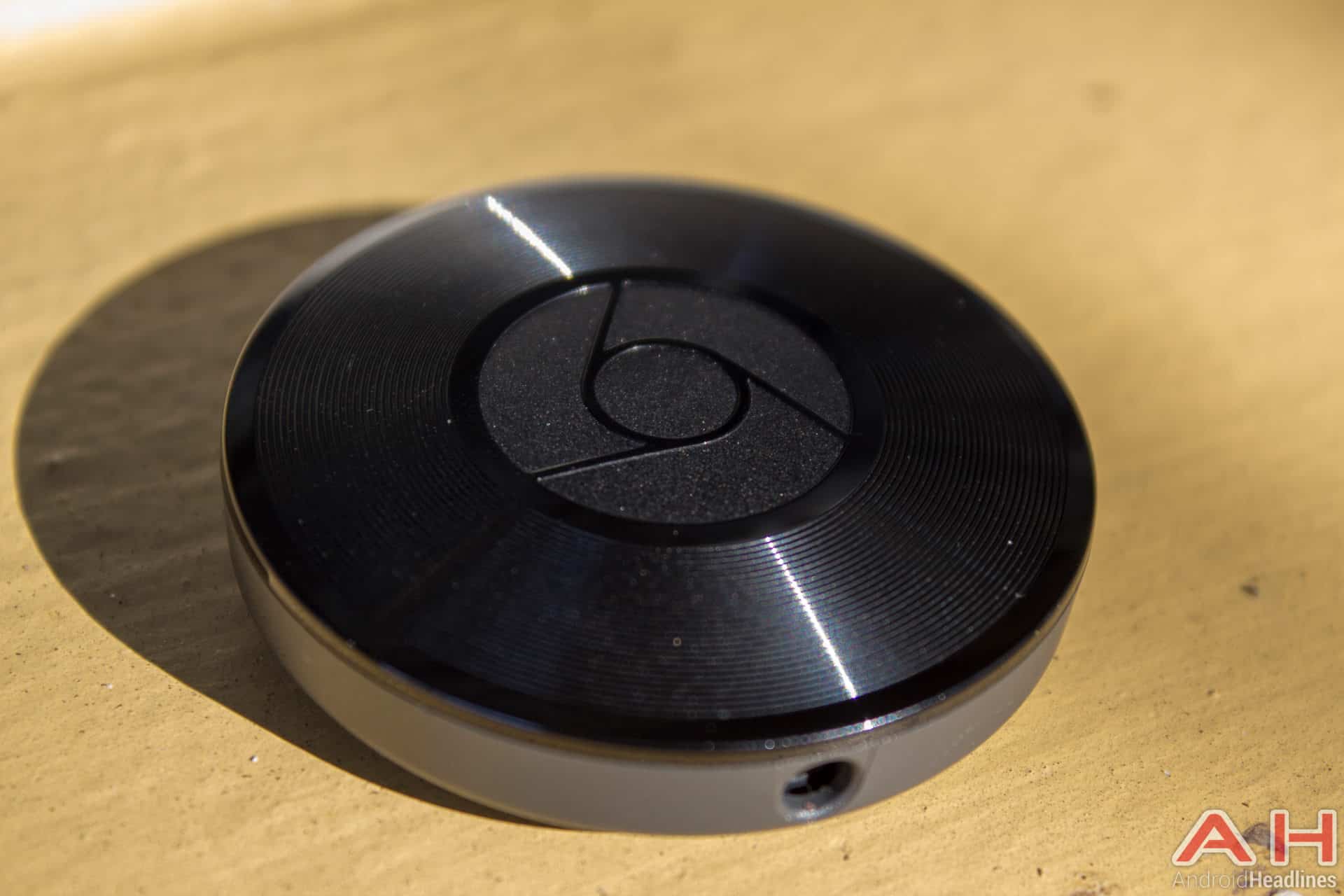 The near lack of configuration needed to setup the Chromecast Audio is astounding.  Google's Chromecast app, found on the Google Play Store and Apple Appstore is your companion for getting this set up, and it's mostly comprised of hitting next a few times in addition to entering your WiFi information.  Giving the Chromecast Audio a specific name during this setup is the key to identifying it when connecting, or telling it apart from other Chromecasts in the area since they're all connected via the same way.  The Chromecast Audio does need WiFi access to operate, so this isn't intended to be a portable solution.

The Chromecast app is the same one you'll use for a regular Chromecast, and it works to give you recommendations on content as well as apps to use for casting your audio.  Since this is an audio-only product you won't be able to cast videos to it in order to just listen to the audio.  This is a shame given YouTube's vast music library (and others of course), but it's a restriction for now as the Cast button doesn't even show up in the YouTube or other video apps.  In apps like Pandora, Spotify, Google Play Music and other audio-only apps this button is displayed in the normal section and works exactly like the regular Chromecast would.  The differentiation here is that there's a little speaker next to the name denoting that this is a Chromecast Audio rather than a regular Chromecast.  Clicking on the cast button sends the information to your Chromecast audio and it gives an audible tone denoting that it's connected.

Volume control works just like it would on your phone except that a Chromecast volume bar comes up rather than a media volume bar.  This is because the audio isn't playing from your phone at all, an important feature of the product that helps keep your battery lasting longer and enables things like continuous streaming even when answering the phone, as well as party mode.  In a party stream everyone that wants to choose music can open the same app and connect to the Chromecast Audio.  By doing this the Chromecast tells everyone's app what song is currently playing as well as the rest of the playlist, and depending on the app in question's capabilities different people can do whatever they want with the audio.

Google Play Music, for instance, lets you move around the order or insert any song into the playlist you'd like, meaning everyone connected can add their favorite music in the queue without messing everyone else up.  Since there's no pairing required and guest mode can be enabled to let anyone control the action, this is the easiest way to get your music going in a group setting. This feature appears to not be enabled yet, or at least I couldn't find any apps compatible with it.  Regardless though Google showed this off live at their event in San Francisco a few weeks ago and it's definitely a feature that works quite well when it's available.

Audio quality delivered from the Chromecast is incredible and is much higher quality than Bluetooth streaming would be.  Since there's no compression needed to deliver the nonexisting stream from your phone or tablet, the Chromecast Audio can play back the highest quality audio your designated music app delivers.  If you're a higher quality audio buff and want to use something like Tidal to stream you certainly can without worrying about lossy audio quality.  High Dynamic Range audio is enabled by default when an optical connector is used, or can be enabled via the settings area in the Chromecast app.  Again this delivers high quality audio to proper sound systems to deliver sound quality you can never get over a lossy format like Bluetooth.

Audio can also be cast by using the Cast button on your Chrome browser from any computer.  This enables you to control the Chromecast audio without needing a mobile device; a function that's certainly going to have more limited scenarios than your mobile device allows but is a fantastic addition to the feature set.  Since the audio from the tab is cast you'll use your favorite player's controls for moving between songs, controlling volume and whatever else you normally do.  The same limitations apply here that apply to mobile devices, so no casting YouTube or other videos for now, just audio sources. 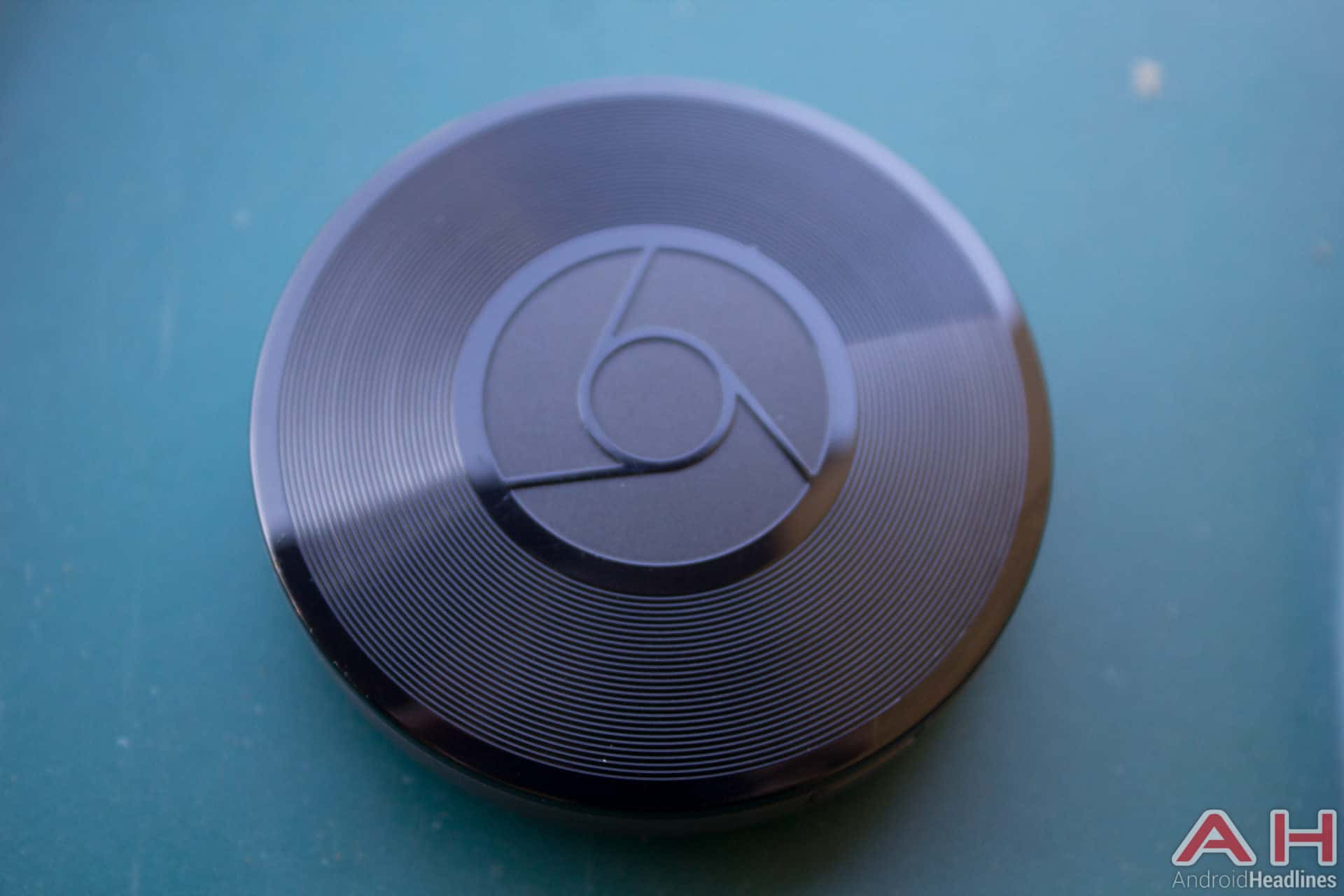 $35 buys a Chromecast Audio and brings any older audio system back to life.  It's also convenient for all those Bluetooth speakers you might have lying around that might work better as a stationary speaker instead of a mobile one.  Since it saves significant battery life over using Bluetooth for audio and provides significantly higher quality audio, it's the ideal solution for audio lovers everywhere.  Since it needs a WiFi connection it's not intended for use on the go unless you want to be really creative with your connectivity solutions.  The Chromecast Audio is an absolutely brilliantly designed device that works exactly like that Chromecast you've had for a while now does, except just for your music.  This is an absolutely must-buy product for anyone looking to smarten up their existing audio system or to just provide a way for multiple people to control the audio on a speaker system with their own individual devices.  Check out the Google Store to get one of your own!