Two years ago Google revolutionized the streaming media game. While there were other media streaming devices on the market they often costs well over $100 and occupied space on your shelf, cluttering up the space on top of all those other boxes you’ve likely got hooked up to your TV.  Then the Chromecast came, a $35 device that was only a little bit larger than the HDMI port that it plugged into, and along the months after released garnered millions of sales, praise from critics and customers alike, and the list of compatible Google Cast apps grew exponentially.  The Chromecast wasn’t without problems though, and while it’s hard to complain about a device that’s a fraction of the cost of competitor’s devices there have been plenty of lower priced solutions launched by the likes of Amazon et al. since then.  Does this latest release still capture our hearts and minds, or is Google’s latest update just a patch while we find something else?  Let’s take a look! 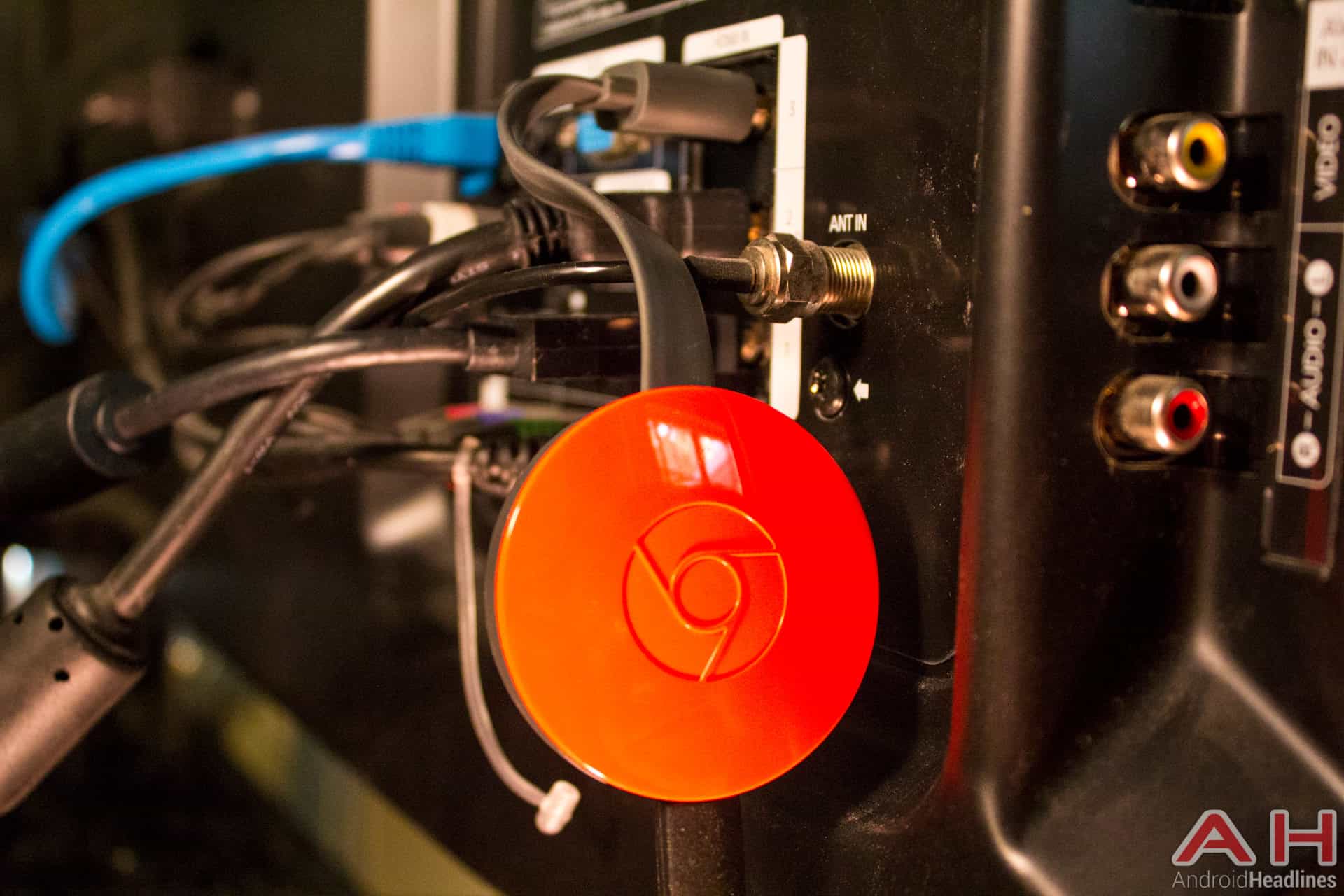 The first generation Chromecast had a very unique look, one that sort of looked like the HDMI port had been extended and fattened a bit.  This time around Google is keeping with the unique look theme but not keeping the old design.  That result is something that looks completely different from last time and feels more like the Chromecast Audio was the base design since both are a pretty nondescript puck.  The top of the Chromecast features a shiny plastic in one of three colors, ours was a sort of neon salmon (listed as Coral), and both yellow (listed as Lemonade) and black models are also available.  Google’s decision to go with some more fun colors also reflects in the actual design of the unit itself, which appears to be designed to be toted places rather than found in the back of your TV forever.  This is reinforced by the new HDMI cable that sticks about 4 inches outside of the puck-shaped body of the Chromecast and helps keep the physical unit out of the way of all those other HDMI plugs on your TV.

If you’ve ever tried to plug an old Chromecast into a TV with lots of other things plugged in you’ll know it was either a tight fit or just plain impossible to get in the first place.  This solves that issue but looks slightly awkward hanging there, but in all honesty you’re probably not going to be seeing it all that often since it’s behind most TVs anyway.  The HDMI cable is even magnetic and attaches to the body of the Chromecast, creating a loop that makes carrying the device around very convenient.  A single reset button and LED status light are found on the side right next to the microUSB port.  There’s still the power cable that needs to be plugged in, and while Google ships the Chromecast with a USB to microUSB cable and a wall charger, your TV might have enough juice to power the device by itself.  My TV was able to power on the unit with no problem but streaming wasn’t possible as the WiFi radios didn’t seem to get enough power from my 2011 TV’s USB ports. The biggest advantage of this new design isn’t even in the way it gets out of the way of other cables, rather the redesigned internal components.  The round shape allows Google to place three WiFi antennas inside of the unit, all evenly spaced apart from eachother.  This spacing and placement is used to actively select the best WiFi antenna to use based on the signal, something that’s done completely in hardware and doesn’t require any user input at all.  Upgraded WiFi antennas also mean a better signal, with support for 802.11ac as well as 5GHz signal for more reliable communication.  Anyone who’s used a Chromecast previously knows that it isn’t always the most reliable device, and Google blames much of that on the old antenna design.  Unfortunately new antennas don’t mean new display support, so the Chromecast 2015 still only supports up to a 1080p signal, not 4K like some other streaming competitors have. 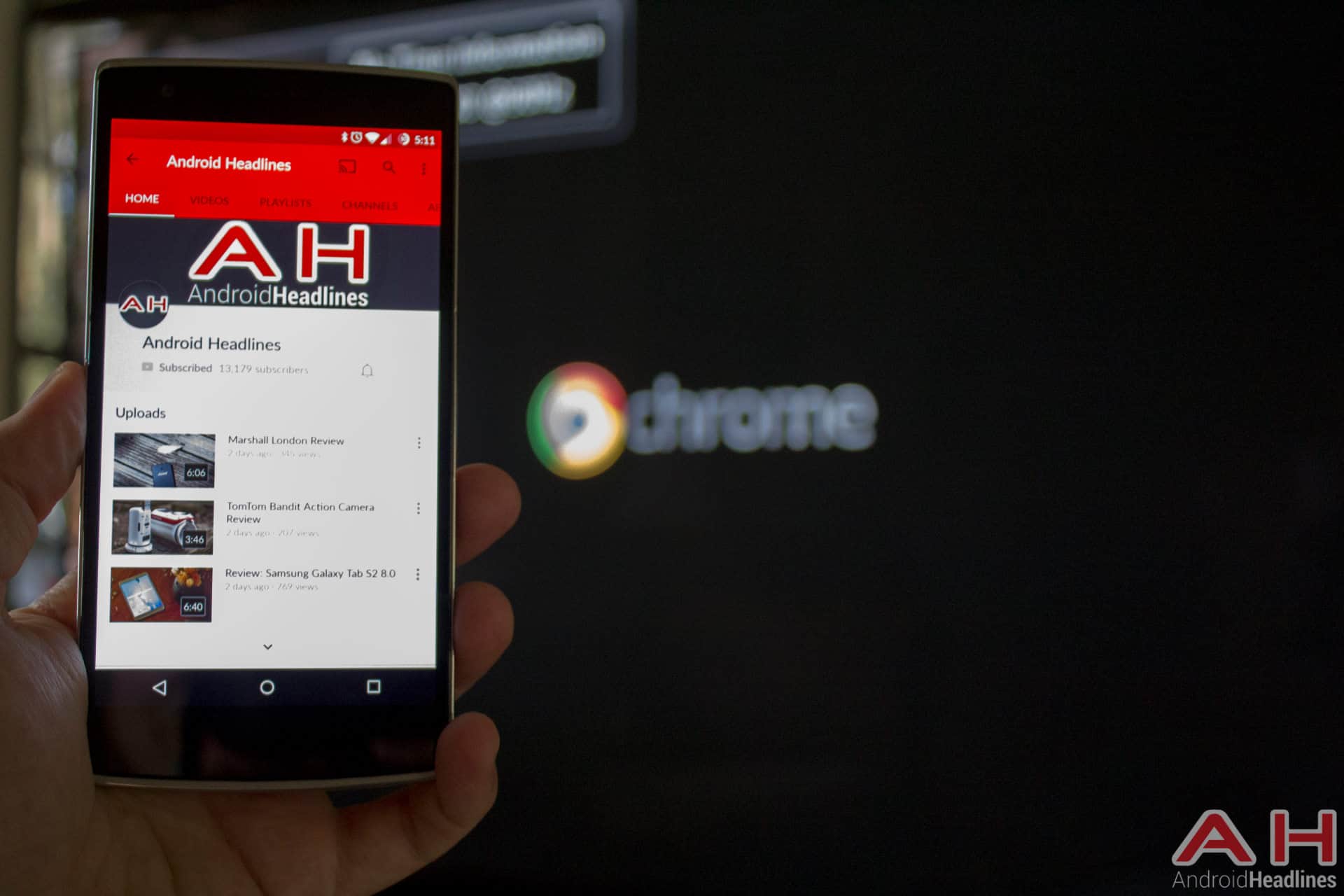 This new speedier casting is part of a number of different solutions that Google has built into the Chromecast.  First up is the processing, which has reportedly seen a bump and should be able to work with your media a little better this time around.  Secondly is the aforementioned triple-antenna solution, and lastly is a brand new software solution that developers can implement into their apps.  When a supported app is launched on your phone or tablet it quickly looks for Chromecasts on your network and automatically sends its app data to the unit for quick streaming.  The result is that by the time you’ve chosen the video or audio you’re planning on consuming, the Chromecast is already ready to stream it.  Upon clicking the cast button and selecting your nearby Chromecast the unit immediately pops up your media on screen and begins streaming.  This has reduced starting time from 10-20 seconds all the way down to 1-3 seconds for streaming media.  Again an app has to support this new feature but it’ll likely get added in the next few months to most popular Chromecast apps.

Local media streaming is still terrible though, and I found that I couldn’t stream even the simplest of videos from my phone to the Chromecast.  This appears to be some sort of hardware limitation with the Chromecast itself, as casting anything above a certain quality (read: 720p or higher at an average bitrate) either didn’t start at all or encountered significant buffering time while watching it.  This results in only online media being Castable, which is still an unfortunate limitation of the unit.  Casting a tab from Chrome on your computer is still as limited too, giving maybe a 15FPS output, leaving those who want to watch Amazon or other videos out of the realm of doing so.  This was the thing I personally wanted to see changed the most on the new Chromecast and it didn’t change at all, a massive disappointment for me.  At least mirroring the screen from your Android-powered phone or tablet is near flawless though, and features both screen rotation as well as the full framerate of your device (usually 60FPS). 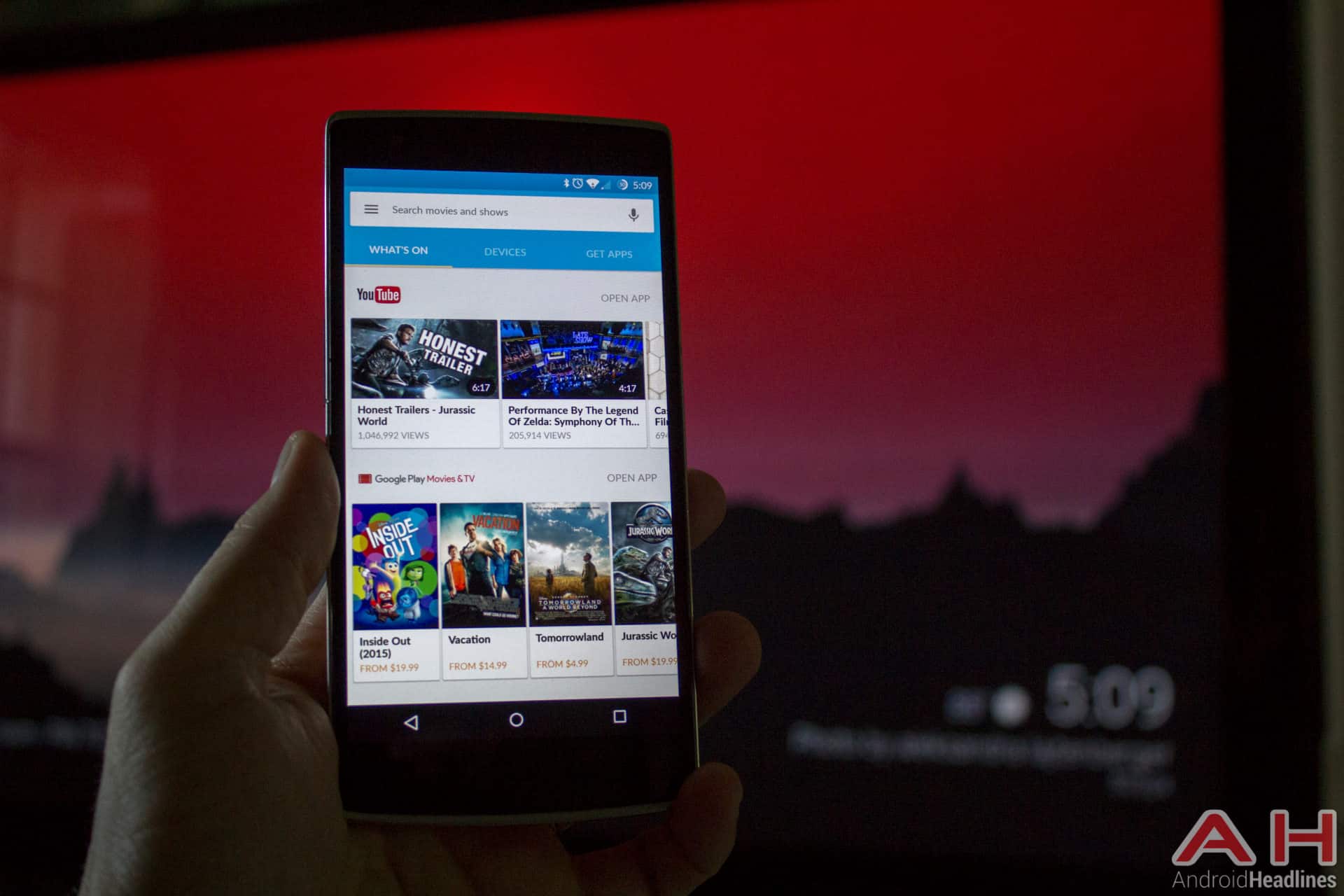 The Chromecast app has received a significant overhaul as we’ve covered, and none of this functionality is specific to the new model of Chromecast.  That’s an automatic upgrade of sorts to existing Chromecast users as it supports the new preloading of apps as well as giving you a slew of new features to help you find new media to cast.  Setup of the Chromecast is as easy as pie and literally includes a few dialog boxes to click next-next-next on, occasionally inputting some information such as name of your Chromecast and your local WiFi access information. This new app has a brand new section that curates information from Chromecast compatible apps you already have installed.  This works sort of like Google Now cards in that they take information from a supporting app and give them to you in the Chromecast app’s interface.  Just like Google Now tries to be a one-stop shop for all your information needs, the Chromecast app is designed to be a one-stop shop for all your entertainment needs.  Google Play Movies and Music are on there giving recommendations, Netflix, YouTube, Spotify, etc. are all there too.  In addition to that there’s a tab up top that shows all of your Chromecast devices in a clear and easy to find section, as well as a third tab for recommending apps that are compatible with Chromecast. 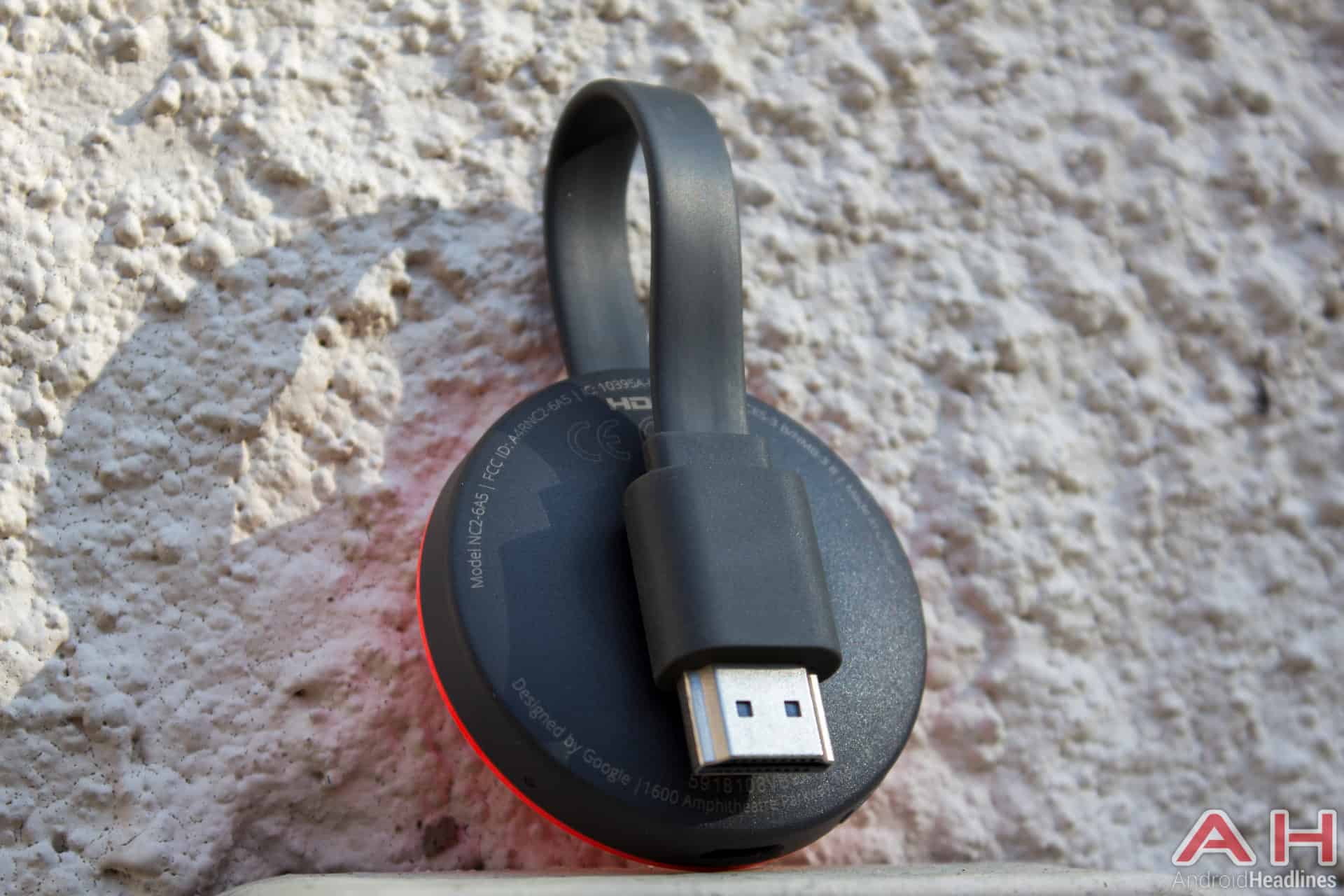 Google has introduced some new programming APIs to help push the Chromecast beyond the quiz game-show type of game that’s on current generation of Chromecast to actual real-time game streaming using a dual-screen feature found on consoles like Nintendo’s WiiU.  While this feature isn’t available in full force just yet Google promises the first round of games are to be delivered by this Holiday season, with games like Angry Birds Go using your TV more like a console so that you can properly enjoy them.  While mobile gaming has exploded its still limited by the screen size and inputs you have with your smartphone, but Google is positioning the $35 Chromecast to compete directly with more expensive home consoles for home users.  Afterall it’s already got the media streaming portion pinned down, now it’s working on the games.

Google showed off Angry Birds Go at the event in San Francisco when they announced the new Chromecast, and it played absolutely flawlessly.  There was zero input lag and the visuals looked clean and excellent on the TV, sort of like you would expect an HD Playstation 2 to look like.  Games promise to bring more console-quality visuals as your smartphone or tablet’s horsepower allows of course, and since the Chromecast only decodes the video portion of the experience the detail and framerate is wholly limited by the actual device you’re using.  This is all thanks to the new horsepower and antenna configuration in the 2015 Chromecast, and it’s exciting to see where this will take Google’s streaming device in 2016 when the feature will most certainly take off. 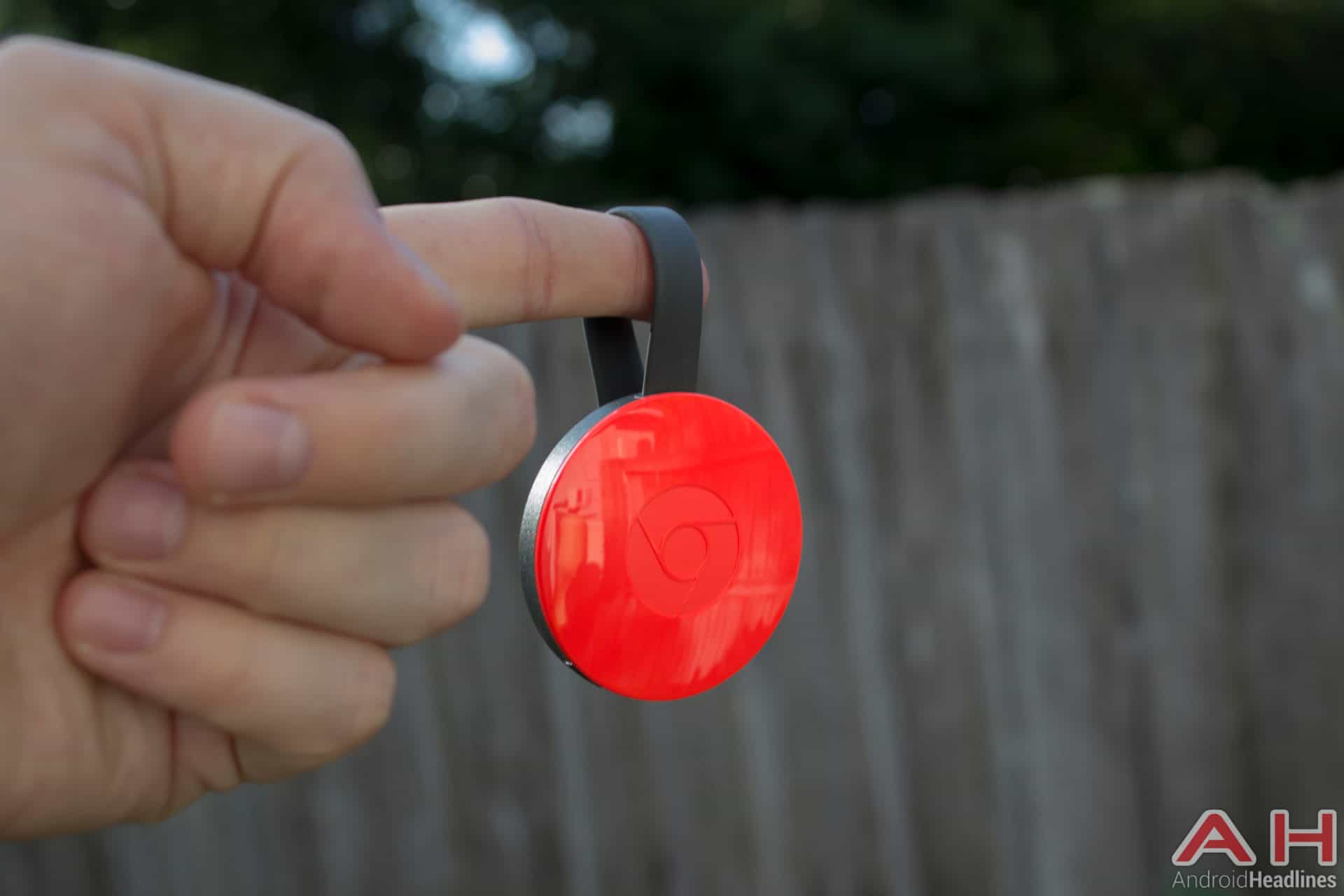 Google’s latest release into the media streaming market is a real winner.  For $35 you’re getting an incredibly well designed piece of hardware that looks cool and functions even better.  The new antenna system works incredibly well and delivers a faster, more reliable connection than the first generation Chromecast could.  The processing power has been upgraded but the video output hasn’t, so it’s still limited to 1080p output instead of being upped to 4k as many had speculated.  Regardless of this though the new signal strength inprovements and the promise of Chromecast gaming mean this is a worthy successor to the original model, but it’s probably not enough of a bump to replace it for current Chromecast owners unless you’re really having problems.  Those looking for less congested 5GHz support will also benefit from the new support added in this device over the original, likely delivering faster and more reliable WiFi over the standard 2.5GHz wireless signals of yore.

Local media streaming is still fairly useless and you’ll find that casting videos stored on local devices rather than ones on the Internet just doesn’t work very well.  That said $35 is still an incredible value for such a device and it wouldn’t hurt to buy an additional one for another TV or to just lug around with you for convenience.  Maybe Google will release a more premium Chromecast with more horsepower and 4K compatibility in the future, but for now Google can get away with a lot of shortcomings simply because of the price.  Check out the Google Store here to get your own!