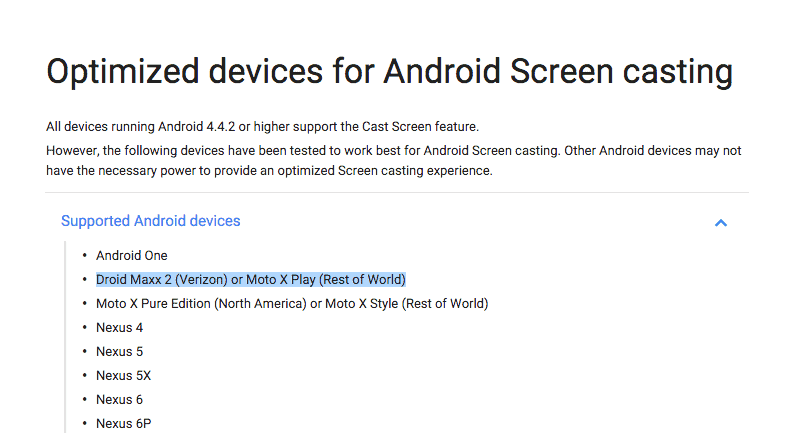 We've heard a few rumors of an upcoming Droid or two, for Verizon made by Motorola. One of those has been named the Droid Maxx 2. We've seen it pop up a few times and now it has just popped up again. This time in support documentation for the new Chromecast which is available on Google's site now.

There have been rumors floating around that Verizon and Motorola will announce a new Droid smartphone (or two, there's a rumor for a Droid Turbo 2 as well) at the end of this month. The October 29th date continues to pop up. Which would put it right in line with last year's event for the new Droid Turbo. The Droid Maxx 2 is likely going to be a rather mid-range device with the same large battery as we've come to expect from Droid smartphones recently. As well as the Droid Turbo 2 being the higher-end model. This way Verizon will have a Droid at a few different price points, and hopefully selling more Droids.

The Droid brand has basically been Verizon and Motorola's baby since the original Droid was made in 2009. For many, that was the first smartphone they ever had, including myself. And it really helped put Android on the map, followed by the start of Samsung's Galaxy S series. Now 6 years later, the Droid brand is still quite popular, and the Droid Turbo was one of the best Droid branded smartphones ever made by this partnership. In fact, it is still one of the best smartphones on the market, even a year later.