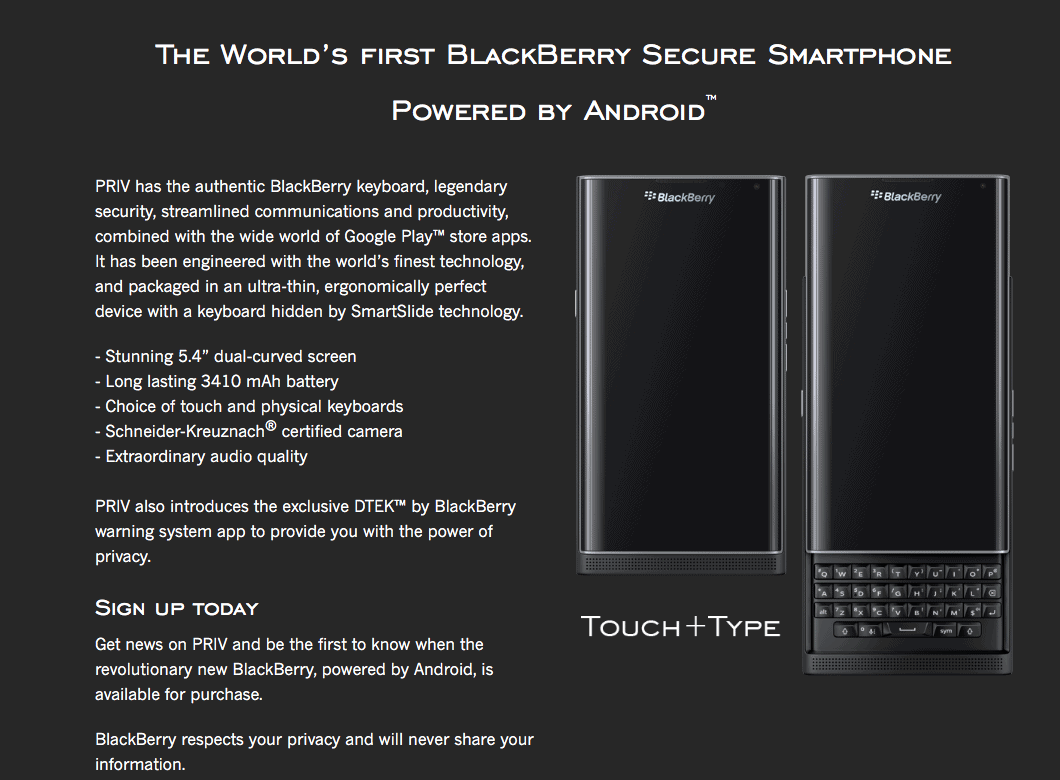 Throughout much of the Summer, the rumor mill was awash with the news that BlackBerry was working on an Android-powered smartphone, finally admitting that their own software just didn’t have enough on offer for the modern user. Well, not too long ago, BlackBerry came clean and opened up a pre-registration site for the PRIV and let much of the cat out of the bag. If that weren’t enough, UK retailer Carphone Warehouse has jumped the gun and posted a hands-on video of the new PRIV to YouTube. It also appears as though the retailer will be the only place to get the new BlackBerry in the UK as well.

The video in question is only a minute or so long, and doesn’t go into all that much detail, but it does give us a good idea of what the PRIV is. The 5.4-inch display appears to have some Galaxy S6-inspired edges at either side and it’s a whopping Quad HD resolution. When the keyboard is flicked up however, it does look a little top-heavy, but said keyboard also doubles as a trackpad for swipes and presumably some sort of gesture input as well. The build of Android appears to be Android 5.1.1 with little to no modification outside of a new onscreen keyboard and the DTEK Security Suite from BlackBerry. To a lot of users, the fact that they’ve steered clear of messing around with Android will be great news, and while the form factor does look a little odd, there’s no other Android device that offers a physical keyboard like this, so the Canadian firm might ironically have stumbled into a gap in the market.

Set to launch officially any time now the PRIV could be BlackBerry’s final shot at success in the mobile market, but time will tell whether or not the included physical keyboard and BlackBerry security will take off. Hopefully, we’ll be able to bring you more as soon as we get our hands on, but for now you can live vicariously through Carphone Warehouse’s short video below.