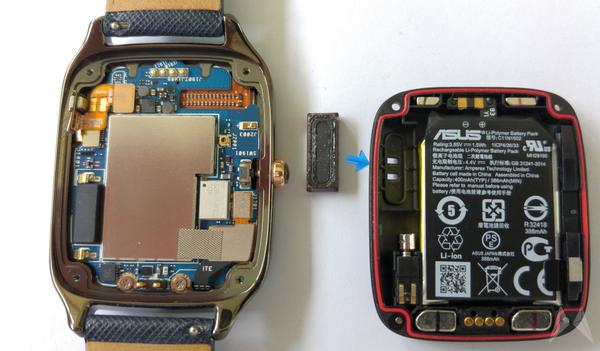 Newer components have made possible for smartphones to get extremely thin and light, plus they fit into even smaller devices like smartwatches. Still, in order to achieve smaller sizes, designers and engineers wouldn't include unnecessary components. That seemed to be the case with the Huawei Watch, which apparently included a small speaker even if it is not advertised or listed in the specs. Needless to say that there is no way to use the speaker, if users want to play audio files from their smartwatch, they need to pair it with a Bluetooth headset. This is actually a limitation of the Android Wear platform, as it doesn't support speakers.

Now, a speaker has been discovered inside another smartwatch running Android Wear. It is the Asus ZenWatch 2, which has been available since the beginning of the month through the Google Store. There is a possibility that Android Wear could get support to play sounds through speakers in a future with a new update, which could be another way to get notifications or maybe play additional sounds of some multimedia content. Some users would like it if Google Now responded to them as it does on smartphones. If this were the case, it raises the question if some of the newer smartwatches that use this platform also integrate speakers, perhaps OEMs know about the future update and they are including them to make them last a little longer.

Android Wear has been updated a couple of times enabling hardware that wasn't used before, such as Wi-Fi connectivity, also, the platform doesn't currently support LTE connections but the LG Watch Urbane 2 has already been announced with this connectivity, so an update seems imminent. The user that noticed the speaker on the teardown image of the ZenWatch 2 claims that the second-generation Moto 360 doesn't have a speaker, although this can't be confirmed at the moment. According to the update cycle of Android Wear, there could be a new update before the year ends so maybe it will enable LTE and speaker support with compatible devices, so we would know exactly which of the smartwatches integrate a speaker and some of its uses.