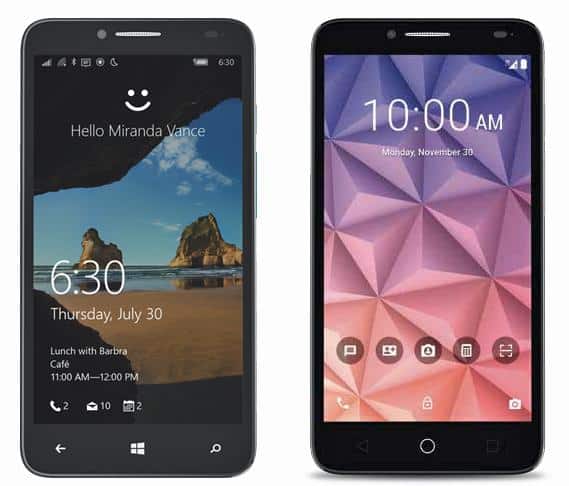 Leaker extraordinaire Evan Blass, best known as @evleaks as per his Twitter handle, has come up with news about yet another smartphone, which, according to him, will come in two different avatars. The device in question is the Alcatel OneTouch Fierce XL, which will apparently not only have an Android version, but also a Windows 10 Mobile variant, if a recent post by Mr. Blass is anything to go by. He also claims that both versions will be hitting T-Mobile at some stage during the latter part of this year. While different versions of the same phone is a bit of a rarity, it has been known to happen before, with manufacturers like HTC launching Android and Windows versions of its One M8 smartphone. In the image above, the Android version of the phone can be seen on the right, as is evident from the capacitive buttons on the bottom of the phones.

Coming to some of the rumored hardware details of the Alcatel OneTouch Fierce XL, the device itself will seemingly be an entry-level smartphone, although, it will feature a fairly large 5.5-inch display panel. Currently, rumors about the hardware specs of only the Windows version are out in public domain, but while details about the Android version are sketchy, it is likely that the Windows and Android versions will sport very similar, if not entirely identical hardware. So without any further ado, let's take a look at the rest of the hardware elements which are said to grace the upcoming device from the erstwhile French brand, which has now been taken over by TCL of China.

As mentioned already, the display on the device will be a 5.5-inch panel, and will have a resolution of 1280 x 720 pixels. The handset is said to be powered by Qualcomm's entry-level Snapdragon 210 SoC, and will have 2 GB of RAM and 16 GB of built-in storage, with support for a microSD card. The battery on the phone is said to be a 2,500 mAh unit. As for the cameras, the primary camera on the back of the phone will come with an 8-megapixel sensor, while the front-facing selfie-cam will be of the 2-megapixel variety, if earlier leaks about the device are to be believed. The device will also include support for VoLTE (Voice-over-LTE), but then again, that only holds true for the Windows version for now, and that too, only according to unconfirmed rumors. There's no reason however, to believe that the Android version will lack any of the features mentioned above, but one will have to wait to find out for sure how that turns out.