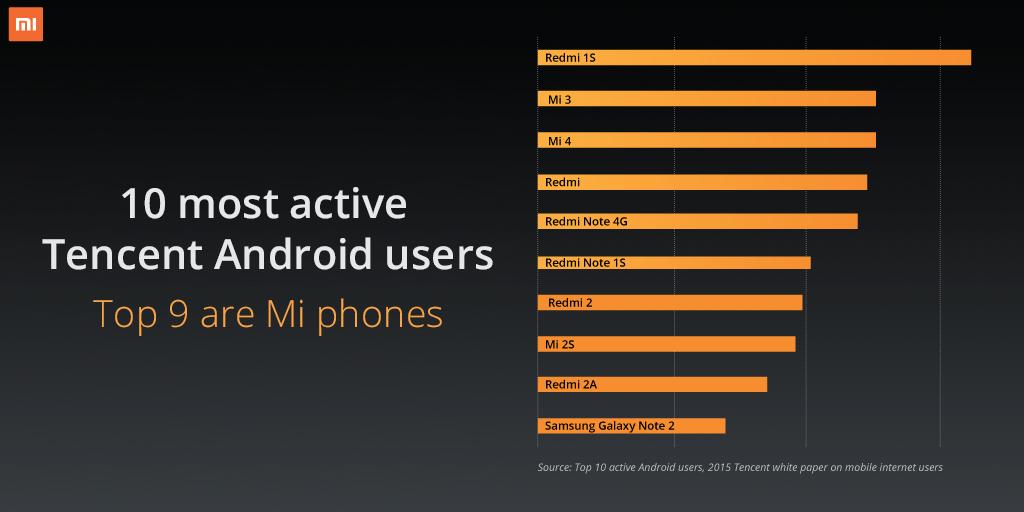 The smartphone and mobile market in China is a lot different to it is here in the West, and that's not just down to the different players that dominate said market, but also down to the different services that they use. Many of the big Western social media sites are blocked by the Great Firewall, and so homegrown networks are naturally the biggest draws. Tencent, a sort of equivalent to Twitter and other microblogging sites, is one of the more popular options in China, and on its Western equivalent, Twitter, Hugo Barra had some interesting stats to share. The ex-Googler, now Vice President of Xiaomi's International operations has shared the statistic that 9 out of the top 10 Android devices that use Tencent are all Xiaomi smartphones.

This is a pretty big deal for Xiaomi, and not only shows that they're selling a lot of devices, but people are using them. The Redmi 1S takes the crown in the Top 10 most active devices by a big margin, which is no doubt down to how cheap the device is. Even so, the Mi 3 and Mi 4, more expensive flagship-level devices from the Chinese firm are right at the top as well. Meanwhile, the only other device, a Samsung, to make into the list was the Galaxy Note 2, a device that was expensive when it launched and is now 3 years old. This just goes to show that cheaper, more affordable devices are the way to win the Chinese market, but more than that they need to offer value and good features. Considering how many Xiaomi smartphones are in this Top 10 list, it would seem that their users are very happy, indeed.

Xioami's growth has been discussed at great length here in the West, but the company has yet to move further than India. Even so, India has become an important market for them and their entry has made a big splash in the emerging market. When Xiaomi does arrive in the US and Europe, it wouldn't be surprising to see them hit with patent lawsuits from big, bad Apple but it'll definitely cause Samsung and other Android stalwarts to pull up their socks.