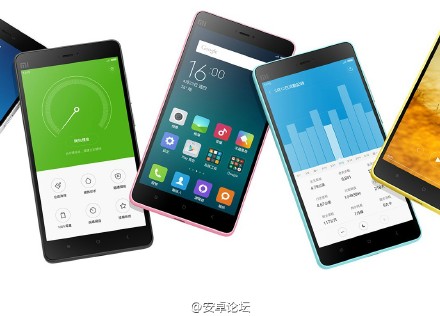 Xiaomi Mi 4C leaks and rumors have been really frequent lately. The company has also confirmed several aspects of this device, like the fact that you'll be able to plug in both Type-C USB 3.0 and MicroUSB cables into the device, and the recent certification listing revealed some quick charging details as well. Previous leaks suggested that this device will be powered by the Snapdragon 808 SoC, along with some other spec info which we'll talk about in a second. Let's first take a look at the newest leak which surfaced in China, shall we.

If you take a look at the gallery down below you'll be able to see a number of leaked Mi 4C images, as well as the packaging of Xiaomi's upcoming device. Judging by these images, the Mi 4C will look very similar to the Xiaomi Mi 4i, as expected. This smartphone will essentially be a more powerful variant of the Mi 4i, and it will apparently also be available in a number of color options. Keep in mind that the company will manufacture only 100,000 Xiaomi Mi 4C, so this will essentially be a limited edition handset.

The Xiaomi Mi 4C is said to sport a 5-inch 1080p (1920 x 1080) display along with 2/3GB of RAM and 16/32GB/64GB of internal storage. Previous info suggests that Xiaomi intends to release three variants of this smartphone. The first variant is said to sport 16GB of in-built storage and 2GB of RAM, the second model will sport 3GB of RAM and 32GB of internal storage, and the most expensive one 3GB of RAM and 64GB of native storage. The middle of the road variant is said to cost around $235, which means these handsets will cost between $200-300. The 13-megapixel camera will probably be located on the back of the Xiaomi Mi 4C, and a 5-megapixel snapper will be available up front. The 3,080mAh battery will also be a part of this package, and Android 5.1.1 Lollipop will come pre-installed here with Xiaomi's MIUI 7 OS installed on top of Google's OS. That's more or less it, the company will probably unveil this phone on September 22nd, so stay tuned.