According to a new report, the Verizon edition of HTC’s 2014 flagship, the One M8, seems to be getting a software update from the carrier to fix the Stagefright vulnerability. According to a screenshot sent in by a reader, the update being rolled out this Wednesday comes with the build number HTC6525LVW_4.17.605.9-4.17.605.5_R4. There’s no word on any officially available changelogs though, so there’s no telling whether the update brings along any new features or major bug fixes, but it seems like an unlikely proposition at the moment. As for the incoming update, while Sprint had already rolled out the Stagefright patch to its One M8 back in mid-August, Verizon seems to have taken almost a month longer to do the same.

Coming to the Stagefright security hole, the vulnerability in Android’s Stagefright multimedia library was originally discovered by Zimperium zLabs researcher Joshua Drake, who reported it to Google as far back as April, before making it public in late July. While Google patched things up at its end, carriers and manufacturers have thus far struggled to get things up and running at their ends, leading to the delayed rolling outs of patches, leaving millions of devices across the globe vulnerable to attacks. Unpatched devices running Android 2.2 Froyo and above are said to be susceptible to the exploit, as Stagefright has been Android’s multimedia library from that particular version of the operating system.

The update will be available OTA, and is expected to be rolled out in batches, as is customary. So it might take a bit of time reaching every user. Owners of the HTC One M8 will be able to check if the update is available for their device by going over to Settings > System > About Device, and then tapping on Software Updates > Check for Updates. The Verizon One M8 is expected to stay on Android 5.0 Lollipop after this patch is applied, so no new features or even major bug fixes are expected as part of this patch, as already mentioned above, although a few minor ones may well be par for the course. The smartphone of course, has already been confirmed to get the Android 6.0 Marshmallow update at some stage in the future. 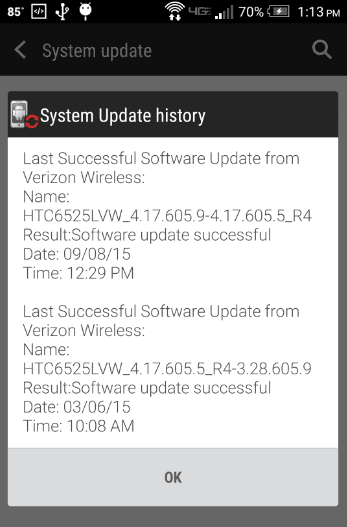