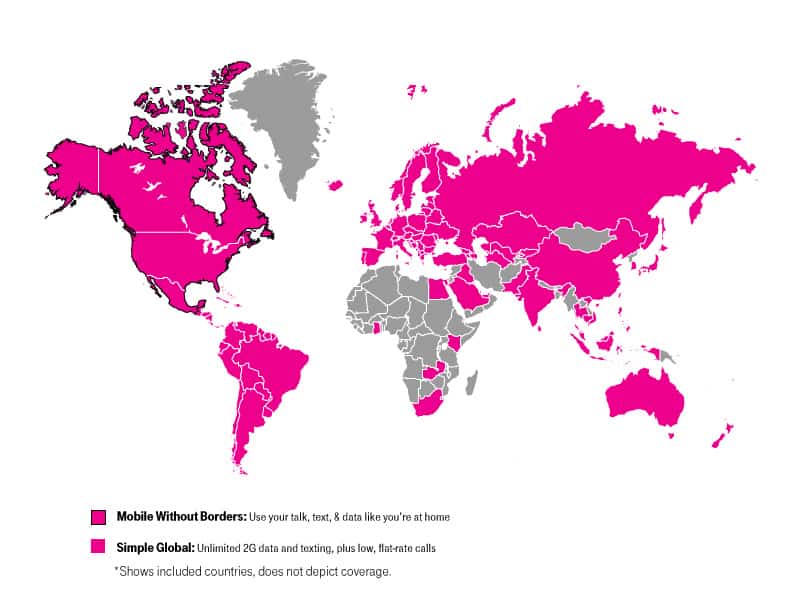 With Uncarrier 3.0, T-Mobile announced Simple Global. This was an attempt to get rid of the traveling pain point that users often have. If you've ever traveled internationally and tried to use your smartphone, you'll know exactly what I'm talking about. You either get hit with massive roaming fees, or have to pick up a local SIM, which in some countries, it can be tough, if you don't already live there. This is why Simple Global is such a great perk for T-Mobile customers. Plane lands, turn on your phone and you can use data at no extra cost. Sure it's slower, but that's better than getting charged per megabyte. T-Mobile does also offer high-speed data packs as well.

Today, the nation's third largest carrier announced some enhancements to Simple Global. With the addition of 20 more countries. Which means you can now fly anywhere in Europe and in South America and use your phone at no extra cost. This brings the total number of countries for Simple Global up to 145. For the most part, the entire world is covered, except for Africa, a few countries in Asia and the middle east. Not bad at all. You can check out the source link below for the entire list of the countries that are part of Simple Global.

"We've just made your traveling even easier in 20 more destinations around the world, expanding Simple Global to cover all of Europe and all of South America," said John Legere, president and CEO of T-Mobile.

With Simple Global you get unlimited data, however that data is capped at 128Kbps. As we mentioned above, you can buy data packs at 100MB, 200MB and 500MB. Calls are going to cost you twenty-cents per minute. Although if you do calls over WiFi, like Google Voice users do, that won't be charged, as you're using data or WiFi.

Without a doubt, the biggest headache for wireless customers is the roaming fees. Especially for those that travel often. And for T-Mobile to pretty much get rid of that headache is a big deal. Sprint has since followed in their footsteps, but they don't offer unlimited data in as many countries. At least not yet. Hopefully other carriers will follow suite.