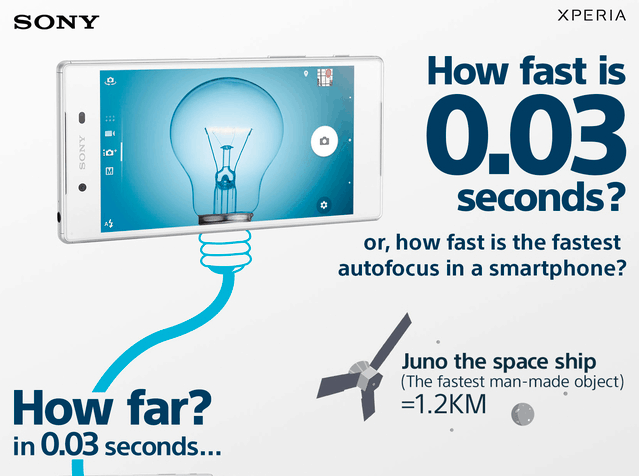 This week, Sony announced not one, but three new smartphones at IFA in Berlin. We got the Xperia Z5 and Z5 Compact, which we were expecting. But we also got the Xperia Z5 Premium which features a 4K display. Yes, Sony skipped QHD and went straight for 4K. But that's not all we got out of Sony this week. We finally got a new camera on their smartphones. The first new sensor since the Xperia Z1. This time we have a 25MP camera on the backside of the Xperia Z5. Sony is also touting the auto-focus speed of the new sensor, which is said to be as fast as 0.03 seconds. In fact, the company has released a new infographic touting the feature, which you can see at the bottom of this post.

In this new infographic, Sony compares the time it takes the Xperia Z5 to auto-focus, compared to a variety of other things. For example, 1462 Google searches are performed in 0.03 seconds. Or 572 tweets in that same amount of time, that's a lot of tweets. It's a pretty interesting infographic to say the least. And a good way for Sony to promote their Xperia Z5.

Currently, we know that the Xperia Z5 family will be coming to Europe, but as far as North America goes, no announcements have been made. And in fact, T-Mobile – who has carried the Xperia Z, Xperia Z1s and Xperia Z3 in the past few years – have decided not to carry the Xperia Z5. Which is unfortunate, as it looks like the other US carriers aren't looking to pick it up either. Hopefully we'll hear something about it coming to the US or Canada in the near future though.

With the Xperia Z5, we are looking at a 5.2-inch 1080p display, a Qualcomm Snapdragon 810 processor, 3GB of RAM, 32GB of storage and a microSD card slot. Sony have also included a 2900mAh battery inside which the company says it will last you 2 full days, like previous Xperia Z flagships have. Not to mention the camera, which was already fantastic on Sony smartphones, it's gotten even better. While Sony lists it as 23MP, it's technically a 25MP sensor. Let's check out the auto-focus speed though. That's where the magic is, and without lasers.

Advertisement
Advertisement
Trusted By Millions
Independent, Expert Android News You Can Trust, Since 2010
Publishing More Android Than Anyone Else
37
Today
134
This Week
135
This Month
4900
This Year
106376
All Time
Advertisement