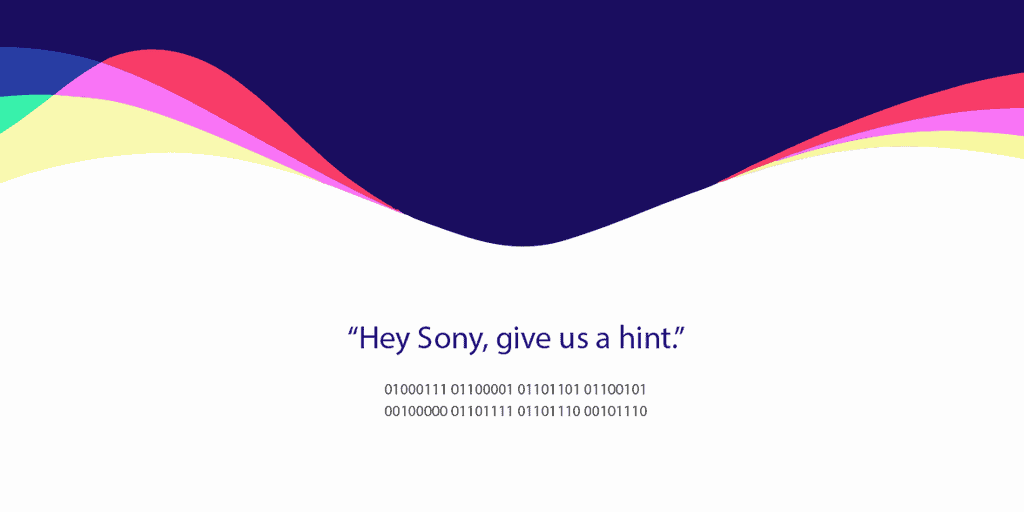 We know that the new iPhone is going to be announced right about now, following the company's tradition, they are expected to use the same design as the ones that were introduced last year with only a few upgrades in their internals. Apple usually teases these events using a colorful background and a tagline to keep everyone intrigued. This year, they made a reference to its digital personal assistant Siri, as the background image shares some aesthetics with the ones found in the app and the tagline read "Hey Siri, give us a hint". The posters invited iPhone users to actually ask the assistant that very question and it obviously gave some quirky answers to avoid giving an actual answer.

Now, Sony has shared an interesting image in the official Sony Xperia Twitter account. It's almost the same image used by Apple, but it doesn't feature an element that would make reference to the Apple logo. The tagline reads "Hey Sony, give us a hint." and it is followed by a binary code which translated to text reads "Game on". This makes a reference to the newly announced Xperia Z5 lineup, integrated by 3 phones. The most interesting one is the Xperia Z5 Premium, which is designed with shiny surfaces to make it really stand out and it is the first phone to sport a 4K display.

Sony seems confident that Apple won't announce a better offering, and they are probably right, at least in terms of that extremely dense display. Apple doesn't really compete with Android manufacturers in terms of technical specifications, but rather with brand recognition, ecosystem and the overall experience. Still, it is important for companies to highlight the features and technologies that make their products better than the ones of the competition. Some of the specs found on the Xperia Z5 Premium include a 5.5-inch display with a resolution of 2160 x 3840 pixels, resulting in a density of 806 ppi. Powering up this device is the Snapdragon 810 processor with 3 GB of RAM and the main camera with the new 23-megapixel sensor features the fastest autofocus system. The hardware is also rated IP68, which makes it waterproof and dustproof, another feature that would be most certainly missing on the new iPhone.