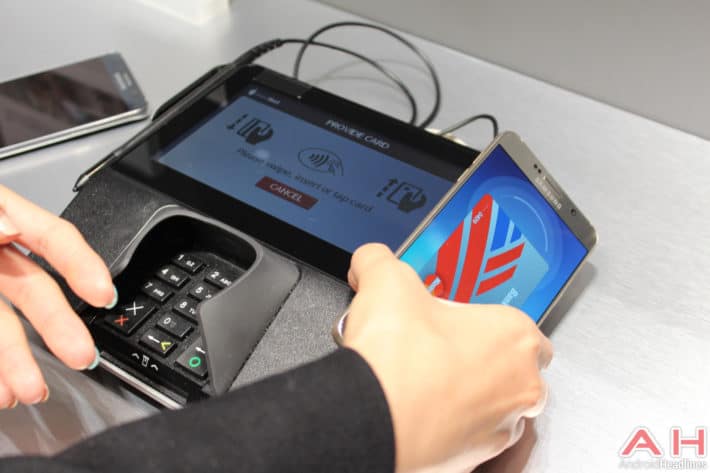 Samsung announced its mobile paying system along with the original Galaxy S6 series, it's called Samsung Pay and it's currently available in just four devices from the company, the Galaxy S6, Galaxy S6 Edge and the more recent Galaxy S6 Edge+ and Galaxy Note 5. The reason only those devices are compatible is because in addition to the NFC technology that is supported by the service, allowing to pay by approaching the phone to a compatible terminal, it also supports a technology called Magnetic Secure Transmission (MST), which emulates the magnetic code that a credit card would use, so it is compatible with older terminals. This certainly represents an advantage over services like Apple Pay or Android Pay, as those are only compatible with NFC, so Samsung has been marketing this service as "The most accepted mobile payment" and it recently shared some surprising results of its adoption.

It has been available in South Korea for over a month now and it has achieved over 1.5 million transactions. On the US, it has been part of a Beta program for almost a month too, so users with a compatible device, a bank account with one of the banks they have as partners and have cellular service from one of the compatible carriers as well. Samsung Pay works in a simple way, users just have to swipe from the home button to the screen or open the Samsung Pay App, then the fingerprint should be scanned to verify the transaction and place it close to the terminal.

Now, the Samsung Pay App is being updated to version 1.3.1716 with some improvements. Some visual elements have been updated and now the virtual number of the card that is being used will appear without having to tap into the information screen. The Settings menu of the app now features an about screen to view some information of the app and there's also an update button. The Simple Pay settings feature some toggles to turn the swipe functionality on or off from the Lock Screen, the Home Screen or when the screen is off. This update is probably closer to the final app for the launch of the service on the US on September 28th. Samsung will also bring the service to the UK, Spain and China.