Skip to content
Trusted By Millions
Independent, Expert Android News You Can Trust, Since 2010
Publishing More Android Than Anyone Else
32
Today
196
This Week
835
This Month
6762
This Year
124281
All Time 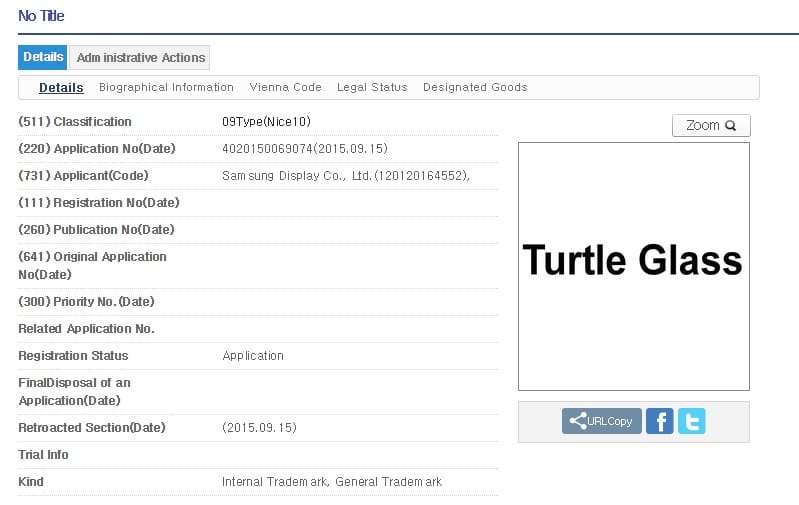 Samsung keeps making moves that look like they are trying to be as self-sufficient as possible.  They are making and using their own DDR4 RAM, UFS 2.0 Flash memory, their Exynos 7420 in their new line of phones this year, their own batteries with rapid charge and quick wireless charging and now it looks like they may make their own ‘Turtle Glass’ rather than using Corning’s Gorilla Glass.  It does make sense since Samsung owns and operates Samsung Display – a global leader in design of displays and the largest manufacturer of both OLED and LCD display panels in the world.  With their great interest in curved and flexible displays, it may be that the time has come for Samsung to design their own glass panels in conjunction with their new displays.

Registering for the ‘Turtle Glass’ name would be the first step in using their own panels – after all, a turtle is known for its tremendously hard shell and is a great commercial name to compete with Gorilla Glass.  It is not known when Samsung may be using their own Turtle Glass on their devices, but the timing could not be better with the talk Samsung’s next generation of phones – the Galaxy S7 or foldable displays and Project Valley.  The patent is intended for protective glass designed for smartphones, tablets, smartwatches, cameras, navigation systems and so on, literally covering all of the uses of strong glass in the electronics field.

Samsung worked closely with Corning to develop the dual curved displays used on the Galaxy S6 Edge and S6 Edge+ as the failure rate was so high and costing Samsung more money for each good display.  With Samsung expanding their curved and flexible and now folding display, Samsung may be thinking it would save them money to make their own Turtle Glass displays.  A folding smartphone would certainly lend itself to extra scratches or nicks and developing both the device and display cover at the same time makes more sense than farming it out.  If Samsung does begin using their own Turtle Glass, it could be a huge blow to Corning and their Gorilla Glass losing the business of the number one worldwide global smartphone manufacturer.