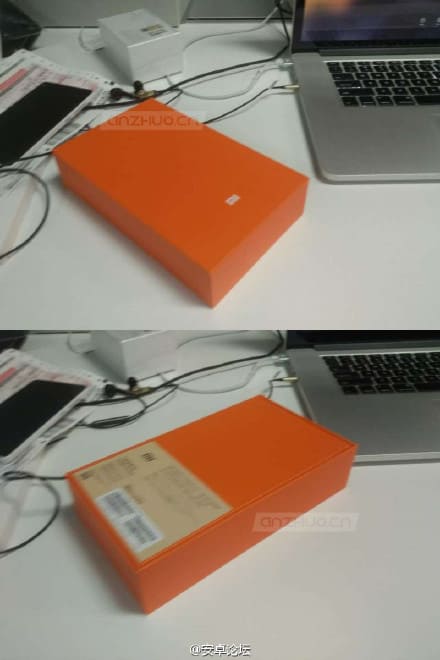 Xiaomi may not have announced its fifth generation flagship smartphone as yet, but some of its recent mid-range releases have been creating quite a stir. The Redmi Note 2, which was launched last month by the company, received an overwhelming response from the smartphone buying public in China, which was to be expected, seeing the high-end specs at dirt-cheap pricing. The company however, lost out on a large chunk of its revenue, as it wasn't able to launch the device in its second largest market, India, because of ongoing legal battles with Ericsson. That of course, hasn't slowed down the Chinese smartphone vendor, who is now prepping to introduce the Mi 4c smartphone in its home market of China on the 22nd of this month.

Coming to the whole point of the current news, the purported retail packaging of the upcoming Mi 4c has now been leaked, showing off a bright orange box rather than the environment-friendly brown cardboard box made out of recycled paper that the company has been using over the past few years. Images also seem to suggest that the upcoming handset will continue on with Xiaomi's new-found love for bright colors, as the phone will supposedly be made available in a number of different color options like pink, blue and yellow, alongside the traditional black and white, much like the aforementioned Redmi Note 2. As for the pricing of the device, Xiaomi will sell the Mi 4c at a price of 1,499 Yuan ($235), which is pretty incredible, when you consider the kind of hardware the device has to offer.

Talking about the hardware on the Mi 4c, the device is believed to feature a 5-inch 1080p display, and will be powered by Qualcomm's Snapdragon 808 SoC, which comes with an integrated 64-bit hexa-core CPU. The smartphone will offer either 2 GB or 3 GB of RAM depending on the variant, and its storage options will vary between 16, 32 and 64 GB. As for its cameras, the rear-facing shooter on the device will come with a 13-megapixel sensor, while the front-facing selfie-cam will have a 5-megapixel sensor. The handset will carry a 3,000 mAh battery, an USB Type-C connector much like the OnePlus One, and will ship with Android 5.1.1 out of the box, in the form of Xiaomi's proprietary MIUI 7 custom ROM.