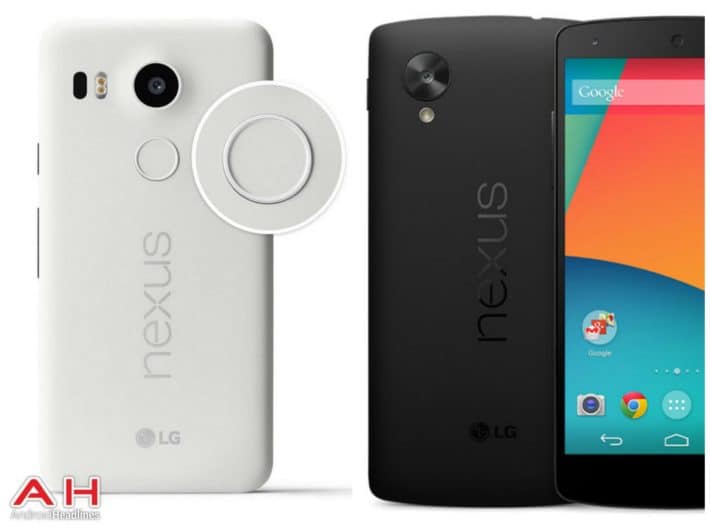 Today is officially Google Nexus day – among a few other things – and Google is announcing two new Nexus smartphones today, which is a first for them.  New to Nexus is the huge Chinese company, Huawei with a new higher end Nexus 6P and also is an old friend, LG and their new entrant, the Nexus 5X.  In this article we will take a look at the differences and similarities between the old model, Nexus 5 (2013) and the new Nexus 5X.

As we said earlier, the Nexus 5X is the lower end of the two new devices and because of that it is a typical plastic affair with the care and respect that LG places on their designs and builds. It measures 147 x 72.6 x 7.9 mm and weighs in at 136 grams.  It comes in three colors – Carbon, Quartz and Ice Blue and will cost you $379 for the 16GB model and $429 for the 64GB version. Pre-Orders are available now in the Google Store for delivery sometime in the middle of October. Pre-orders include a $50 Play Credit as well as a free 90-day subscription to Play Music Unlimited.  Google has said they will also be available in several stores (most likely Best Buy and others).  Whether it will be for sale at the carriers, Verizon, AT&T, T-Mobile or Sprint was not mentioned. 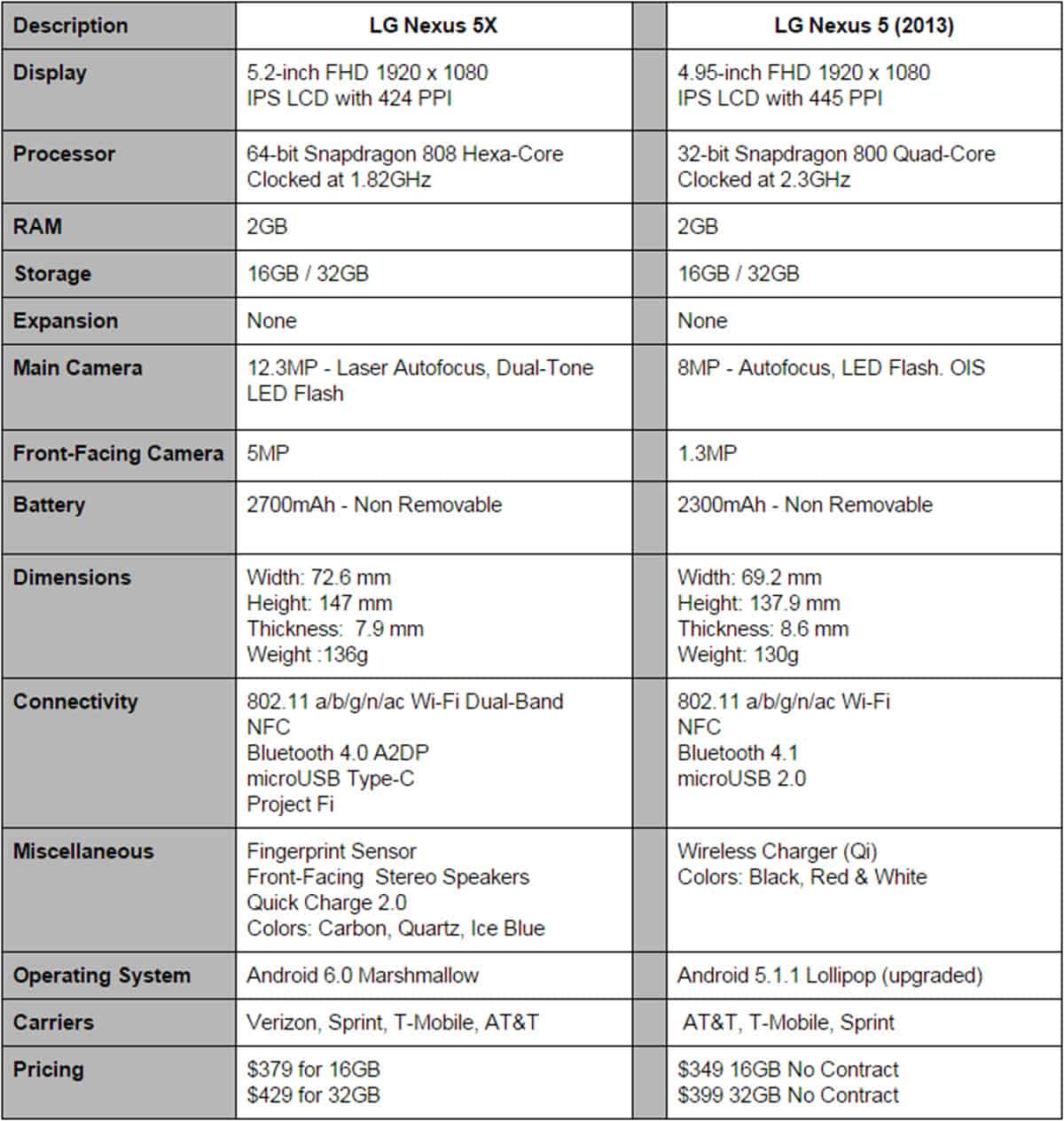 When it comes to the displays on the original LG Nexus 5 and the new LG Nexus 5X, there is not much difference other than the display size.  The original had a 4.95-inch Full HD LCD display with a resolution of 1920 x 1080 pixels and about 445 pixels-per-inch (PPI). The new display uses the same FHD LCD display technology, but LG bumped the size up to 5.2-inches, which reduces the PPI down to 424…not that the human eye could tell any difference.  LG had to do this to keep the cost down as this is the lower spec'd Nexus smartphone this year, while the Nexus 6P uses the Quad HD (QHD) display.

The Nexus 5 was packing 2GB of RAM and LG decided to stay with 2GB in the Nexus 5X. Both Nexus smartphones have the same internal storage of either 16GB or 32GB and there is no way to expand that memory as they both lack a microSD card slot.

In the camera area we are looking at some changes – some good and some bad.  The original Nexus 5 had an 8MP sensor for the main shooter that included autofocus, an LED flash and OIS (Optical Image Stabilization).  The Nexus 5X increased the sensor to 12.3MP, improved the autofocus by adding Laser, switched to a dual-tone LED flash, but in an apparent effort to keep the price down, LG did away with the OIS.  The original Nexus 5 used only a 1.3MP front-facing camera (FFC), but the Nexus 5X uses a respectable 5MP FFC for selfies and video chatting.

Battery life is always an important part of a mobile device – nobody likes to wait while their device is plugged into the wall recharging the battery.  LG did increase the battery size in the Nexus 5X to 2700mAh – up from a paltry 2300mAh on the original Nexus 5.  The new Nexus 5X does have the Quick Charge 2.0 feature that will help shorten your down time.  Both batteries are non-removable and only the original Nexus 5 offered wireless charging.

Some other items to note on the new Nexus 5X – it does include a fingerprint sensor for unlocking the device and making mobile payments via Android Marshmallow and Android Pay.  LG added dual, front-facing stereo speakers for a big improvement in sound. The new Nexus 5X will be available online in the Google Store, making pricing, delivery and updates all consistent.  Pre-orders start on today.

Although the new LG Nexus 5X lost its wireless charging and OIS, overall it looks like a great device for the price.  This Nexus smartphone should help make loyal Nexus users happy that Google has seen fit to include a more reasonably sized and priced option.