We are just five days away from September 29th when Google will unveil their new Nexus devices. The rumors about these handsets have been popping all over the internet for months and at this point, they do offer a clearer picture of what is to come. There will be two smartphones, the Nexus 5X, codenamed Bullhead and made by LG, and the Nexus 6P codenamed Angler from the Chinese manufacturer, Huawei. Earlier today, reports came in with benchmarking details about the LG Nexus 5X, bringing further confirmation for what has been leaked before. Of course everyone is also curious to see what Huawei has been baking for us these last few months, so, here it is.

Expect the Huawei Angler to be a very powerful device. Leaked Geekbench tests for this phablet show an octa-core Qualcomm Snapdragon 810 SoC running at 1.9 GHz, an Adreno 430 GPU coupled with 3 GB of RAM. Internal storage options will start at 32 GB, then jump to 64 GB and 128 GB offerings. If you like numbers, here they are: the single-core performance scored 1487 points, while the fully powered multi-core scored 6236 points, an amazing jump from the 1000 pts and 2919 pts from the LG Nexus 5X on single-thread and multi-thread tests, respectively. The device will sport a big 5.7-inch screen with QHD resolution (2560 x 1440). The phone features a 13-megapixel rear camera and an 8 MP front shooter for selfies. Moreover, previously leaked images show a fingerprint reader on the back and front-facing speakers. The device is likely to be presented as a premium offering and color options are set to be white, black, gray, and gold. Other rumors suggest the handset will have a Type-C USB 3.0 connector. Both phones will come bundled with Android 6.0 Marshmallow, the next version of Android.

Nexus devices are dream handsets for most avid Android fans, and it won't take long until our curiosity is fed with some fresh Google news. Other than the release date, we don't have any information yet regarding availability and price for the Huawei Nexus. However, as the LG model will come with slightly inferior specs than its Chinese sibling, it is likely to have a lower price tag. 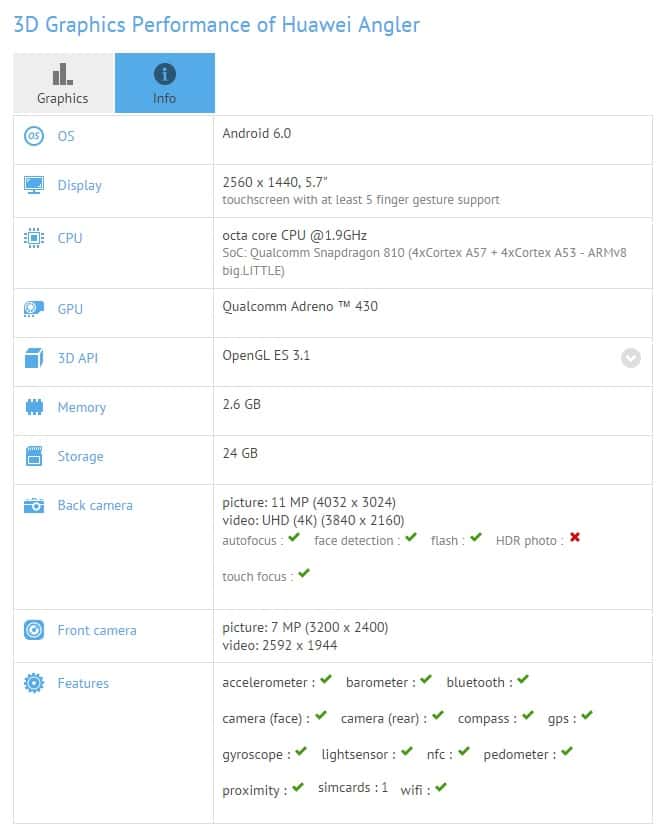