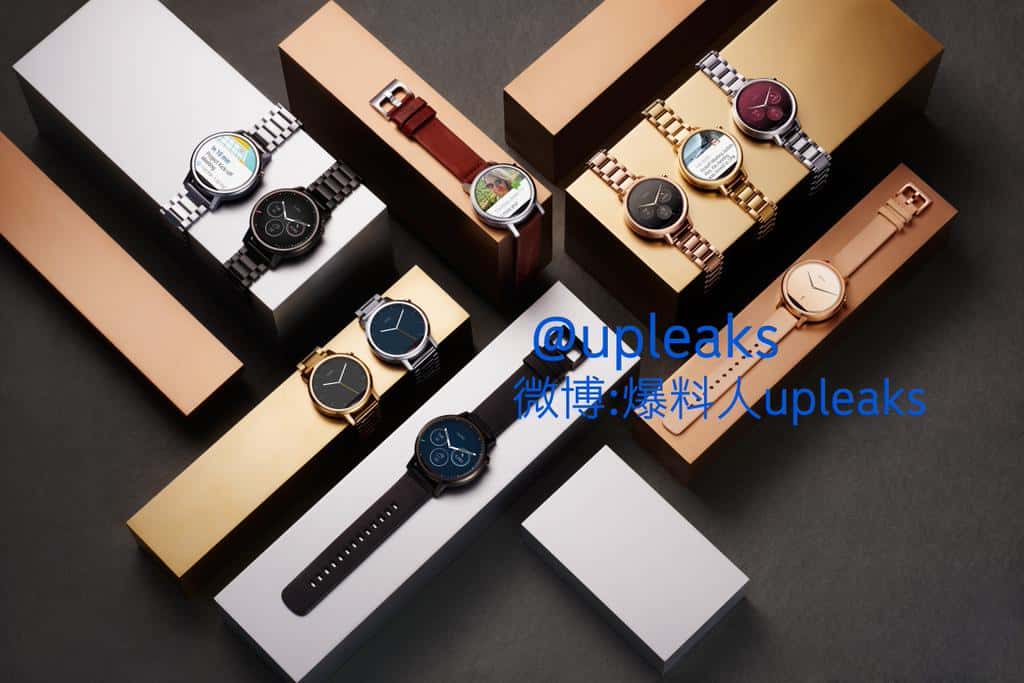 Motorola has announced three new handsets at the end of July, and we've seen tons of Moto-related leaks in the last couple of weeks. The company will showcase their Moto 360 (2015) smartwatch(es) on September 8th, and we already know exactly what will they look like thanks to a number of leaked renders and real life images. Motorola is actually planning to release the regular Moto 360 smartwatch in two sizes (Moto 360S and Moto 360L), and the Moto 360 Sport smartwatch will probably arrive later this year (November, according to rumors).

That being said, @upleaks has shared yet another Moto 360 image via Twitter. If you take a look at the image above this article you'll get to see Motorola's upcoming 2nd-gen Moto 360 smartwatch in various combinations and colors. The leather, steel and silicone straps are showcased here in various colors, and same can be said about the watch base. The second and third image in the gallery down below will give you a good look at the back of the Moto 360 smartwatches (both S and L sizes). If that's not enough for you, feel free to check out recently leaked renders which give you an even closer look at Motorola's upcoming smartwatch.

It seems like the 'flat tire' will be present on the 2nd-gen Moto 360 as well, something not many people are actually happy about. This 'flaw' won't be as pronounced as it was in the first-gen model, it's smaller this time around, and this also means that Moto 360 will have the largest display-to-body ration out in the market (as far as smartwatches go), so that's definitely something, and perhaps a reason enough justify the flat tire presence.

The 1st-gen Motorola Moto 360 was, and still is, a beautiful device. Motorola did change some things this time around, and it's quite visible. The watch will be thinner, but the bands won't go under the body of the watch this time around, but will attach to hinges which are quite visible in these images. We're hoping that Motorola learned its lesson from last time, and that they'll use a more recent processor in the 2nd-gen Moto 360 in order to avoid any issues once the watch launches. That's more or less it, the watch will be announced soon, and if anything leaks before the press conference, we'll let you know.