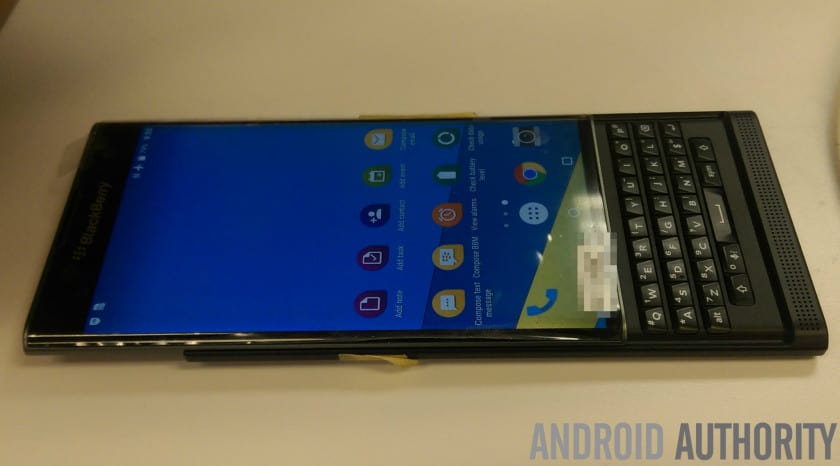 As a last ditch effort to save the company from insolvency, Canada-based former smartphone giant BlackBerry Limited (formerly known as Research in Motion) is jumping headlong into the Android bandwagon. Now whether that realization came a little too late for the Canadian smartphone maker is anybody's guess, but the company is definitely trying to put its best foot forward and include the best of both worlds when it comes to the company's very first Android smartphone – the much-rumored BlackBerry Venice. The number of leaks the device has seen over the past few weeks has already given us a fairly good understanding about a lot of the hardware specs of the upcoming handset, including the fact that the device will come with the BlackBerry's trademark physical QUERTY keypad.

The latest report about BlackBerry's first ever Android smartphone comes from Android Authority. The website has published a number of images of what looks to be a smartphone with a sliding QWERTY keyboard, a rather large display and the stylized BlackBerry logo prominently displayed on the top front bezel. The most interesting part about the phone of course will be its integration of features that had once made the brand synonymous with enterprise and corporate usage – security. To drive that point home, the boot animation of the Venice reportedly shows Bugdorid, the green Android robot, holding up a shield. The symbolism of the imagery cannot be underestimated as BlackBerry seems desperate to get its point across to its corporate clientele that its devices continue to remain as secure as they've always been, even as Android security continues to be hotly debated.

The site is also quoting the source of these images to report that the device will come with features like keyboard shortcuts for creating certain tasks. The company apparently is going big on shortcuts in an attempt to make things easier and more intuitive for its users. That means you'll get shortcuts for direct access to local search when sweeping up from the Home button, as well as for Google Now and for messaging of all descriptions – e-mails, texts and of course, BBM. Continuing on with the focus on productivity, BlackBerry will be providing home-screen shortcuts for the event planner to setup new events and check for scheduled appointments.

As for the device itself, the BlackBerry Venice is slated to launch this November at least on AT&T and T-Mobile, and has been rumored to feature a 5.4-inch QHD (2560 x 1440) display with curved edges on both sides like the Galaxy S6 Edge+. The smartphone is also said to come with an 18-megapixel primary camera and a 5-megapixel front-facing camera, with 3 GB of RAM and the Snapdragon 808 from Qualcomm under the hood.