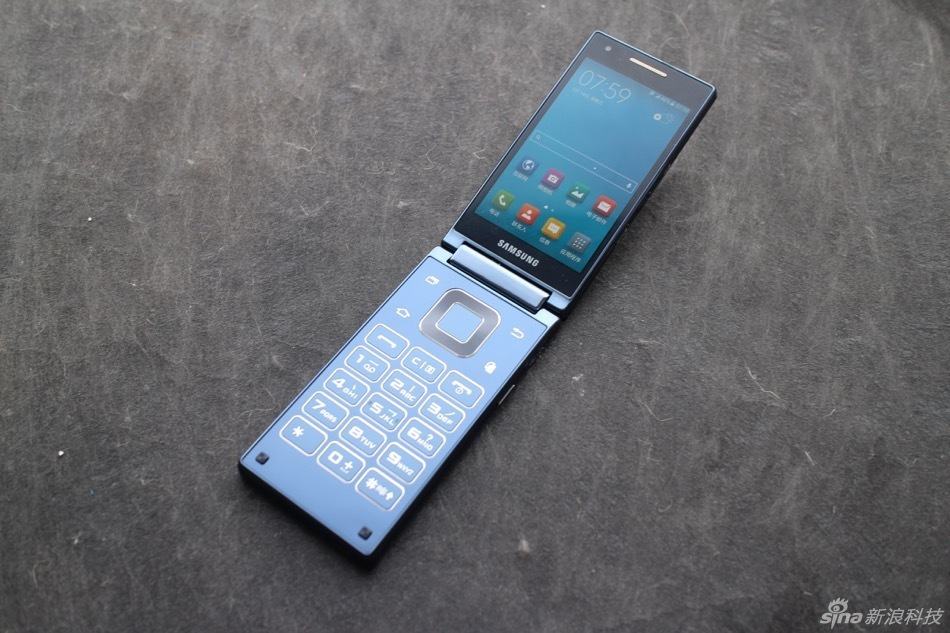 The popularity of the modern smartphone form factor has made old fashioned flip-phones an endangered species for the most part, if not a completely extinct one. While the popularity of flip phones have indeed gone down drastically over the past few years, Samsung and LG from time to time keep introducing a few such devices in the market, although they're mostly restricted to East Asia. Samsung had originally introduced the W999 flip phone with Android Gingerbread back in 2011, and since then, has followed it up with the Galaxy Golden in late 2013, and the Galaxy Folder earlier this year. The last mentioned was meant exclusively for the South Korean market. As a matter of fact, even LG Electronics is expected to launch an Android Lollipop-powered clamshell handset dubbed the LG Wine later this month.

Even though none of the clamshell devices with a supposed retro-cool vibe have managed to set the sales charts on fire, looks like Samsung still hasn't thrown in the towel in trying to win over all the Moto Razr V3 aficionados. The company is believed to launch a brand new Android-powered flip-phone in China at some stage in the very near future, if media reports are to be believed. While the phone doesn't have a bonafide name as of now, it does come with the model identifier SM-G9198, and was officially listed on the Samsung China website last month, giving us some amount of information about what the upcoming device is going to be like. As for the handset itself, while we already had access to official renders of the upcoming gadget, Chinese website Sina has now got its hands on a few real-life images of the device which gives us an idea about how it may actually look like once introduced in the market commercially.

As for the hardware specs, the listing last month let us know that it will be a fairly premium device, and will feature dual Super AMOLED displays measuring 3.9-inches each with a resolution of 1280 x 768, and are protected by Gorilla Glass 4. According to the official listing, the smartphone is powered by Qualcomm's Snapdragon 808 SoC, and comes with 2 GB of RAM and 16 GB of built-in storage, which can be expanded by up to 128 GB with the help of a microSD card. The phone will sport a 16-megapixel primary camera with an f/1.9 aperture and a 6-megapixel secondary camera. The battery on the device is rated at 2,020 mAh, and the smartphone will run Android 5.1.1 Lollipop out of the box. The phone will measure 120.3 x 61.2 x 16.3 mm and weigh 204 grams. There's no word on whether the device will launch outside of China, but even if it does, it is unlikely to be officially available outside East Asia anytime soon. There's also no pricing info available at the moment.