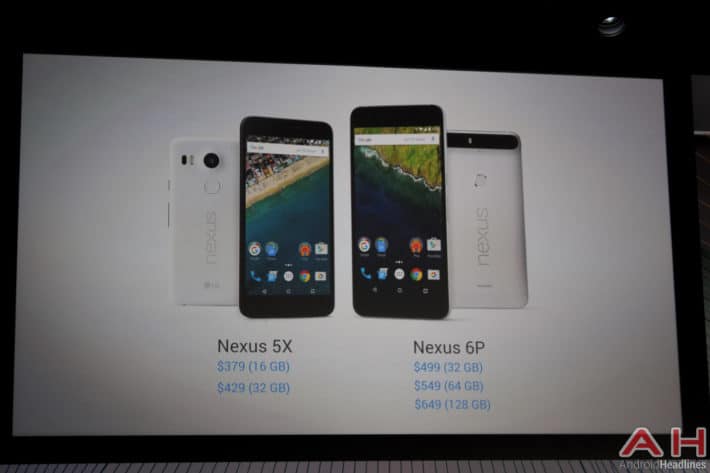 As we expected, both LG and Huawei were announced as bannermen for the Nexus line earlier today. All of the leaks and rumors turned out to be true and those looking for a new Nexus smartphone have two choices that not only suit their wallet, but their preference as well. The Nexus 5X was announced as a 5.2-inch, more affordable smartphone, while the Huawei Nexus 6P is more like last year’s affair. This is packed full of technology and it’s a fairly large device, but just like last year’s Nexus 6 from Motorola, the Nexus 6P is not cheap, at least by traditional Nexus standards.

Gone are the days where Nexus devices are purchased directly from the Google Play Store, as we now have the Google Store. All hardware and devices that Google has some sort of direct involvement with – including Android Wear watches like Huawei’s own – are available from the Google Store. The Nexus 6P is no exception, and is listed for $499.99 for the 32GB model, this is not exactly cheap but to consider this is a device that’s completely unlocked and can be taken anywhere, sans contract, things aren’t too bad. If 32GB of storage is not enough for you, or you just enjoy spending money, users can pay $549 for the 64GB model or $649 for the 128GB model.

Pricing will of course vary depending on where you’re ordering from, and delivery costs are never included when purchasing a Nexus device. The Google Store will stock the Huawei Nexus 6P in the US, UK, Ireland, Germany and Japan and while there was no concrete date for launch just yet, “later in October” was the line used on stage. Offers will include a US-only inclusion of $50 Play Store credit and a 90-day trial of Google Play Music All Access for both US buyers and those in the other announced countries. It doesn’t matter which version of the Nexus 6P you buy – or if the smaller Nexus 5X is more your style – as they are all supported. We have lots of Nexus coverage going out today, and we’ll be bringing you all the news as quick as we can throughout the day.