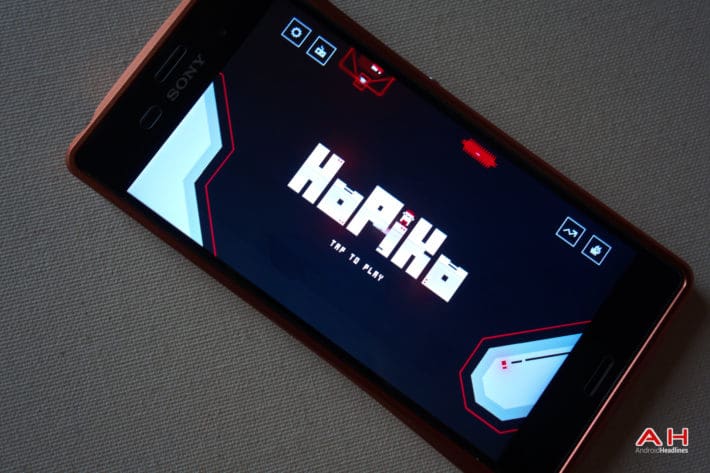 Development team Laser Dog is back with another retro style arcade hit, following up the popular game 'Alone' with the recently released HoPiKo that launched in the middle of this week. As a gamer, you should be willing to do anything you possibly can to save video games and bring them back from extinction, and it just so happens that in HoPiKo you get to do just that. Video games have been brought to their knees by the evil nanobyte virus who have infected game consoles of all types on a massive worldwide scale, killing off games forever, or so it was thought, and it's your job to stop the nanobytes and bring games back to life. The gameplay is fast paced, and it'll be a little challenging at first but you quickly get the hang of things.

The idea is for you to jump from platform to platform dodging any of the obstacles along the way. You can only survive by landing on the platforms so if you miss and hit the walls or any of the nanobyte viruses before you make it to your destination, you die. To top things off there is also a time limit. You only have so long to make your move and jump to a new platform, so you'll need to be quick on your feet with a hyper trigger finger.

As you play you'll notice not everything is as it seems. There is certainly a direct path to each platform but certain levels will also have shortcuts you can take to get places quicker, and with literally hundreds of levels and each level being split up into five bite-sized mini stages there's plenty of gameplay to be had. Google Play Games services are also integrated to provide you with leaderboards and achievements. If you enjoy old school arcade style games, HoPiKo won't disappoint here. The graphics are an homage to games from the NES days but with livelier colors and a more HD like feel to appear more vivid, and it wouldn't feel retro without an upbeat and slightly chaotic chiptune soundtrack. If you fancy giving HoPiKo a try, you can grab it from the Play Store now for the cost of $3.99.