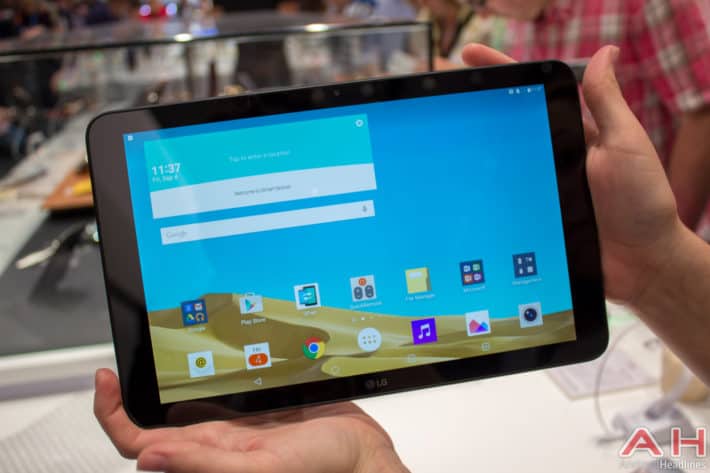 LG is one of many smartphone OEMs currently showcasing their products at IFA in Berlin. We've already shared tons of content from IFA, and there's still much to come. Anyhow, back to LG. The company is showcasing quite a few devices they released this year, including the LG G Pad 2 which was announced last month by the company. LG G Pad 2 is LG's second-gen G Pad tablet, and it comes in two versions, the 8-inch and 10.1-inch variant. That being said, we managed to get our hands-on the bigger, 10.1-inch variant of the tablet, read on.

The LG G Pad 10.1 features a 10.1-inch 1920 x 1200 IPS LCD display. The tablets also packs in 2GB of RAM and 16GB of internal storage. Qualcomm's Snapdragon 800 quad-core SoC powers this device along with an Adreno 330 GPU, and a non-removable 7,400mAh battery is available on the inside. The 5-megapixel is located on the back of this tablet, and a 2-megapixel snapper is available up front. There's 16GB of internal storage available here, and you can expand upon that via a microSD card. This tablet will be available in 4G variant, and Android 5.1.1 Lollipop comes pre-installed here with LG's skin on top of it. The LG G Pad 2 10.1 measures 254.3 x 161.1 x 7.8mm, while it weighs 489 grams.

If you take a look at the images down below, you'll get to see this tablet up close and personal. We still don't know how much will it cost at this moment, but judging by its specs, this definitely won't sport a premium price point. Either way, stay tuned for more info, we'll report back as soon as something pops up.