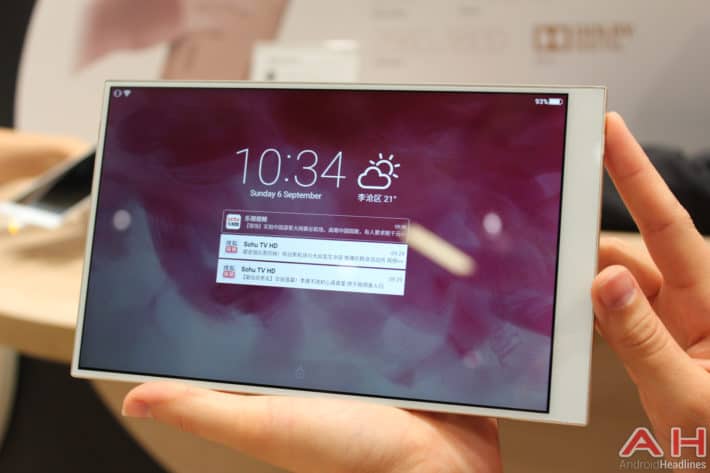 This year's IFA in Berlin is full of interesting tech, as it is every year. We've already seen tons of compelling products either announced or just showcased at the show floor, and our hands-on coverage continues. We're here to talk more about HiSense, a China-based company which brought several products with them to Berlin. We've already checked out their C1 and C20 (King Kong 2) smartphones, and are here to check out HiSenses' arguably most interesting product, the Magic Mirror tablet.

The HiSense Magic Mirror is a tablet which has barely any bezel on it. This tablet has a 90% screen-to-body ratio, which is truly impressive. Check out the images down below if you'd like to take a closer look at it. This is a mid-range device, not a high-end product some of you might think. This device features an 8.4-inch 2560 x 1600 display, 2GB of RAM and 16 or 32GB of internal storage. The tablet is fueled by Rockchip's RK3288 processor, and it packs in a 4,580mAh battery. Android 5.0 Lollipop comes pre-installed here, and the tablet's bezels are only 2.7mm thick (aside from the ones on the bottom). The tablet measures 199 x 121 x 7.1mm, and weighs 280 grams.

This tablet is made out of metal, and sure looks interesting. The loudspeakers are located on the back of the tablet, and there's also a capacitive button available underneath the display. This tablet is already available in China via JingDong Mall for 1,799 Yuan ($283), and this is a 16GB variant we're talking about here. That's more or less it, check out the images if you're interested, and we'll report back if any additional info surfaces in the meantime.