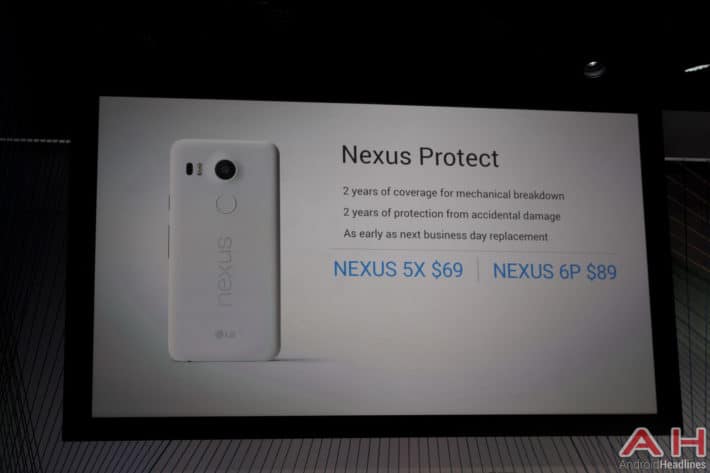 The Nexus line of devices have been around for a long, long time and they’ve change a whole lot since the original Nexus One was launched what seems like forever ago now. With each iteration, it feels more and more like Google considers these a genuine consumer product, which of course is exactly what they’ve become over the years. The idea was to deliver a device that developers and those interested in the platform could get their hands on a device that didn’t break the bank and had all of the right blend of hardware and software to show off stock Android. back in the days of the Galaxy Nexus, there were no such thing as Nexus accessories, now there are official cases and more.

Today, Google announced one more extra charge that people can pay for, but rather than get something tangible like an accessory, the Internet giant is selling peace of mind. Consumers are clumsy, and we’ve all dropped a device and scuffed a corner or two, or worse smashed a display or destroyed a camera lens. Google gets this and have introduced, alongside the Nexus 5X and Nexus 6P, a new offer called ‘Nexus Protect’. For $69 for the Nexus 5X and $30 more at $89 for Huawei’s first Nexus, users get an extra year’s worth of warranty protecting “mechanical failure” as well as two-years worth of accidental damage. This means Google will replace that phone you dropped down the toilet, or wiped out on the sidewalk, all for the princely sum of less than a $100. This is similar to HTC’s UH OH program that they run in North America, and we’re sure many will welcome the new offering, especially those spending upwards of $500 on the Nexus 6P.

Speaking of hardware, we managed to spend some hands on time with both the Nexus 5X and Nexus 6P, and these are some of the best Nexus devices that Google has ever created, of course we’ll have to put them through their paces to be sure, but both seem solid and well-made. With Nexus Protect of course, you can be as rough as you want, and get a replacement device as early as the next day, making sure you get hold of a new device as quickly as possible.