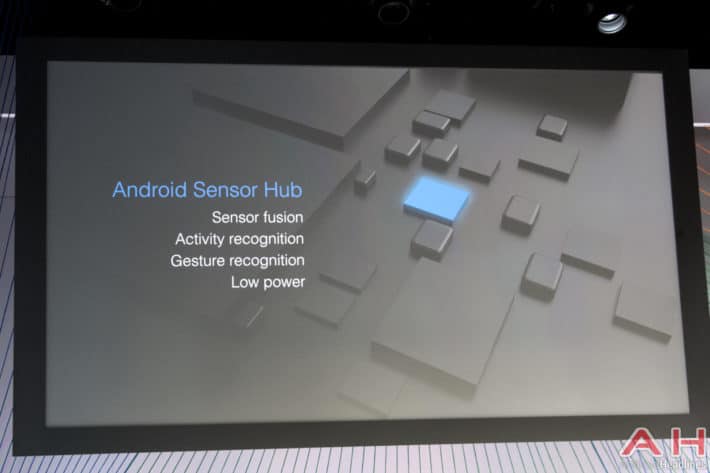 Today at Google’s big Nexus announcement, they not only released the new LG Nexus 5X and the Huawei Nexus 6P smartphones, but a slew other products – most notably Android’s new operating system, Android 6.0…better known as Marshmallow.  Another announcement had to do with a new low-powered “Android Sensor Hub” that was built into the two new Nexus devices.  According to Google, this Sensor Hub will assist in “Sensor fusion,” “Activity recognition,” “Gesture recognition” and sense “Low power.”

It does not do much by itself, but will allow app developers to incorporate that Sensor Hub to work with their applications – for instance, when you pick up your smartphone, the Sensor Hub will relay that information (movement) to the app and may turn on your device.  This chip allows the phone to run advanced activity recognition algorithms – for instance the Sensor Hub will be able to take sensory data derived from disparate sources and gives results that are more accurate than if that sensory data was used individually. It will allow the Nexus devices to differentiate between activity and gesture recognition, allowing the devices to better understand what the user is trying to accomplish.  The Sensor Hub will be able to recognize low power and possibly go into a power saving mode automatically based on your current activities.  Picking up your device could activate notifications and display them in a low-powered black and white mode until the device is properly activated by the user.

As Google’s open-source operating system ages, it is becoming more sophisticated and able to help developers design apps that can take advantage of the many sensors, hardware and software developed by Google’s own engineers.  If Google expects the hardware and apps to compete with Apple’s perceived superiority by many, it needs to develop its own in-house products as a sort of advertisement about what Google’s Android is capable of doing. Incorporating those features in their new Nexus devices is Google’s way of showing off its pure vanilla Android 6.0.  Google’s efforts are really beginning to shine with the many new features in Marshmallow, because you know with the recent release of iOS 9, comparisons will be inevitable.