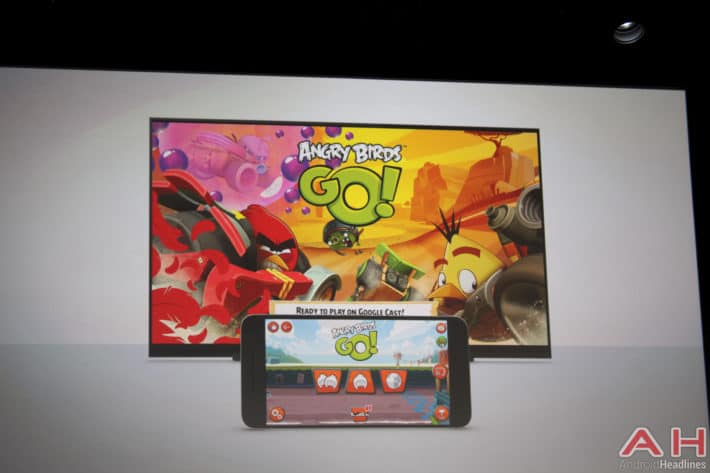 Alongside the Nexus 5X and the Nexus 6P this morning, Google also announced the second generation Chromecast device which comes with quite a few improvements over the previous model, not the least of which is the design and the better connection to WiFi capabilities to keep things streaming more effortlessly and uninhibited than before with the older model. Google also improved aspects of the casting technology so things work better when casting content from your device. Google isn't just focusing on movie and TV content though, they're also looking forward towards gaming content, as the new Chromecast now has something called Game Casting which could vastly improve the casting experience for games from the mobile device to the big screen.

To be clear, casting games from the original Chromecast to a big TV or monitor is already possible, but with Game Casting on the new Chromecast this specific feature focuses on the gaming experience and is dedicated to providing users with an optimal experience when throwing up mobile games. There are some caveats though, as games will have to support the Game Casting feature to receive the improved functionality. The good news is that it seems like Google has already started working with a list of popular game developers to get things up and running as soon as possible, namely companies like Rovio for games such as Angry Birds GO which they demoed during the event, as well as games like Monopoly Here and Now.

There wasn't a huge list of games mentioned at this point in time, but that's to be expected as Game Casting won't actually be rolling out just yet. Google states it will be rolling out over the next few months so presumably by Christmas time users should expect to see the capabilities become available. When users cast games that support the new Game Casting feature, the phone itself acts as the controller, and this includes not only Android devices, but iPhones as well which opens up the support for playing games from either platform, something which many mobile gamers are surely happy about. Just like the original Chromecast, Google is selling the second gen Chromecast for the price of $35, and it comes in 3 colors.