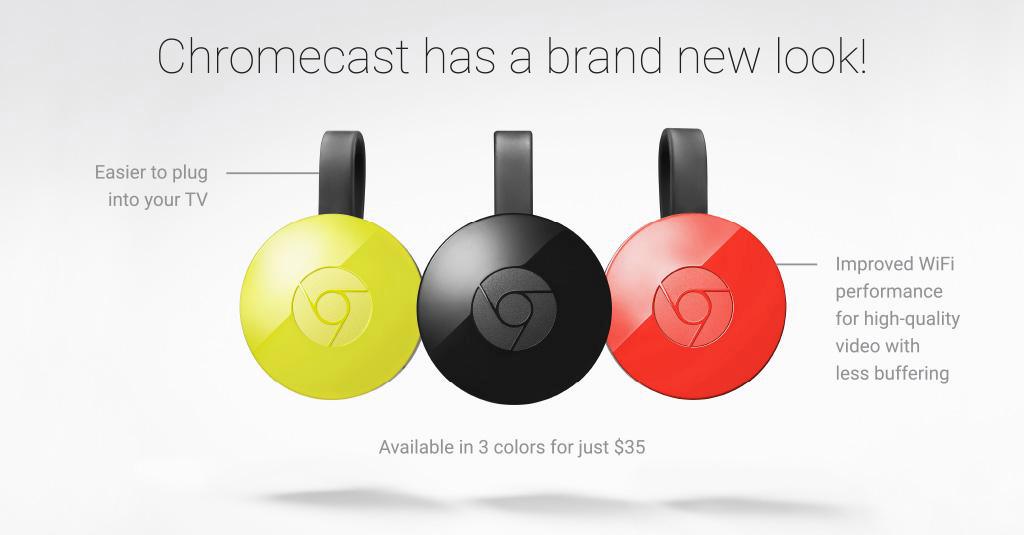 This morning, alongside a new Nexus 5X from LG and a Nexus 6P from Huawei, Google took the wraps off of a new Chromecast. The original Chromecast was announced in July of 2013 alongside the Nexus 7 2013. It was actually a surprise announcement and quickly became one of the best selling TV dongles out there. It launched before Android TV, which Google also announced a new set-top box with Android TV today.

The new Chromecast will be available in a slew of colors including yellow, red and black. It will also be priced similarly to the original Chromecast at $35. The Chromecast will still plug into the back of your TV using a HDMI port. And it'll be given power through a micro USB port on the dongle. However, we'd recommend plugging it into the wall and not a USB port on the TV. As the TV's USB port may not give it enough power. The new Chromecast has dual-band 2.4GHz and 5GHz WiFi as well as support for 802.11 ac. They have also improved WiFi performance for the Chromecast, compared to the previous model. Which results in less buffering.

Google also debuted a brand new app with the new Chromecast today. Some of the new features in the app include seeing recommended apps, based on the Chromecast apps you've used. The app will also show you what's currently on TV, Google says they have partnered with services for this feature. So if you are logged into apps such as Hulu+, Google Play Movies, and others, you can see what's available directly from the Chromecast app instead of opening the Netflix or Hulu+ app. Google also says that they will only use apps that are installed on your phone. Google has also partnered with Spotify here, so that the Spotify app will finally have some integration with Chromecast. Although the app will have more integration with Chromecast for Audio which was also announced today.

The first Chromecast was a huge success, and with the second generation model coming with faster WiFi, and a better app, it's definitely going to be a huge success as well. The new Chromecast is also very small, and has a magnet built in so it can attach to the side of your TV and be out of the way. Pretty neat.