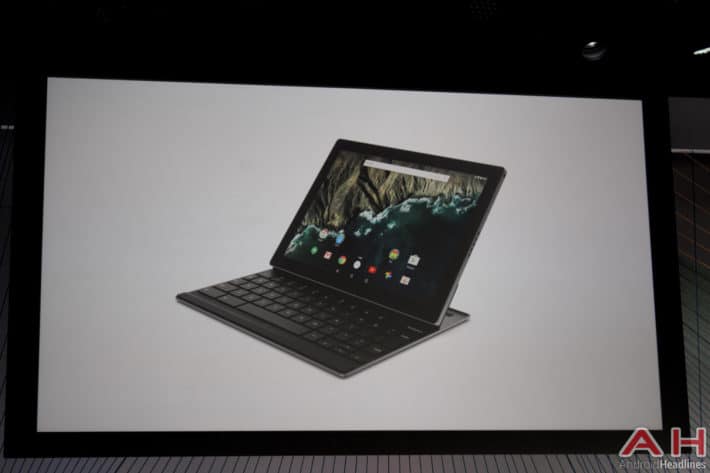 Google had lots to say during the company's press conference today. The Mountain View giant has announced plenty of hardware, while they also introduced some new software as well. As far as hardware goes, the company has officially announced the LG Nexus 5X, Nexus 6P, new Chromecast, Chromecast Audio and the Pixel C tablet. We're here to talk about the latter device, which is a very interesting take on an Android tablet, read on.

The Pixel C (the 'C' stand for 'Convertible') is first and foremost a tablet, but combined with a keyboard Google is also selling, it becomes and Android-powered laptop of sorts. Before we talk about that, however, let's check out the tablet's specifications real quick. The Pixel C sports a 10.2-inch 2560 x 1800 display along with 3GB of RAM and 32 or 64GB of internal storage. The Type-C USB 3.0 port is also included here, and the newest version of Google's Android OS comes pre-installed on this device. This tablet is powered by NVIDIA's Tegra X1 SoC, the same processor used in the company's SHIELD Android TV. The Pixel C is made out of anodized aluminum, and it's a sleek looking device, that's for sure.

Now, the Pixel C is a tablet, but as already mentioned, it becomes more than that if you combine it with the keyboard Google announced alongside this thing. The keyboard will attach to this tablet using magnets, and once attached, you get a small Android-powered laptop with an adjustable display (130 to 135 degrees). The tablet actually charges this keyboard when it's turned upside down, in other words, closed like a tablet. The accessory can function for 2 months without a charge though, so you don't really have to worry about that all that much.

If you take a look at the gallery down below, you'll get to see Pixel C in the flesh. As already mentioned, this tablet comes in two variants. The 32GB variant is priced at $499, while you'll have to splash out $599 for the 64GB model of this tablet. The keyboard, on the other hand, costs $149. This tablet, and its keyboard, will be available for purchase before the holidays, stay tuned.