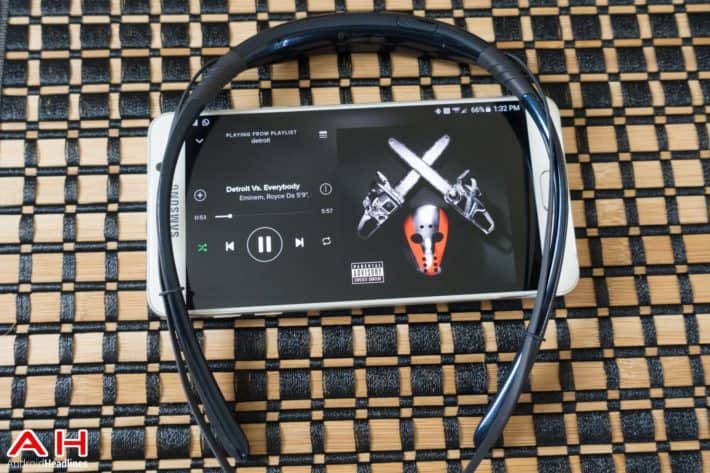 Around the neck headphones are gaining in popularity lately. With LG and Motorola really pioneering them, and now others like Phiaton and Samsung jumping into the game with their latest headphones. We've been using the Samsung Level U Headphones for the past few weeks, and now it's time to talk about Samsung's latest pair of headphones, in the Level U. One of the cool features in the Level U headphones, compared to some of the other around the neck style headphones out there, is that it uses S Voice, found in Samsung's own smartphones and tablets. With S Voice, you can use voice commands to change songs, volume, etc. While it does use S Voice, they do still work with other smartphones, tablets, laptops and other devices. Around the neck headphones are great for those that are working out, running, or using headphones for part of the day. As they just sit around your neck when you aren't using them.

One of the more important aspects of any around the neck headphones is the weight and battery life. While we want headphones that have enough battery to last all day long, we don't want them to be too heavy. The Level U's are pretty lightweight, in fact a few times I forgot that I had them around my neck. They are also thin enough to where you can hide them under your shirt or jacket collar if you need to. I'm not a huge fan of these around the neck headphones, but the Level U's have changed my mind.

Samsung includes three sets of ear tips with the Level U Wireless Headphones. This is great because not everyone has the same size ears, so you can choose to use the eartips that fit the most comfortably in your ears. Samsung also includes stabilizing wings with the ear gels so that they will stay in your ears even better when working out or just being constantly active. The ear gels are very squishy, which makes them fit into your ears easily, and very comfortably. I'm pretty picky about headphones that fit well in my ears as well as being comfortable, and I absolutely love the Level U's. Speaking about the headphones, the earbuds are magnetic and will attach to each other to keep them together when not in use. A bit different from the other around the neck models out there, which will attach to the arms of the around the neck portion of the headphones.

On the arms of the Level U's, we have an O which allows you to adjust the slack on the earbuds to suit your needs. Speaking of the arms, the outer edge is made of urethane, and makes the arms flexible. That way these will fit everyone's necks. As not everyone has the same size neck. All of the controls for the Level U's are found on the right side. We have three buttons there, an unmarked button as well as two others, each marked with a + or a -. A short press of the + or – will adjust the volume, while a long press will either rewind or fast-forward respectively. While the third button can act as a play/pause button for your music on a short press, and a long-press sends it into a pairing mode. On the back of the Level U's, there is the microUSB port. This is to charge your Level U wireless headphones, which are supposed to last around 10 hours of playback, or 500 hours of standby. In our time with the Level U's, we can agree that 10 hours of playback is right on point. Near the micro USB port, we have the power button. Which is an easy slider power button. Just be sure to slide them off when you're not using the Level U's to save battery.

How the Level U's fit around your neck and in your ears are important. But what about how they sound when you're on a run, or working out? Samsung has 12mm speaker units included here with the Level U. Samsung touts that these headphones deliver high-quality, and clear sound. Which is about what you'd expect from Samsung's Level line of audio products. Basses are nice and deep, and the music is nice and clear. They do get nice and loud, however if you turn the volume all the way up, you can hear it starting to get distorted as well as the music starting to crack on the high notes.

Samsung has also included 2 microphones on the Level U's so you can take and make calls. This is also needed to use S Voice voice commands. We made a few calls with the Level U's on, and others said that we sounded great, and they didn't hear a ton of background noise. Which is pretty amazing, and surprising. To take advantage of the S Voice voice commands, you'll need to download the Level  app from the Play Store. It's available for both smartphones and tablets. With S Voice, the only voice commands you can make are to either answer or reject a phone call. Unfortunately you are unable to just tell it to play certain music through Spotify, MILK Music, or Google Play Music, at least for now. With the Level App, you have a few nifty features here, including turning on notifications which can be read to you in your ears. As well as seeing how much battery is left on the Level U's, and toggling voice commands on or off.

Currently the Level U Wireless Headphones are going for $69.99 over on Amazon. They are available in Black Sapphire and in white. The Black Sapphire actually looks more bluish, but it will look great with the black Sapphire Galaxy Note 5 or Galaxy S6 Edge+. If you are someone that's very active, then the Level U's are going to be a great choice of headphones for you. I would definitely recommend these to those that run often, as they always stay in your ears.