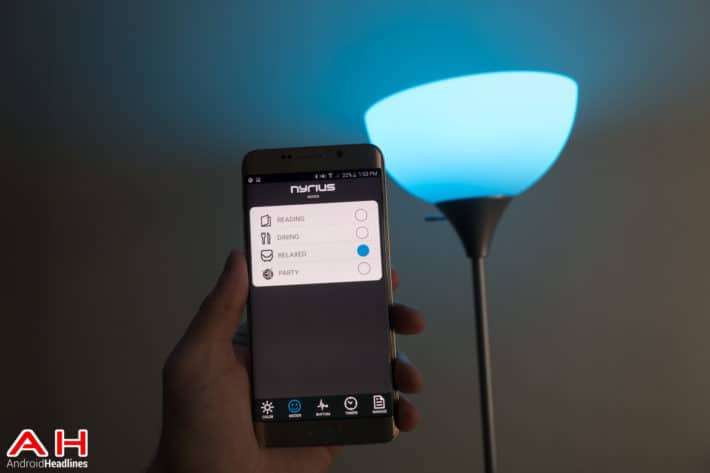 The connected home. That's been a big topic of discussion in recent months and perhaps even recent years. There are many companies out there with connected light bulbs, lamps and various other items. Companies you are likely familiar with include Philips, and Belkin. However, Nyrius have recently jumped into the world of the connected home. Earlier this year we reviewed their Smart Power Outlet, and we had a pretty pleasant experience with it. While the app was pretty barebones, it did everything it needed to do. Which was mostly just turning on or off the outlet and setting timers. Now we're taking a look at their Smart LED Bulb. Which is on sale on Nyrius' site for $40. That seems like a lot for a light bulb, but is it worth that price? That's the question we are going to attempt to answer in this review. So let's get started.

The Nyrius Smart LED Bulb comes in a pretty small package, and does include some instructions, but how many are going to read them? Although setting it up is easy as can be. Simply put the bulb into a lamp or light fixture, download the app from Google Play or Apple's App Store (depending on if you are using Android or iOS) and let it search for the bulb. Your phone will connect to the bulb using Bluetooth 4.0. It's pretty simple, and you can also choose to disconnect the bulb from your smartphone there. On the main page of the app, you'll see the smart bulb, as well as a lot of empty space. This is because you can control multiple Smart LED Bulbs all from the same app. So if you have them throughout the house, you can control all of them there. You can also set them up as a group and turn them all off at the same time. Or just to have the same settings for multiple light bulbs throughout the house. Pretty neat, and something many other companies that produce smart lightbulbs are also doing. You can control up to 8 of Nyrius' Smart LED Bulbs with one device. So if you have a big house, you may not be able to have every light in your house use a Nyrius Smart LED Bulb, but for most people it will be enough.

Now tapping on the Smart Bulb in the app, you are greeted with a ton of other features. In the first tab, you can choose to have it glow a specific color, and the choices here are endless. The purple color looks really great at night, when there is no sunlight in the room. During the day with sunlight coming in from the windows, it doesn't appear to really light up the entire room for some reason. The next tab is for moods. You can set the Smart LED Bulb to a number of moods, from eating dinner, to reading to relaxing or partying. The Partying one is my favorite, and you can take full advantage of it in the "Rhythm section", as it blinks through all the lights, and if you are playing music from another app on your phone, you can have the music change the colors from the lightbulb. Pretty cool, if you ask me.

Under the settings tab, you can rename the bulb, as well as choose to have the light blink when a call comes in your phone. You can also have the light come on in the morning as a sort of alarm, although I'm not sure I'd be a fan of a light waking me up in the morning. But Nyrius does say that it will slowly go from dim to bright. So at least it doesn't just turn on at full brightness when it's time wake up. Overall the app, is a work in progress. There have been a few times where I couldn't get the bulb to connect to the app on my phone. And I had to go turn on or off the light the old-fashioned way. Which isn't a huge deal to me, but that doesn't make this a smart bulb. Now this is Nyrius' first stab at making an app for this bulb, so we'll give them a bit of a pass, at least for now. But it definitely needs better connectivity. Other than that, we had no issues with the app. While it's not the prettiest looking app out there, it did its job.

The Nyrius Smart LED Bulb looks pretty similar to any other smart lightbulb out there. It has a somewhat tall base – compared to normal light bulbs – and the actual bulb portion looks to be a bit small. And it just fits into a normal light socket. Nothing to fancy or difficult when it comes to that. While it doesn't integrate with as many apps and services as Philips' Hue lights do or Belkin's WeMo stuff, it does work pretty well for a first time product from Nyrius. It would be nice to have the light a bit brighter, but overall there's not much to complain about here from the Nyrius Smart LED Bulb.

Not sold on having connected lightbulbs in your house? Well here are a few things to think about. Ever got into bed and forgot to turn off the light downstairs? Well with a connected lightbulb, all you need to do is unlock your phone and switch it off. Or how about leaving the house to go out of town or going to be away for a few hours, you can turn off the lights from your phone, and then turn them on before you arrive back home. Connected lights are pretty spectacular. Now these are mostly first-world problems. But still some really good reasons to start looking at a connected home.

As of today, the Nyrius Smart LED Bulb is available on their website, starting at $39.99. While you're at it, pick up their Smart Outlet as well. That one is also going for $39.99, and can turn just about anything into a smart connected device.