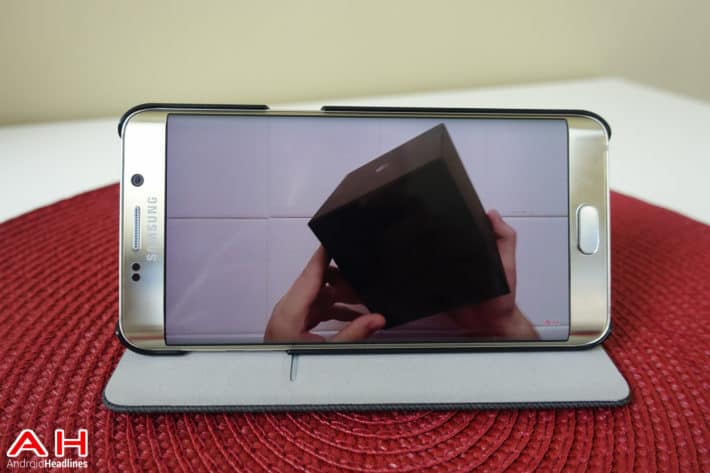 The Samsung Galaxy S6 Edge+ has an amazing display. Of course, you don't need me to tell you that. Which makes it a great device for consuming media and such on it. And what do you know, we have a ton of videos on YouTube you can start with. But, I'm not sure about you, I don't like holding a phone and watching a video for long periods of time. Which is why I like phones or cases that come with kickstands. It's why folio cases have a love-hate relationship with me. I love the fact it has a built in kickstand which is great for watching movies and such. But I never really was a fan of flip cases. They just seem to get in the way. Sure you can fold the front back, but then it'll be in the way when you want to use the camera, and you just have the front dangling down. The Lancaster here from Incipio is a great case though. Many folio cases are pretty thick, but don't really provide a ton of protection. However the Lancaster is not that thick, and provides a decent amount of protection, for relatively the same price as others out there.

Flip cases like the Lancaster are double-edged in my opinion. While I do not like flip cases, having a built in folio for the Galaxy S6 Edge+ is definitely a great idea. In fact I was recently able to use it on a flight to watch a movie on my Galaxy S6 Edge+.  Being able to sit it on a table in landscape mode with it tilted a bit makes it really easy to watch a video no matter how long it is. And as good as the display is on the Galaxy S6 Edge+, you've gotta take advantage of it. That Quad HD Super AMOLED display is amazing for watching movies and TV Shows.

Unlike many folio cases available today, the Lancaster from Incipio is not leather. But it is still quite rugged. The back of the Lancaster case does pop out a bit. This is to keep the case as thin as possible, but still act as a folio case. It's pretty neat actually. It's easy to pop out without making yourself think that you're going to break the case at all, that's the last thing you'll want to do. On the inside cover there is one pocket. So you can probably stuff some cash in there, but not a whole lot else. Other Folio cases typically have 3 slots there where you can have a debit card, credit card, driver's license or some cash. It's pretty convenient for those times that you don't want to carry around your wallet. Just bring your phone with you. Many Folio cases are made of Faux Leather, Incipio has gone with a rigid texture here on the Lancaster, that actually feels rather nice. I prefer it over the Faux Leather we see on other cases, actually. The frame is actually a hard plastic, while the rest of the back and the flip portion is a rigid texture.

Here on the Lancaster we don't actually have any cut outs. Basically both the top and bottom are full exposed. The case is mostly only holding onto the corners here. This makes it easy to get access to the 3.5mm headphone jack, speaker, micro USB port and the microphones. Not to mention you'll be able to still use the edge of the display for things like People Edge and App Edge, which we'll talk about more in a minute. However the left and right sides are covered up, with cut outs for the power button and volume rocker here. Making it easy to use any of the buttons, however you can only press the power button when the case is folded over. That shouldn't be much of a problem. I can't think of a time when I needed to use the volume rocker without having the display on, which you'd want to open the case anyways.

We've taken a look at a few Galaxy S6 Edge+ cases already, including a few from Incipio. The Lancaster is one of my favorites. While I'm not a fan of flip cases, I could get used to this one. It's not as thick as some other folio cases, and it feels nicer in the hand. Additionally, it provides a bit more protection than some of the other folio cases we've seen in recent months. While it's still possible to drop the Galaxy S6 Edge+ and cause some damage, it's pretty unlikely with the Lancaster. Incipio offers the Lancaster in four different colors. We're looking at a black, blue, pink and gray for colors. Which look pretty nice actually, but I think I'd prefer the black color which we have here on the Galaxy S6 Edge+.

Currently, you can pick up the Incipio Lancaster case for the Galaxy S6 Edge+ from Incipio's website for just $35. It may seem a bit pricey, but Incipio's products are quite good, quality wise, compared to the number of folio cases you'll find elsewhere that are much cheaper. They are also available on Amazon for the same price, in all four colors (Black, gray, blue and pink), also available with Amazon Prime shipping. So if you want your case sooner, it would be recommended to pick it up from Amazon, as you'll get free two-day shipping if you are an Amazon Prime member.