Skip to content
Trusted By Millions
Independent, Expert Android News You Can Trust, Since 2010
Publishing More Android Than Anyone Else
31
Today
183
This Week
556
This Month
3812
This Year
113859
All Time

As you all know by now, Samsung has basically released four flagships this year. The two smartphone flagships have launched back in March, Galaxy S6 and S6 Edge, while the phablet flagships arrived last month (Note 5 and S6 Edge+). That being said, all of these devices are fueled by the very same processor, Samsung’s 14nm Exynos 7420 64-bit octa-core SoC. That processor is regarded as one of the best mobile chips this year, if not the best. As we’re waiting for Qualcomm to release the Snapdragon 820 so that we can see what’s it capable of, another Samsung-branded device surfaced on Geekbench sporting a chip that is even more powerful than the Exynos 7420, read on.

Now, the Geekbench listing mentions ‘samsung LUCKY-LTE’ device here, and we still don’t know if this is a smartphone or a tablet considering the listing doesn’t really share much spec info. All we can find out from the listing is processor details and the fact that this device rocks Android 5.1 Lollipop, 4GB of RAM and that it is 4G LTE enabled. That being said let’s put more focus on this SoC, shall we. The Exynos 8890 located on the inside of this device score 1409 in single core, and 4882 in multi-core tests. For comparison’s sake, Exynos 7420 managed to scored 1305 in single core, and 4382 in multi-score tests. This is an ARMv8 octa-core processor, and it is underclocked at 1.3Ghz here.

So, this will be a high-end device, no doubt about it. The Exynos 8890 chip will be even more powerful than the Exynos 7420 which is still one of the best mobile chips out in the market. Now, the only questions that remains is, which device is this? We don’t know if we’re looking at a smartphone or a tablet, nor which Samsung line of devices will it belong to. Samsung has already released most of their premium offerings this year, so… which device is this? Well, it is possible that Samsung intends to release new Note tablet(s) or something like that, or perhaps this is an early look at the upcoming Galaxy S7? Either way, we’ll probably get more info when it comes to this soon, so stay tuned. 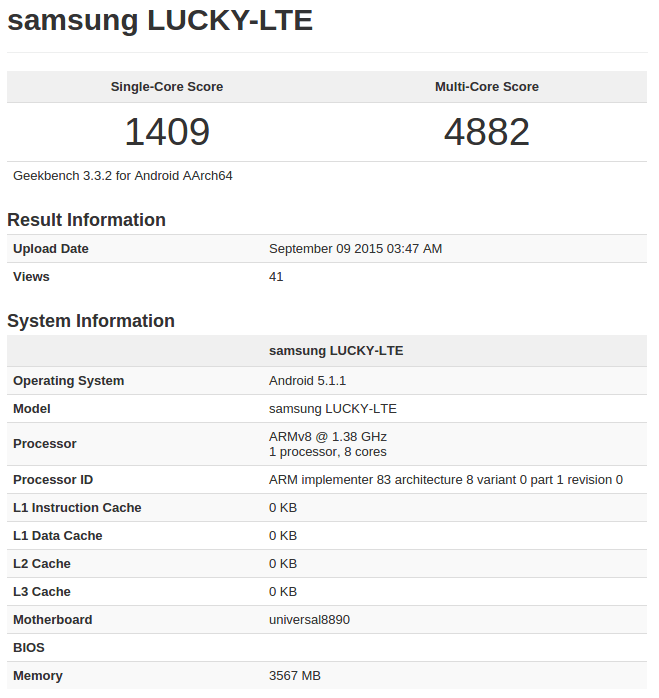