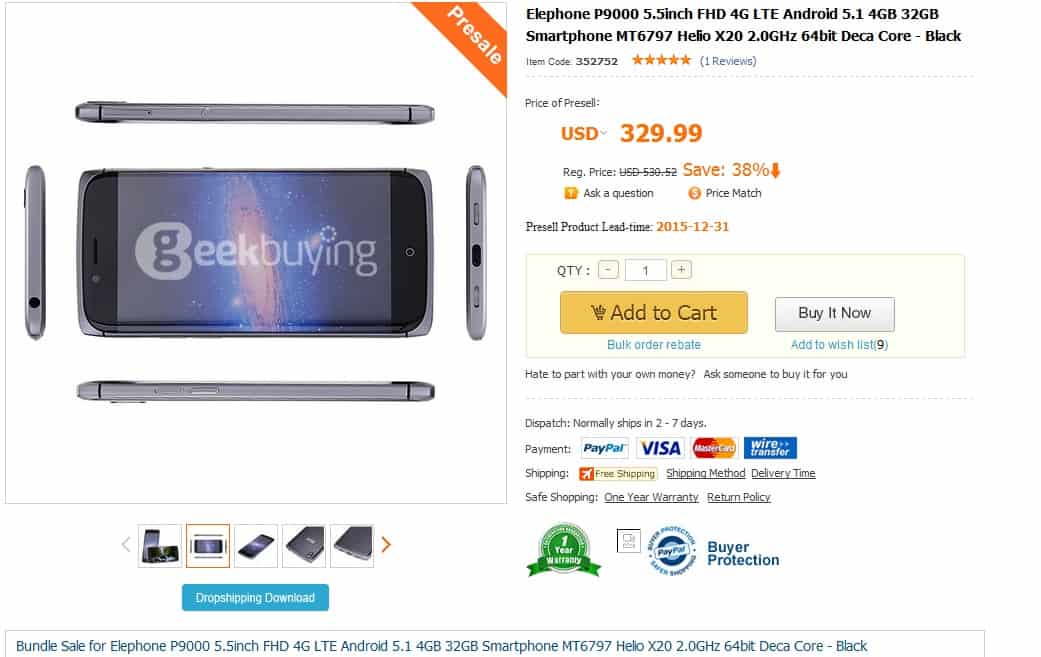 Elephone's P7000 and P8000 smartphones are already out in the market, and both are fairly popular gadgets in the company's home base of China. There have also previously been rumors that the company was about to launch the next installment in the series – the P9000 – at some stage during this year. Seems like that time isn't very far away, as the device is now listed for pre-order at $329.99 on e-commerce site GeekBuying, which gives us our first look at the possible hardware specs of the upcoming gadget. If the listing is to be believed, one of the most interesting features about the upcoming handset from Elephone is that it will be one of the very first devices to pack MediaTek's next generation flagship SoC, the Helio X20 (MT6797), which has an embedded deca-core CPU as its USP. The chipset is meant to supersede the current top-end Helio X10 (MT6795) as the preeminent chipset from the MediaTek stable, and its much talked-about embedded CPU comes with eight Cortex A53 cores and two Cortex A72 cores. On Wednesday, the Acer Predator 6 gaming smartphone became the very first officially-announced device to be powered by the Helio X20, when it was unveiled by the Taiwanese company at the IFA 2015.

As for the Elephone P9000 listing on GeekBuying, the e-commerce site suggests the upcoming device will feature a 5.5-inch IPS OGS Display with a resolution of 1920 x 1080 pixels, giving the display panel a 401 dpi pixel density. The handset is believed to be powered by Mediatek's Helio X20 (MTK6797) SoC as mentioned above. The much talked-about deca-core processor on the chipset is clocked at a maximum frequency of 2.0 GHz, and alongside the brand new CPU, the SoC also comes with ARM's brand new Mali-T880 MP4 GPU. The handset is also believed to ship with 4 GB of LPDDR4 RAM and 32 GB of inbuilt storage. As for the imaging credentials of the listed smartphone, the handset will sport a 16-megapixel primary camera on the rear and a 13-megapixel front-facing selfie-cam in keeping with the trend of ever-larger sensors on the front cameras for better selfies.

Network connectivity includes 4G LTE, with support for dual SIM, dual standby feature. The phone supports the following network frequencies, according to the GeekBuying listing: 2G (GSM) is supported on bands 850, 900, 1800 and 1900 MHz; 3G (WCDMA) is supported on 850, 900, 1900 and 2100 MHz; while 4G (FDD LTE) is supported on 800, 1800, 2100 and 2600 MHz bands. There is no mention of any support for TD-LTE at this point in time, but that could change as we get to know more from the official announcement from Elephone, which cannot possibly be that far away. Coming to the included sensors on the phone, GeekBuying has listed only three of them – gravity, light and proximity sensors, but it's highly unlikely that the device will ship without at least an accelerometer. At this price-point, it is also highly likely that the device will come with a gyroscope, but that will only get cleared up once Elephone makes the handset official. The listing meanwhile, also says that the smartphone will feature Bluetooth 4.0 connectivity, a 3,100mAh battery, a fingerprint scanner and run Android 5.1.1 Lollipop out of the box.