Skip to content
Trusted By Millions
Independent, Expert Android News You Can Trust, Since 2010
Publishing More Android Than Anyone Else
23
Today
132
This Week
222
This Month
8363
This Year
125840
All Time 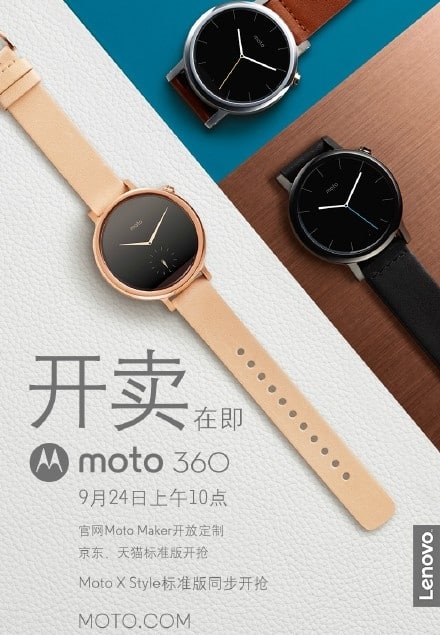 The Moto 360 from Motorola was one of the (if not the) most popular smartwatches of the last year. As such and leading the way in what clearly seems to be a round watch revolution of late, the second generation Moto 360 was a device which was highly talked about prior to its official unveiling. Needless to say, when it did launch, it did so to much attention and a generally welcomed reception.

That said, the second gen Moto 360 has hit the headlines recently for a different reason too. The other reason is that this looks set to be the first Android Wear device to launch in China. This in itself will mark a milestone and seems likely to be a building block in helping the relationship between Google and China. While most speculate that Lenovo’s purchase of Motorola will be one of the factors that has helped to contribute to this move, either way, the Moto 360 does look en route to the country. Albeit in what will be a reduced form as it seems the Moto 360 will not be able to make use of some of Google’s more native Android Wear functions and services.

Well, the latest on the Moto 360 launch in China is that the device will begin the launch tomorrow. Lenovo sent out an image on the Chinese social media outlet, Weibo, and the image clearly details that tomorrow, September 24th, will be the day in which the Moto 360 becomes available in China. According to the image, the device will go on sale at 10 am (local time) and reports detail it will be available in all major online stores. As well as directly from Motorola too. According to details coming in, the Moto 360 will cost 1,999 Yuan (roughly $315) for the 42 mm variant and 2,199 Yuan (roughly $345) for the 46 mm variant. Of course, how well the Moto 360 does in China will be dependent on how well it sells. As this is the first Android Wear device to be launched in the country, many eyes will be watching to see the impact of the Moto 360 once it does become available. With only a few hours until the launch time does begin, it looks like it wont be long before the impact of the Moto 360 and therfore, Android Wear, in China will start to become known.