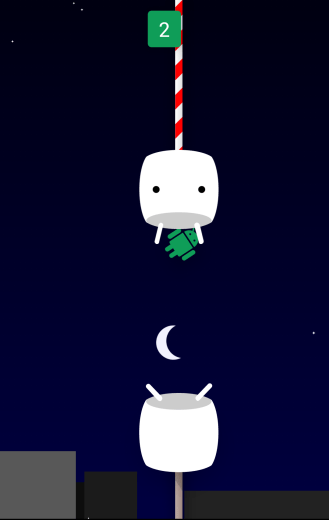 Here we are on the third developer preview for Android M, which has been announced as Android 6.0 Marshmallow now. Typically, Google has Easter eggs inside each version of Android, usually a bit different from the last. With Lollipop, we actually got a Flappy Bird style Easter Egg – mind you, this time last year, Flappy Bird was making a ton of cash off the ads and its popularity. This year, it looks like the Easter Egg still has some of the same mechanics as Flappy Bird, but it’s still different.

The Easter Egg is largely the same as last years. Instead of the Android robot sneaking in between giant sized Lollipop, it’s doing so between giant Marshmallows. Which seems like a good idea seeing as that’s the name of this version of Android. It’s a neat little game that is built into your Android smartphone, it’s a good time waster, in case you’re at the doctors waiting and are bored. Which will inevitably happen.

Android 6.0 Marshmallow is due to be officially announced – again – on September 29th. At least that’s the date that is being rumored for a Nexus announcement, which is also when we will see the latest version of Android, obviously running on those new Nexus devices. Marshmallow, while didn’t seem like a huge update at Google I/O, is actually turning into a rather large update for Android. With new back up features and much more. While the design hasn’t changed much in Android 6.0, there are a lot of new features, and as always a ton of performance tweaks and bug fixes. Once Google uploads the code to AOSP, we’ll get a very lengthy changelog telling us everything that’s new, even the stuff we didn’t want to know about.

Google typically releases the new Nexus devices and new versions of Android through a series of press releases. But this year, it appears that they are looking to have a nice event in San Francisco for the press to attend and get hands on with the new OS as well as the new hardware from, what appears to be, LG and Huawei. There hasn’t been a Nexus event since the Galaxy Nexus, almost 4 years ago.