With Android 6.0 Marshmallow there are due to be a collection of new features and functions which make their way to the Android operating system to a handful of devices, and many of these can already be experienced by users, thanks to the series of developer previews of Android M that Google has pushed out since they announced Android M officially back during Google IO 2015 earlier this year. One of those new functions which appears to have been present since the second developer preview relates to emergency calls, although we can’t stress enough that this information is simply to alert users so they’re aware of it and not something that should be tested.

When dialing 911 the situation isn’t always calm and it can be difficult to comprehend everything happening at the time due to high-stress levels. That’s why the newly enabled feature in the preview is so important. When users call 911 (or whatever their emergency number is in the country or region they reside) the screen will now display an overview of Google Maps with the name listed for the emergency service center they’re connected with during a call, and the information on the map is the current location of the caller so they can more easily give those specific details to the emergency dispatch person on the line with them, which could end up helping those who are dispatched out to that location to possibly get there quicker.

It’s worth noting that the screenshot is likely from a user who had to make an actual emergency call and thought this information was relevant, but it’s also important to point out that they used the stock dialer app, which suggests that this type of information will only be available to those who are using the stock Android dialer on Android 6.0 Marshmallow when it launches (or those who are on the Android M Developer preview). Whether or not this is an Android M only feature or not is unclear but that’s the way it appears. it’s also unclear as to what regions Google will be making this feature available to when Android Marshmallow starts rolling out, but the U.S. was mentioned as a supported location and the screenshot is from a user in Pakistan so it would be safe to assume that Google has plans to integrate this feature to users internationally. 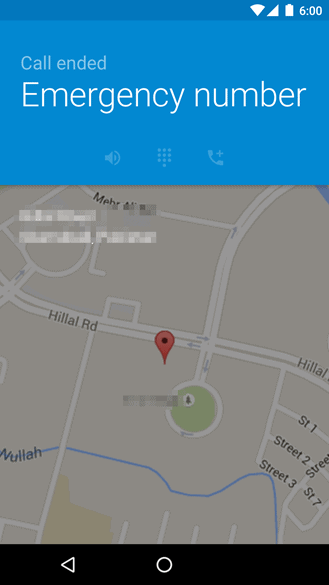