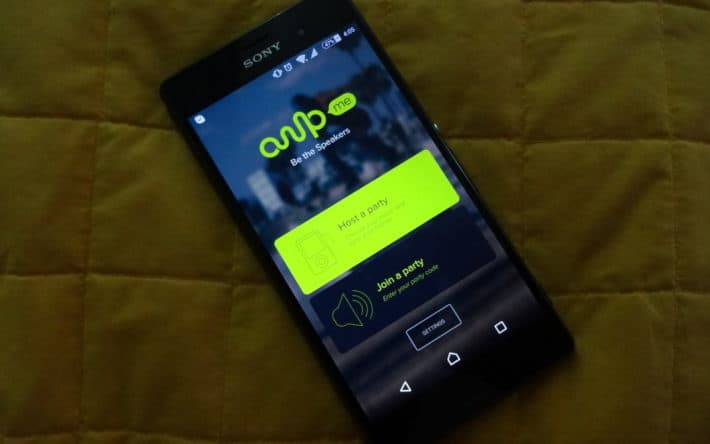 When it comes to the sound of mobile devices, we're usually left with much to desire. More manufacturers are including front-facing stereo speakers to provide a more immersive experience while watching a movie or gaming. HTC's BoomSound technology is considered among the best sound experiences on smartphones, but still it won't be as good as the sound coming from a Bluetooth speaker or external audio equipment. Now, there's an app called AmpMe that allows mobile devices to play a song from various mobile devices simultaneously, each working as a single speaker. Granted, it won't provide extraordinary sound, but at least each person will be closer to their own smartphone instead of relying on the sound of a single device placed in a certain spot.

Unlike some speakers that create a similar effect using Wi-Fi or Bluetooth technology, AmpMe works by making the devices "listen" to what the Host is playing, so even some speakers with microphones could work. To join the party, users just need to have the app installed and then type in the 4-digit code provided by the Host. While they don't need to be sharing the same connection, they have to be connected to the internet to stream the content. Of course, the Host gets to control the party, as he can switch to the next song, pause it, or end the party altogether. Meanwhile, the rest of the party members are left with a simple interface showing the album art and information about the song, a button to leave the party on the top left corner and a Resync button on the bottom left corner and a volume button on the bottom right corner.

Currently, the app only works with Soundcloud, but the founder of the company said they want to work with additional streaming services. In practice, the sound can be delayed for a split second and it is definitely noticeable, creating some sort of echo effect, so users might be resyncing a couple of times before getting any latency, which might be annoying. Plus, using different devices with their own sound configurations could create a weird experience. Still, the app has some potential and the technology behind it could end up being used in other ways of communication such as teleconferencing.