Back in July, OnePlus CEO confirmed that the Chinese manufacturer would be launching two devices this year. Since the highly-anticipated OnePlus 2 was unveiled on July 27th, the focus is now on what is coming next. Recent leaks and rumors suggest the company is working on a OnePlus 2 Mini handset, a scaled down version of their flagship. Yesterday, there was a clue on what the phone might look like, as two mysterious 3D renders showed up on a Chinese website. Today, we have some tips on the hardware side, as an alleged AnTuTu test surfaced online, showing us some of the possible specs.

The device is called OnePlus A2301 and comes with 2 GB of RAM, powered by a MediaTek MT6795T processor running at 2.2GHz and a PowerVR Rogue G6200 series GPU. The gadget features 32 GB of internal storage and a 13-megapixel main camera. There are no clues on screen size, although the resolution is 1920 x 1080. The OnePlus 2 sports a 5.5-inch display, so the Mini panel should be smaller than that. The 3D renders previously mentioned show a Type-C USB 3.0 connector and a fingerprint reader on the back, as opposed to its bigger sibling that comes with a front sensor. There’s also a two-camera set and dual-LED flash below them. The system featured on the tests is Android 5.1.1 Lollipop and if the device really comes to life, it is most likely to come with the company’s custom Oxygen OS on top of Android.

It is important to take this leaked data with a grain of salt since it is not hard to fake an AnTuTu test. Nonetheless, these benchmark numbers put the phone on top of big names like the Meizu MX4 and Galaxy Note 4, although previous reports suggested that the device could be a mid-range. As for the possible price, the OnePlus 2 starts at US$329 and this new handset is likely to have a lower price tag. This isn’t the first time we heard rumors of a smaller device coming from OnePlus, as last year a similar buzz was going on. However, in the end, nothing came up from them. Although the company didn’t release any information to date, we are about to enter the last quarter of 2015. As such, it shouldn’t take too long until the Chinese manufacturer reveals what they are baking in secret, so stay tuned for more news. 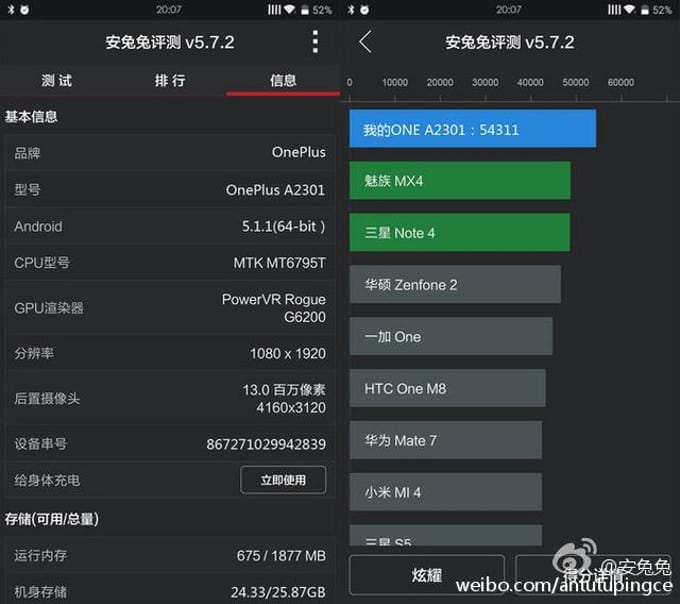