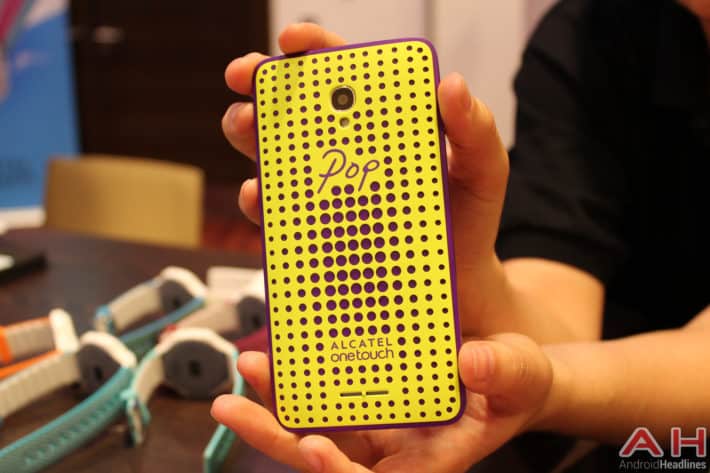 Alcatel OneTouch has been making a bunch of announcements today at IFA and it looks like they are not quite finished yet as the company has now announced a new device joining their popular POP range of devices. The latest addition comes in the form of the highly customizable POP Star and looks to combine function with fashion by offering an extremely large selection of customization options, thanks to the POP Star's removable back. According to Alcatel OneTouch Chief Designer, Cheol Woo Park, "POP STAR is our most fashion-forward smartphone with a large collection of covers, consumers can choose the cover they like and fully express their own style."

For instance, the choice of customization means that you can be as funky or as professional as you like with your smartphone by changing the cover from the psychedelic designs of their Funky Collection to the more serious tones from their Leather Collection or simply being en vogue with their Fashion Collection. Ensuring your smartphone not only suits you, but also your environment on any given day.

In terms of what is on offer, the POP Star comes with a 5-inch HD IPS display with a 1280 x 720 resolution. Inside, the POP Star is equipped with 1GB RAM and powered by a MediaTek (MT6580) quad-core processor (clocking at 1.3 GHz). In terms of storage, the device is equipped with 8GB internal storage as standard, although, there is the option to expand thanks to the inclusion of a microSD card slot (up to 32GB). Moving to the camera side of things and the POP Star is equipped with an 8-megapixel rear camera (with LED flash and Autofocus) as well as a 5-megapixel front facing camera. Everything is powered by a 2,000 mAh battery and the device comes running on Android 5.0 (Lollipop) out of the box. Alcatel OneTouch has also announced that the POP Star will be available in two versions, a 3G version and a 4G LTE enabled version and both are on show at this year's IFA event for those who would like to check them out. While the majortity of the specs are the same, the 4G version runs on a MediaTek (MT6735p) quad-core processor (clocking at 1.0 GHz).

At present Alcatel OneTouch has yet to provide any details on pricing or availability for their newly announced POP Star smartphone.