The availability of Consumer-grade smart, connected devices beyond the humble PC is not exactly news circa 2015. The smartphone has become ubiquitous over the past several years, and increasingly, the concept of smart wearables like watches, glasses, headsets, wristbands and other such gadgets are entering the consciousness of mainstream consumers, even as not everybody is quite ready to put down the cash just as yet. Many industry watchers and technology enthusiasts are becoming increasingly bullish on smart wearables. Smartwatches have been on the market for a few years now, although, they've only recently started to transcend the archetypal early-adapter niche and enter the consciousness of the mainstream consumer. While smartwatches right now form the major chunk of a still nascent market in its formative stages, other product categories are also believed to contribute greatly to the wearable electronics segment, including comparatively inexpensive fitness trackers etc. as the market evolves to gain more mainstream acceptance. Or at least that's the hope anyways.

International Data Corporation (IDC) has now weighed in on the topic and through the findings of a study released on Monday, the market analysis firm tries to forecast the prospects, evaluate the opportunities and explore the challenges facing the industry, going forward. The study suggests that by the year 2019, wearable electronics will grow at a compounded annual growth rate (CAGR) of 22.9 percent, thereby accounting for total shipments of over 173.4 million units. According to Mr. Jitesh Ubrani, Senior Research Analyst for IDC's Mobile Device Trackers, "Driven by advancements in user interface (UI) and features, smart wearables are on track to surpass the lower priced, less functional basic wearable category in 2018. Smart wearables will quickly move from a smartphone accessory primarily focused on notifications to a more advanced wearable computer capable of doing more processing on its own".

While for this year, IDC predicts the Apple Watch to be a runaway winner over and above the market reach of Android Wear, the study does seem to indicate the preeminence of Android Wear as the platform of choice for consumers going forward. The adoption of Android Wear by consumers will be buoyed by competition from a large number of OEMs, and the availability of a "broader and deeper selection of devices at multiple price points that will appeal to a wide audience". By 2019, the report claims, Android Wear will significantly outsell Apple's WatchOS offerings, shipping as many as 40 million devices as opposed to just the 4 million this year. As for Kickstarter success story Pebble Technology, the California-based smartwatch maker will supposedly lose a large chunk of its market share but still manage to nominally increase its aggregate shipments as of 2019, if the study is to be believed. Compatibility with Android and iOS, along with affordable pricing will make sure that Pebble will continue to remain a player in the sector, if only a small one. Things however, may get tougher for Samsung's Tizen OS, and the only way the South Korean company can remain relevant is if the open-sourcing of Tizen and making its Gear smartwatches compatible with Android and iOS can win over new customers and developers.

Delving deeper into the company's study on the subject, the Research Manager at IDC's Wearable division, Mr. Ramon Llamas, said, "We are at a stage now where more vendors are getting into this segment, setting the stage for more selection and ultimately more volumes. Potential buyers wary of what is currently available will most likely be more interested once the second- and third-generation devices come to market with improved hardware and applications. From there, word-of-mouth and user-ambassadors will help to spur interest. Looking ahead, customers will need to pay close attention to the different operating systems that power smart wristwear. Different smart wristwear operating systems are compatible with certain smartphone operating systems, and sometimes with specific models. Beyond that, experiences and available applications will widely vary. Just as competition exists for different smart wristwear models, this competition carries over into the operating system landscape". 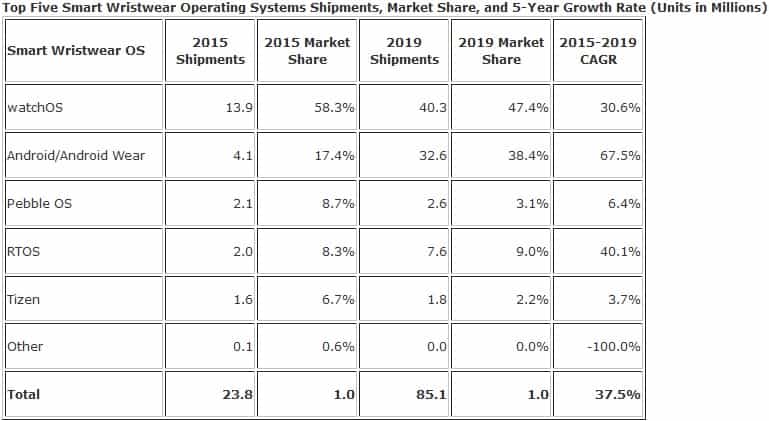 Sponsored Video
Advertisement
Trusted By Millions
Independent, Expert Android News You Can Trust, Since 2010
Publishing More Android Than Anyone Else
17
Today
91
This Week
605
This Month.
8049
This Year
109521
All Time
Advertisement