Xiaomi has finally launched the Redmi Note 2 a couple of days ago. This handset has been leaking all over the place for the past couple of months at this point. The Redmi Note was announced back in March 2014, and for some reason Xiaomi decided to wait way over 1 year to announce its successor. That being said, Xiaomi has also showcased their new MIUI version during the press conference, the MIUI 7. We've already covered both of these launches quite extensively, and are here to talk a bit more about the Redmi Note 2, Xiaomi's newest mid-ranger.

You've probably heard of 'Flash Sales' which are very popular in China. These are scheduled sale events by the companies, in which they sell a limited number of a specific handset, and in the vast majority of cases less than 10% of people who registered for a flash sale actually managed to purchase the device. A ton of China-based companies actually use this sales format, and they usually sell less than 100,000 units per flash sale. Well, Xiaomi has managed to surprise us once again, China's number one smartphone OEM has managed to sell 800,000 Redmi Note 2 handsets in 12 hours, read on.

The device was offered for a flash sale on Sunday, and 12 hours later 800,000 consumers actually managed to purchase the device. This is somewhat surprising considering nobody expected that Xiaomi will manage to secure 800,000 units to be sold in one flash sale, which suggests that the company seriously increased their production capacity. The Redmi Note 2 comes in 16 and 32GB (internal storage variants. The 16GB variant is called the Redmi Note 2, while for some reason, Xiaomi has decided to name the 32GB model Redmi Note 2 Prime. The device is powered by MediaTek's Helio X10 (MT6795) 64-bit octa-core SoC, and it ships with 2GB of RAM and a 3,060mAh battery. The 13-megapixel camera is located on the back of this phone (PDAF included), and a 5-megapixel shooter is available up front.

The Redmi Note 2 is currently available only in China, but it might launch in other areas within Asia, like India for example, though Xiaomi might be forced to launch the Snapdragon variant of the device in India due to legal issues. Anyhow, Xiaomi will launch the international variant of MIUI 7 on August 19th, so the Snapdragon-powered Redmi Note 2 might be announced at that very same event as well. 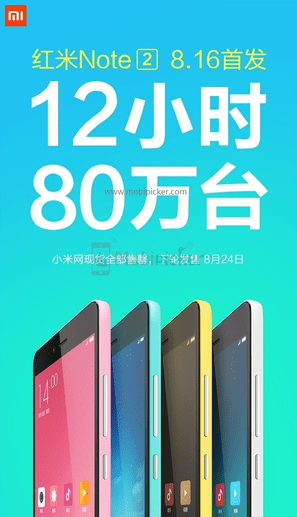